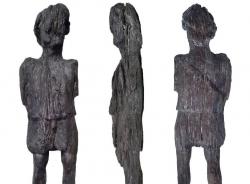 Buckinghamshire - An extremely rare early Roman period carved wooden figure has been unearthed in a water-filled moat in Buckinghamshire, the latest unusual discovery in the UK’s largest archaeological excavation along the 150-mile HS2 railway. The statue, which is 67 cm high, is carved from a single piece of wood. Archaeologists said its preservation was “incredible” given its age and material, but the lack of oxygen in the trench helped prevent rot over many centuries. The figure was found in a field near Twyford, wearing a knee-length jacket that appears gathered at the waist. He may be hat-wearing, have styled hair, and have well-defined legs, although the feet and arms are deteriorated below the elbows. Pitt said the carved wooden figure was a “remarkable find.” “It is really rare to find carved woodwork in the Romanesque style in Britain. Even in its broken and rolled state, it has something in the setting and in the dress that suggests it was probably Roman.” The figure will be subject to analysis and preservation in York Archeology. The piece found broken in the hole will be radiocarbon dated to establish an exact date to the wood.

La Cuesta - An ancient collection of Roman coins was revealed by an archaeologist a little differently than usual. The explorer in question is a badger, who was probably looking for food in the cave of La Cuesta in Asturias, northwest Spain. The animal, dissatisfied with the metal plates, ended up dropping the objects around its den. In total, 209 coins dating between the 3rd and 5th centuries were recovered. According to the researchers, the coins originate from places like Antioch, Constantinople, Thessalonica and even London. The full investigation was published in the scientific journal Journal of Prehistory and Archeology. The pieces seem to be part of a larger set, which has disappeared over time. Archaeologists suggest they were placed in the cave during times of political instability. In the 5th century, the western part of Asturias was invaded by the Suevi people, which may have led part of the population to hide the coins for fear of theft or attack.

Brandenburg - A volunteer archaeologist has discovered an ancient stash of Celtic coins, whose "value must have been immense," in Brandenburg, a state in northeastern Germany. The 41 gold coins were minted more than 2,000 years ago, and are the first known Celtic gold treasure in Brandenburg. The coins are curved, a feature that inspired the German name "regenbogenschüsselchen," which translates to "rainbow cups." Just like the legend that there's a pot of gold at the end of a rainbow. Another piece of lore is that rainbow cups "fell directly from the sky and were considered lucky charms and objects with a healing effect" . By comparing the weight and size of the coins with those of other ancient rainbow cups, Pilekić was able to date the hoard's minting to between 125 B.C. and 30 B.C., during the late Iron Age. At that time, the core areas of the Celtic archaeological culture of La Tène (about 450 B.C. to the Roman conquest in the first century B.C.) occupied the regions of what is now England, France, Belgium, Switzerland, Austria, southern Germany and the Czech Republic, Pilekić said. Of the 41 gold coins, 19 are coins known as staters, which have a diameter of 0.7 inches (2 centimeters) and an average weight of 0.2 ounces (7.3 grams), and 22 are 1/4 staters, which have a smaller diameter of 0.5 inches (1.4 cm) and an average weight of 0.06 ounces (1.8 g).

Odawara  - Artifacts labeled as “groundbreaking discoveries” from the ruins of structures associated with warlord Toyotomi Hideyoshi’s Siege of Odawara in 1590 could have been prototypes of ninja weapons. Akihiro Iwata, an archaeologist and curator at the Saitama Prefectural Ranzan Historical Museum here, said the flat stones and clay balls may well have been the forerunners of “shuriken” throwing stars and “makibishi” caltrops that later made up ninja arsenals. Flat throwing stones with sharpened corners apparently to inflict damage on enemy forces were unearthed at the ruins of Iwatsuki Castle and the Owada jin’ya administrative headquarters, both in Saitama, between the 1990s and 2000s. A hexagonal stone from the Iwatsuki Castle ruins measured 4.8 centimeters in diameter and 1 cm thick, while 17 stones from the Owada jinya measured 8 to 14 cm in diameter and 1.5 to 3 cm thick. The Siege of Odawara forced the rival Hojo clan to hole up in Iwatsuki Castle before it fell. The Owada jinya, located about 6.5 kilometers away, may have been its branch castle. Four unglazed clay balls were among items excavated at the ruins of Hachioji Castle around 1960. Each ball, measuring approximately 1 to 3 cm in diameter, has four spike-like projections so that one of them points upward, apparently to slow the advance of enemy forces. Hachioji Castle also fell during the Siege of Odawara. “It is possible that the Hojo clan made these getaway weapons after realizing it faced Hideyoshi’s overwhelming force,” Iwata said. He added that the forms of these primitive tools suggest that they may have been the prototypes of shuriken and other weapons used by the feudal-era undercover agents.

Agios Sozomenos - Cyprus’ Department of Antiquities recently announced the results of the archaeological excavation season of 2021 at Agios Sozomenos, the site of a Late Bronze Age settlement. A copper pendant, other copper objects and an extensive system of workshops were unearthed there this past year. This past year’s dig involved the removal of thick layers of earth, including what were once mud bricks, and a layer of a mixture of earth mixed with plaster, which might be proof of the collapse of a roof. After they were cleared away the archaeologists found the wall foundations of the entire complex. They determined that some of the older walls had been reutilized and the rooms were generally enlarged in a later phase of reconstruction.During that time, there were two large rectangular rooms, with the researchers discovering a great deal of scattered material, denoting that these places were once workshops. A large room was unearthed which had an entrance on the northeast, possibly to the street.Both erect and fallen stone slabs at the site indicate that there must have been a stone cistern in the interior, which had been completely dismantled, perhaps like the one found in a good state of preservation in the SE part of the complex. Large quantities of unworked gypsum slabs were also found in this area, as well as different kinds of stones, which the archaeologists say obviously had been brought in from elsewhere for use in the workshops. Traces of clay on the floor may indicate the presence of a hearth, and a small pit lined with stones supported the base of a large storage jar. On the exterior of what the researchers call Wall 804, a large stone trough was found, preserved almost completely intact, measuring 1.20 meters (3 feet) in length and 1 meter wide; only the eastern side was broken. A drainage hole on its west side indicates that it may have been used as a water trough. Part of a stone mold was found, as well as fragments of pithos, with relief decoration in parallel ridges. Some shards decorated in White Slip II, as well as fragments jugs in Plain White Ware, were also found by the archaeologists, alongside other cookware.The archaeologists also uncovered some organic remains at the site, including an olive pip and other objects which were sampled for analysis, including animal bones and teeth.Unfired clay and ceramic ware that was unearthed close to Wall 804 indicate that this part of the workshop complex was used for the production and firing of ceramics. Charcoal was collected from various parts of the complex and there may have been several hearths at various locations which have not been preserved.Below the base of an upturned pithos, a copper pin, another small fragmentary copper object, a pointed stone tool and a stone weight were also found. A circular depression nearby may have held the pithos in place at one time.Stone grinders, mortars, saddle querns, pieces of stone vats, slag and small fragments of copper objects as well as a copper pendant were found in a small area adjoining Wall 851. Gaming stones, which had for the most part been repurposed, were also noted, as well as some sling stones and stone weights.

USA – Clovis fluted points are deemed efficient weapon tips for hunting large game, including Pleistocene proboscideans. However, experimental and archaeological studies cast doubt on their effectiveness as hunting weapons. Owing to the broad and thick tip geometry of Clovis points, their penetration depth into a carcass would have been relatively limited, which would have rendered them unlikely to reach the well-protected vital organs of a proboscidean and inflict lethal wounds. Nor do Clovis points display the types of breakage patterns and impact damage that would be expected were they routinely used as hunting weapons for megafauna, especially when compared with Folsom points found in bison kill sites. Our results question the long-assumed effectiveness of Clovis points for dispatching proboscideans; while these may have on occasion been used as weapon tips on proboscidean prey, they likely had other functions as well.