Oslo - The object was discovered during preparatory works for the medieval park in the Old Town of Oslo. The team previously found a falcon figure in the same context layer whilst excavating a waste layer, in which both discoveries dates from around the 13th century. The latest discovery is a roughly cut wooden object that measures 11.4 centimetres in length, carved with eight runes that has been deciphered by Kristel Zilmer, professor of runology at the Universitetet i Oslo. Zilmer proposes that the text is an owner’s inscription, with the name spelled as ‘asbin’ and probably stands for ‘Ásbjǫrn’, a common Old Norse male name that can be found in medieval writings often written in Latin script. The rest of the text in Norse is ‘á mik’ which means ‘owns me’. The shape of the object suggests that it was used as a label or marker, possibly attached to something to indicate that ‘Asbjørn owns me’ to mark his property, such as goods or personal items. Although we do not know what Asbjørn actually owned, the marker gives us the name of a real person who lived in Oslo in the 13th century, giving an insight into the city’s trading activity during the 13th century. He was probably a trader that operated in the Klemetsallmenningen area of Olso around the harbour, where artisans had their stalls along the streets and sold products such as shoes and boots, combs, iron tools, weapons, fine forging products, turned and made vessels, as well as foods such as bread, meat products and fish.

Tužina  - Iron tools used to mine gold in the Middle Ages have been discovered in the Malá Magura hills outside the village of Tužina in western Slovakia. This is the first direct archaeological evidence that gold mining took place in Tužina. Gold was known to have been mined in other villages in the Upper Nitra area. The discovery of gold in the Malá Magura foothills in the 14th century sparked a gold rush. People moved to the area, staked land claims, panned the river, scoured the surface for gold veins and then tunneled down to pursue them. It ultimately proved a shallow find. 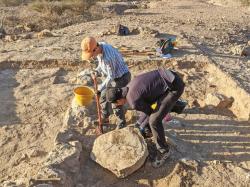 Bat - New archaeological discoveries at the Bat archaeological site in the wilayat of Ibri, Dhahirah governorate. ‘Researchers found a settlement in an area overlooking a valley. Stoves, kilns and burnt seeds have been found in the excavated dwellings.‘These excavations reveal valuable information that can help understand how the people of the Umm al Nar culture lived and thrived at the site for nearly 1,000 years.’ This year, the ministry’s archeology projects are focused on the Bronze Age, including the Umm al Nar culture. Archeologists excavated settlements dating back 2500-2000 BC at two different sites. ‘The site in Bat includes the largest collection of towers and tombs characteristic of the era.

INDE - Yelagiri - Researchers on Saturday discovered Neolithic age tools--dating back to 5,000 years ago--at the foothills of Yelagiri at Chinna Vepambattu near Vaniyambadi. The stones were sharp in the front and polished for the handgrip in the back, indicating the period to be around BCE 2,500 and CE 1000. It was only during this time man evolved to polish and sharpen tools. Also, the nomadic society began to settle near springs in that period, and a sunai (a spring) was found 500m near the tools, the researchers said.

USA – Tucson - A Tucson archaeologist has unveiled a discovery in Santa Cruz County that she thinks could rewrite the history of the Coronado Expedition. Deni Seymour said she has unearthed hundreds of artifacts linked to the 16th century Spanish expedition, including pieces of iron and copper crossbow bolts, distinctive caret-headed nails, a medieval horseshoe and spur, a sword point and bits of chain mail armor. The “trophy artifact” is a bronze wall gun — more than 3 feet long and weighing roughly 40 pounds — found sitting on the floor of a structure that she said could be proof of the oldest European settlement in the continental United States.

Iwatsuk - Hachioji - Artifacts found in Japan may be ninja weapons, including several that look like they were the forerunner to the well-known throwing star, have been found at several sites, including two castles, scientists say. Archaeologists excavated the artifacts between 1960 and 2010 at several Japan sites, including two castles — Iwatsuki Castle and Hachioji Castle. The possible ninja artifacts date to the Siege of Odawara which took place in 1590. During this siege, the Toyotomi and Tokugawa clans defeated the Hojo clan, which had controlled a sizable portion of Japan, and captured both castles.  The siege took place during the Sengoku period (1467-1615), a time when Japan was divided between several warlords who battled for power. Historical texts mention ninjas as spies and saboteurs during this time and they likely took part in the siege. The artifacts include flat throwing stones that may have been the predecessor of the shuriken throwing star and clay caltrops that may be an early form of the makibishi caltrop — a spiky weapon that could injure the feet of soldiers and horses.

Baho Dheri  - The discoveries include a 73-meter high stupa, the largest of its kind so far found in the region, and a rare 10-feet life-size statue of Gautam Buddha, the founder of Buddhism. The stupa, which is 73-meter high, is the largest of its kind found in this region so far. "This statue is not in intact form. We need to work to restore in its original shape," Samad said. Other antiquities include seated Buddha statues, the original floor of the largest stupa dated back to 1,800 years, and a statue in meditation pose, he added. Khan said that the fresh discoveries have added a "new chapter" to the history of the Gandhara Civilization. Emerged in 500 B.C., the ancient Gandhara Civilization sprawled the region, which included Peshawar, Mardan, Swabi, Swat, Buner, and Bajaur situated in the northwest, and Texila in the northeast of today's Pakistan, in addition to Kabul and northern Afghanistan.

Ghagha - Evidence of the earliest known buildings in the Arabian Peninsula, dating back more than 8,500 years, has been uncovered. The finds on the island of Ghagha, west of Abu Dhabi city, includes a number of stone structures. The discovery means that settled life in the UAE began 500 years earlier than previously believed. archaeologists have been conducting scientific analysis of the artefacts since the structures and accompanying objects were unearthed. The extraordinary discovery was revealed by carbon-14 analysis of charcoal fragments, which indicates the structures are at least 8,500 years old.  The structures that have been uncovered are simple round rooms, the walls of which are made from stone and preserved to nearly one metre in height. The rooms were likely houses for a small community who may have lived on the island year-round. Hundreds of artefacts were found in the rooms, including finely worked stone arrowheads that would have been used for hunting. It is likely that the community would also have used the rich resources of the sea. How long the settlement existed is unknown, but after it was abandoned, it apparently remained an important part of the cultural landscape, as nearly 5,000 years ago, a person was buried in the ruins of the structures. It is one of the few burials from this period known on the Abu Dhabi islands. Ramnicu Valcea - Archaeologists recently discovered the remains of an ancient Roman settlement dating from 102-105, located on the border between the Ramnicu Valcea municipality and the commune of Mihaesti - Valcea County; the discovery bears testimony of the coexistence in Oltenia of the Roman soldiers with the Geto-Dacian local population before the beginning of the second Roman - Dacian War. This area was a strategic surveillance point over the road leading to the Horezu Depression, and that troops from the Roman Empire's auxiliary 2nd Cohort Flavia Bessorum were stationed here; excavations have brought to light ceramic vestiges and traces of temporary wooden constructions . "16 building groups have been discovered so far - homes and dump pits where ceramic fragments, broken pots, animal bones were thrown after being consumed. It is certain that the settlement was well alive between the years 102 and 105, because this was a strategic point connecting to the Horezu Depression. After the year 105, the second Roman-Dacian War began, the whole settlement was conquered and the Romans withdrew from this area. This place is linked to the Buridava Castrum power center (located in the Stolniceni district of Ramnicu Valcea municipality," said Claudiu Tulugea, adding that archeological research at this site will continue.