St. Augustine - Preliminary analysis revealed Wednesday the ethnicities of the skeletons found in an archaeological dig in St. Augustine, the archaeologists working at the site say. The early results indicate one skeleton is a male of African descent and the other skeleton is a European female. Archaeologist Carl Halbirt says the skeletons in a downtown St. Augustine dig site are old enough to be the first colonists St. Augustine, dating between 1572 - 1586. That's less than 21 years after St. Augustine was founded. The skeletons have good teeth, and archaeologists say that is one indication they may have been younger. How young? It's unclear. Halbirt says they probably aren't younger than 18. Again this is preliminary information - more analysis needs to be done to be certain about his ethnicity and age. These two skeletons are within inches of each other, and both were buried under the floor of the first documented parish church in the U.S. Both were buried in the Christian style with the heads in the east and feet in the west, Halbirt says.  He says it would not be uncommon for a European and an African to be buried close to each other in the same church.  Spanish Catholics were buried under the floor of churches, regardless of race.   Halbirt also says the man may not have been a slave, but his occupation is not known yet.  He says when a bio-archaeologist does more testing, he can possibly determine if these  people were subject to physical demands. 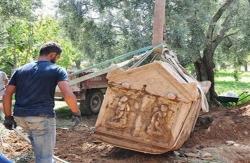 Bursa - An olive grove in Bursa, Turkey has revealed what experts are hoping is just the beginning to a treasure trove of ancient Greek archaeology. In an area where previous items have been discovered, experts have now reported that three ancient burial chambers from the Late Antiquity period are the latest discoveries in the olive grove, and reportedly the sarcophagi depict unique carvings of Eros covered in lotus flowers and figures with lion’s heads, as well as the Greek gods of Medusa and Hercules. Sources have reported that these latest finds are filling experts with the hope that the area could be that of a necropolis — an ancient cemetery with several elaborate burial chambers. Previously treasure hunters had attempted to loot items from another tomb discovered nearby, leading them to damage its cover as they tried to pry it open. Police also found another sarcophagus from the Late Antiquity period while searching the property for a stolen truck in September, 2016.

Kunal - To have a new insight in early Harappan culture, further excavation will be carried out at Kunal, one of the earliest Harappan sites in Haryana, located in tehsil Ratia of district Fatehabad. The Archaeology and Museums minister, Ram Bilas Sharma said that the excavation at this site was first conducted by late JS Khatri and M Acharya under Haryana State Archaeology Department during the year 1985-86. The previous excavations have provided significant traits of early Harappan culture in our sub continent for the very first time in the history of Harappan studies. The minister said that the new project has been initiated to bring out the earliest material culture of the site, where the core area of the settlement is three-four acres but the site expands to nine acres. Sharma said that Kunal has a great contribution in the early Harappan studies in Indian sub continent and will definitely open new prospects in future researches on formation and antecedent stages of classical Harappans. The developed drainage system characterises this site. This excavation is aimed at bringing out the earliest material culture of the site and may push the history of the civilization back by over a thousand years, he added. Kunal is located on the bank of now dried up river course of ancient mighty river Saraswati. This early Harappan time (3500-2500 BC) that is Period-I is divided by Period-IA (3500-2850 BC), Period-IB (2850-2600 BC) and Period-IC (2600-2500 BC) which is followed by Mature Harappan Period 11 (2500-1900 BC). Hence the Kunal excavations will provide us with a large number of new insights of early Harappan culture, the minister said. 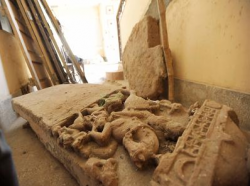 Devangarh - The Bihar archaeological directorate has found fragments of a few ancient sculptures from the ancient fort at Devangarh in Nawada district during excavation, which started last week. Senior officials in the state archaeological directorate said the Devangarh fort is perhaps the oldest in Bihar as the artefacts found there were from the Neolithic (from 3000 B.C. till 1500 B.C.) to the Gupta (4th-5th century AD) periods. "The excavation site is broadly divided into three components — fort, factory and temple area. We have started the excavation from the temple area and a couple of sculptures have been found," said archaeological directorate director Atul Kumar Verma. The excavation site is spread over an area of 80 acres. The evidences of fort were first reported around 15 years ago by the then curator at Nawada museum, Awadh Kishor. Apart from identification of walls, three big statues have also been found — two related to Buddhism and one with Hinduism. "Three ancient statues found earlier from the temple area are kept at the Patna Museum. The factory area is believed to be an arms manufacturing unit as large deposits of iron slags have been found there. After excavation in temple area, we will move on to the factory area and finally to the fort area," Verma said.