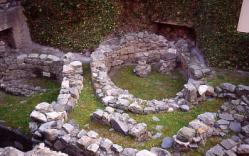 Lipari - Archaeologists on Friday found a Bronze Age hut during construction work in a town square on the southern Italian island of Lipari. Roman-era Hellenistic slabs were also unearthed, archaeologists said. Lipari, a strategic port throughout history and now a popular holiday resort, is the largest of the Aeolian Islands in the Tyrrhenian Sea off the north coast of Sicily. The Romans, who took the island from Carthage and used it as a base, retreat and place of exile, called it Lipara. The Greeks, who colonised it in 580 BC, called it Meligunis. Lipari is believed to have been inhabited since 5000 BC. In Neolithic times it was a source of obsidian, a hard black volcanic glass prized for its sharp cutting edge. 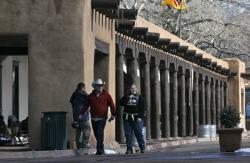 Santa Fe - Newly discovered documents show that the state's historic Palace of the Governors might have been built later than originally believed. New Mexico State Historian Rick Hendricks said documents show that the nation's oldest continuously occupied public building may have been constructed around 1618. That's nearly a decade after the 1610 date most thought the building was erected. The discovery started when Hendricks was compiling biographical sketches of the state's territorial governors. He stumbled on an Internet PDF of a document from the Spanish archives describing the experiences of Gov. Juan de Eulate, who arrived in New Mexico in 1618 and served until 1625. "One of the things he mentions is when he arrived in Santa Fe, there was no headquarters and that he constructed it," Hendricks said. "When he arrived, he said there was no casas reales — the term given to government headquarters — and that he built it at his own expense," Hendricks said. State historic archaeologist Cordelia Snow said the new date more closely meshes with the archaeology at the palace. "They're not going to have a fully grown building in 1610," she said. "I can't date the foundation. But the 1618-1620 period fits much better for the archaeology." "We have very big, strong foundations that are up to 3 feet in width," Snow said. "That takes a while. You're making adobe bricks, you let the adobe cure. You haul in vigas from the mountains. It's a long, gargantuan process. 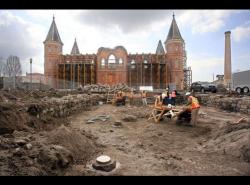 Provo - As The Church of Jesus Christ of Latter-day Saints finalizes plans to build a temple within the walls of the fire-ravaged Provo Tabernacle, history from an even earlier building at the site is being studied. Little by little, archaeologists and students from BYU are working in cooperation with the Church History and Temple departments of the LDS Church to unearth Provo's first Tabernacle — a building known as "the old meetinghouse." Through their efforts, the students have discovered some of Provo's early history and find some of it surprising. (It's) some of the best-cut stone you will see, put together in a solid foundation that held up this building," said Richard Talbot, director of BYU's Office of Public Archaeology. Not only are they learning about the old Tabernacle, which was torn down in 1919, they are also finding artifacts from life in Provo during the late 1800s. "We're finding little trinkets: beads and buttons and straight pins, a little doll; we found a little piece of a broad pin of off a woman's dress," Talbot said. An especially interesting architectural find: an original stone window frame, believed to have held stained glass, which was once above the front door of the old Tabernacle.

INDE – Hyderabad - The comprehensive dossier and management plan for the Qutub Shahi monuments in Hyderabad has been submitted to UNESCO through the Archaeological Survey of India for their recognition as World Heritage Sites. The State government had proposed the Golconda Fort, Charminar, Qutub Shahi tombs and Badushahi Ashoorkhana for Unesco’s world heritage list-2013. A three-member sub-committee, comprising Dr Amita Baig, Dr Sikha Jain and Dr Priyaleen Singh had inspected these sites last month. The panel, formed by ICOMOS (a Unesco offshoot) and the Union Ministry of Culture, had suggested that individual plans for the conservation of each historical structure be prepared along with fulfilling other criteria like removal of encroachments to get the coveted tag of a World Heritage Site.

Olympie - Police were still looking late Friday for two men suspected of stealing dozens of antiquities from a museum in Olympia, the birthplace of the Olympic Games, earlier in the day.  The thieves used the butts of their guns to break through display cases, making off with 65 artifacts. “Bronze and clay objects, and a gold ring” have been removed, according to police. The value of the looted objects, most dating from the 9th-4th century BC, was not known.

USA – Newport - The Rhode Island Marine Archaeology Project (RIMAP) is currently engaged in a multi-year search to locate and identify 13 British transport ships that sunk in Newport Harbor in 1778. The British navy scuttled the ships in an effort to blockade the French fleet that was threatening the city. During the Revolutionary War, the French fleet came into Newport, Frank said. “There were British ships that had been anchored around Newport Harbor. When the French fleet sailed in with bigger guns than the British had, they decided that the best plan would be to scuttle their vessels and try to create a blockade around Newport so that the French ships couldn’t sail in because they would get hung up on the sunken vessels. They took everything off of the ships and sunk them right before the Battle of Newport.”