Wadi al Jizzi - A joint team of experts from Leiden University of the Netherlands and Oman’s Ministry of Heritage and Culture is preparing to launch a landmark study of the archaeological heritage of the Wadi al Jizzi region of the Sultanate.The multi-year study, which will commence next month, is described as the first major archaeological dig targeting Wadi al Jizzi — an area dotted by prehistoric settlements and burial cairns, ancient copper mines, abandoned medieval irrigation and farming systems, and the ruins of villages and fortresses.The Wadi al Jizzi region is of great archaeological significance for a variety of reasons, according to a leading Dutch expert who has been selected to head the excavation. “Firstly, the natural passage through the Hajar al Gharbi mountains leading to the Buraimi Governorate has been an important transport route from times immemorial,” said Dr Bleda Düring, Associate Professor of Near Eastern archaeology at Leiden University. “Secondly, there are important copper deposits in the mountains directly behind Sohar, which were mined in the Early Bronze Age (3000-2000 BCE), the Iron Age (ca. 1200-600 BCE) and the early Islamic period. Finally, the region witnessed a marked population increase between about 900-1200 CE with large irrigation and farming systems in the flourishing hinterlands of Sohar,” the archaeologist added in remarks emailed to the Oman Daily Observer.

The head of UNESCO sounded an alarm about widespread illegal archaeological excavations across war-ravaged Syria on Friday, saying the U.N. cultural, education and science arm has warned auction houses, museums and collections about the problem."The biggest danger there, apart from the destruction we have seen of the world heritage sites ... is the illicit archaeological excavations," Irina Bokova, head of Paris-based UNESCO, told reporters.In February, Maamoun Abdulkarim, head of Syria's antiquities and museums, said illegal archaeological digs have threatened tombs in the desert town of Palmyra and the Bronze Age settlement of Ebla. Bokova said the problem has grown. She said UNESCO has raised the issue of illegal excavations with U.N. Syria peace mediator Lakhdar Brahimi and Arab League chief Nabil Elaraby. "We were showing (them) the map of these illicit sites, excavations," Bokova said. "This is our biggest concern nowadays, that we don't know what's happening there, this illicit trafficking (and) exports" of artifacts. 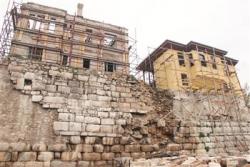 Hisarbaşı - The tomb of Karia King Hekatomnas and the Sacred Area, which is on the UNESCO World Heritage Temporary List and considered as one of the most important historical artwork discovered in the last century, is expected to be included in the permanent list soon.Kızıl said the area was discovered through a call reporting a robbery and then with the consultation of a group of scientists, the burial chamber was cleaned and the wall paintings were taken under protection.With a protocol signed with the Turkish Coal Enterprises, they were financially relieved, said Kızıl, and continued, “The grave of Hekatomnas and its surroundings was excavated. Very important archaeological findings and structures were discovered during the excavations. Among them, the most important is a villa from the late Roman period. Excavation in the burial chamber is jointly carried out by the Istanbul Restoration Conservation Center Laboratory and an Italian team. We have rare findings here.”

Coro - Archaeologists in Venezuela have unearthed a old mikveh dating back to the 18th century. The colonial-era Jewish ritual bath was discovered under the foundations of an art museum during renovation work. The mikveh was found in the city of Santa Ana de Coro on the country's Caribbean coast. Founded in 1527, Coro is one of the country’s oldest cities. Anthropologist Carlos Alberto Martin said that “excavations were started recently in a house which was built in 1772 and later purchased by a Jewish family named Senor.” Records from the period show that David Abraham Senor was a Jewish merchant of Spanish origins, who settled in Coro after arriving there from the island of Curacao. Some believe he was a descendant of the convert Abraham Senor, treasurer to the Catholic Queen Isabella of Spain who expelled all Jews from the country in 1492. Some members of his families were conversos or marranos, who secretly continued practising Judaism.“We checked with people in the Jewish community in Caracas," Martin said, “and from what we understand this is the only old mikveh of its kind to be discovered in South America.” He added that there were 3 constructed layers, with a 5-centimeter gap between them, making up a conduit system that brought in rain from the roof without help of people and without any seepage through the ground. The mikveh was dug into the ground of the building’s cellar, with narrow steps leading to it. Over the years it became covered soil. The staircase got blocked and the mikveh was eventually forgotten. 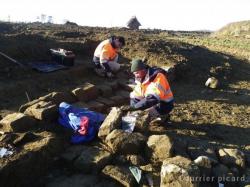