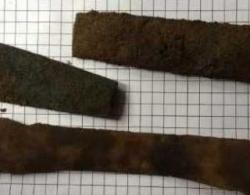 Coll - Archaeologists revealed that they have discovered 3,000 years old weapons belonging to Bronze Age. The discovery was made in the nature reserve on the Isle of Coll. The archaeologists found 12 pieces, which scientists believe could have been intentionally broken as part of a ceremony which could be some sort of offering to gods and goddesses of the ancient times. The broken pieces of the weapons that were collected from the site have been handed over to the Kilmartin Museum in Argyll for ongoing conservation and care. A number of times in past, bronze swords were excavated from Coll in 19th century. But the recently unearthed swords have no links and are the first of its kind. The investigation of the site was led by archaeologists at the Treasure Trove Unit, National Museums Scotland and RSPB Scotland. Trevor Cowie, researcher from National Museums Scotland’s department of Scottish history and archaeology, said in a statement that several objects from the Bronze period have been discovered in the west of Scotland in past, but still they have very less information about the exact places where they were found. “Archaeological techniques have developed dramatically since those 19th century discoveries were made, so we have a great opportunity here to resolve many unanswered questions about life on Coll some 3,000 years ago”, said Cowie.

Pheneos - New impressive findings have come to light in the archaeological excavations at the site of the Asklepieion in ancient Pheneos, in the Peloponnese, the Cultute ministry said on Wednesday. Among them are a pedestal on which originally stood two bronze statues which were later replaced by one made of stone, the form of the Ionic colonnade and the access to the sanctuary. Ancient Pheneos is a hill located in the Pheneos plateau of the same name on the mountainous region of the Corinth prefecture, at a height of 750 meters. The Asklepeion, which dates from the 2nd half of the 2nd century BC was unearthed in the late 1950’s and archaeologists found remnants of an ancient settlement and marble parts of statues which now reside in the local museum. In September 2015, the first phase of the excavations concluded under the direction of the eforate of ancient antiquities in Corinth and its director Konstantinos Kissas and Classic Archaeology Professor Dr. Torsten Mattern from the University of Trier in Germany. In this year’s excavations, archaeologists revealed that the colonnade was shaped like a “Π” with a space of 2.30 meters between the columns and confirmed the direction of the walls of the colonnade and the outdoor courtyard. They also revealed that the entrance to the sanctuary was achieved from the east via a ramp. A secondary entrance was located to the north, along the corresponding wall of the courtyard. 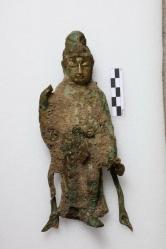 Yangyang - A Buddha statue, presumed to date back to the ninth century, has been found in Korea in what archeologists say may be an important new discovery to understanding ancient Buddhist art.  The gilt bronze statue, measuring over 50 centimeters in height, was discovered at a temple site in Yangyang, Gangwon Province, where a stone pagoda and other Buddhist relics had earlier been uncovered.  “According to experts who were called upon to check the new discovery at the excavation site this afternoon, the relic seems to be the largest of such kind from the Unified Silla period (668―935) and hold high value both artistically and historically,” an official at the Cultural Heritage Administration was quoted as saying by the Yonhap news agency.  Preserved in relatively good condition compared to other statues from the period, the statue will have to be examined by researchers in the coming months, but experts predicted it could become a national treasure.

Dunino -  Excavations for a motorway in southwestern Poland led to an unusual and unexpected discovery – the remains of a huge, almost perfectly preserved Bronze Age cemetery. Archaeologists thought they might find remains from the Battle of Kaczawa in 1813 during the Napoleonic Wars but not an ancient burial site. "It was a great surprise to all of us to discover a very rich, 3,000-year-old graveyard of people of the Lusatian culture," said archaeologist Izabela Kadlucka. Along with cremated remains that were placed in urns, the scientists found pots, weapons, ornaments, children's ceramic rattles and a small clay swan.
VIDEO = http://www.reuters.com/article/2015/10/15/us-poland-bronze-age-cemetery-idUSKCN0S82UR20151015 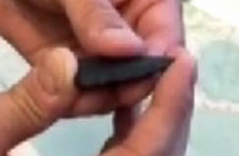 New Jersey - A New Jersey woman looking for sea glass on a New Jersey beach last week found an ancient Native American spear point believed to be about 10,000 or 11,000 years old. Audrey Stanick, of Lanoka Harbor, brought the relic she found in Seaside Heights to the New Jersey State Museum in Trenton to have it analyzed. There, Gregory Lattanzi, assistant curator for the museum's bureau of archaeology and ethnography, confirmed the age of her finding. Lattanzi explained that back in the Middle Paleoindian period, sea levels were much lower and that Native American villages close to the sea would have been 60 miles or so east of what is now the New Jersey coastline."Over time those would get reburied by sand and then the water levels would rise," Lattanzi said. In recent years, similar spear points have been found elsewhere along the shoreline.