Norfolk - The finds are among many historic artefacts dating back to the Bronze Age unearthed by a 12-strong team of archaeologists working at the site of the Highways Agency’s A11 dualling scheme near Thetford. Pottery, flint tools, coins, metal and animal bones dating back to 4,000BC have been discovered, while evidence has also been found of settlements that have stood at the site since 1,500BC, including a Roman farmstead. Mr Pankhurst said the lock dated back to the Roman era and was likely to have been hammered into shape from iron at a forge, while the Romans were fond of oysters, which they fished from the Norfolk and Suffolk coast. He believed the site, measuring one-and-a-half kilometres in length, was likely to have been home to six or seven homes, built using posts in the ground, during the Roman era and was chosen because the fertile land was ideal for growing crops. Etched in the ground is the outline of a clay building where kilns were used to dry corn to make bread and the black charring left by the furnaces is still evident in the clay soil. The bones of cows, sheep and horses butchered by the inhabitants can also be found all over the site between Chalk Hall Farm and the B1106 near the How Hill Tumulus. Evidence has also been found of cremations on the northern part of the site, while human remains were also found in a grave separated from the main farmstead, causing speculation among the archaeologists as to why that might have been the case. 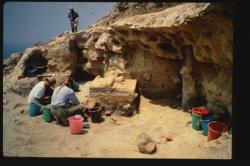 Mediterranean islands  - Neanderthals and Homo erectus had somehow ventured to the Mediterranean islands and settled Crete, the Ionian islands, Cyprus etc., thousands of years earlier than previously thought, according to new data coming to light. An article in the latest issues of Science refers to a real revolution that has taken place during the last 20 years as far as evidence for the first inhabitants on these islands is concerned. “On a lot of Mediterranean islands, you have these amazing remains from classical antiquity to study, so for many years people didn’t even look for older sites,” said archaeologist Alan Simmons (University of Nevada, Las Vegas), who has excavated at various sites, mainly on Cyprus. He mentions that, based on recent studies, one can conclude that humans had reached the Eastern Mediterranean islands long before the dawn of the Neolithic era. Until quite recently, researchers believed the Mediterranean islands were first inhabited about 9,000 years ago, by farmers and shepherds. However, the discovery and dating of tools, pottery, animal bones and other finds on the islands show that these were settled much earlier. For example, obsidian exported exclusively from the island of Melos and found in Frachthi Cave (Argolida) dates back to 11,000 years ago – which means the obsidian was transported from the island to the mainland. Palaeolithic tools found in geological layers that date 170,000 years ago, suggest that Crete might be inhabited as early as at that time! 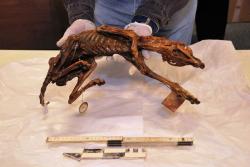 Cueva de la Candelaria -  A mummified dog, about a thousand years old, found in the Cueva de la Candelaria, in Coahuila – the only one that has been found in Mexico in this condition – will be subject to several studies, such as radiography and DNA tests after the National Institute of Anthropology and History (INAH – Conaculta) recovered it and restored it to the archaeological wealth it holds after having been in the hands of particulars. According to INAH specialists, this is one of the few specimens of mummified canines in the world; the other known cases are exclusive to Egypt and Peru. This specimen was reintegrated to the cultural national heritage along with 2,500 archaeological materials found in 1953. Regarding the context in which these materials were found, archaeologist Yuri Leopoldo de la Rosa Gutierrez of the INAH Center in Coahuila, indicated that Cueva de la Candelaria was used by groups of hunters-collectors as a placement site for their dead since inside the cave they found more than four thousand objects and around 200 human skeletons. The approximate date for such remains is relative to the Late pre Historic period (800 – 1200 AD), so preliminary they have considered the mummified dog to have been dead for about 1000 years. “The mummified dog will be the first element to be analyzed; radiographies will be made to identify lesions, pathologies and possible cause of death; other studies, such as DNA, cranium, bones and teeth measurements, and carbón-14 analysis will be performed to determine the species type and family, and precise date”, said archaeologist Isaac Aquino Toledo. Specialists preliminarily consider the animals mummification was due to natural causes and because of the humidity conditions and the weather within the cave; the hypothesis that the animal might have died of starvation also stands.

TURQUIE –  Milas - Officials in the southwestern province of Muğla’s Milas district are working to protect priceless wall drawings dating back millennia by erecting a shield to keep out the elements. The drawings, which are located in a 2,400-year-old tomb and are the most important cultural treasure in the vicinity, have been added to the UNESCO Temporary World Heritage List and were recently visited by an Italian team for analysis. Excavations on the tomb are continuing, Diker said. “We have also excavated many remains from the early Byzantium and Roman era.” Ultimately, the excavation area will be opened to tourists as an open-air museum called the Uzunyuva Tomb Archaeopark and Center.  “The excavation works are still continuing at the tomb room, which belonged to Carian King Hecatomnos during Persian control of the area.’’ The academic said the tomb itself was protected with a climate system that included a humidity and heating system, as well as temperature control. “The humidity may increase or decrease. If it decreases and this place starts to dry out, the walls would be damaged. Marble dust may stick to the walls, affecting the visibility of the drawings.”

Saskatchewan – Saskatoon archeologists have discovered the likely remains of the SS City of Medicine Hat deep beneath the shore of the South Saskatchewan River more than a century after it struck the newly built Traffic Bridge and capsized. More than 1,000 artifacts from the historic wreckage, announced by the City of Saskatoon Thursday morning, were brought up in August by a crew drilling eight metres below the ground during load testing of the Traffic Bridge, which is being demolished and replaced with a new structure. Amundson said Thursday that all evidence suggests the artifacts from the find, including a boot from the early 1900s, tableware and clothing, were from the steamship crash. The items were pulled up eight metres below the surface around the southernmost Traffic Bridge pier, which was covered with five metres of fill around 1960 during the building of Rotary Park. Much of the wreck remains buried there in a sandy layer of river bottom eight metres below the surface. 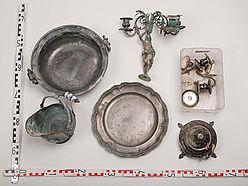 Alland - A treasure hunter thought he had discovered a valuable archaeological site when his metal detector uncovered antique tableware believed to be several hundred years old including candlesticks and fruit bowls hidden in a wood at Alland in Lower Austria. But archaeologists quickly realised that all was not as it seemed when they found that the treasure was wrapped in a newspaper from 1979. Police were called and believe that the buried treasure was probably stolen property that had been hidden by a thief who for unknown reasons was either unable to recover it or had forgotten where it was buried. They have now released images of the find said to be worth several thousand euros to see if the original owner can be traced. There was no DNA or fingerprint evidence on any of the items. A police spokesman said: "It is a mystery, but first the archaeologists thought it might be an ancient burial site but the newspaper quickly proved that was not the case. But we have no records of where these items might have come from and we are hoping the original owner might be able to provide a further clue."