- USA – Klamath Falls -  University of Oregon Museum of Natural and Cultural History archeologists  used metal detectors and radar to find where the barracks stood at the Fort Klamath military post, established by the U.S. Army in 1863 to protect settlers as they settled in Klamath, Modoc and Yahooskin Indian territory. The fort was decommissioned 17 years after the Modoc War, a result of the U.S. government forcing three different American Indian tribes to live together on one reservation. A Modoc Indian the Army called Captain Jack led his tribe off the reservation and the Fort Klamath cavalry was ordered to bring them back. After a year of battle, Captain Jack was captured and hanged; his grave is at the Fort Klamath Museum. Archeologists went over three sites, but found substantial evidence only at the barracks site.

- ROYAUME-UNI –Lakenheath - Archaeologists working on a military base have unearthed what they believe could be a 2,000-year-old Roman shrine. The shrine was discovered during a dig at RAF Lakenheath, with senior Suffolk County Council archaeologists calling the find ‘extremely unusual’. The site of which measures around 15m square, contained a series of small circular Roman buildings dating from the second century AD to the fourth century AD. The importance of the find was as part of a growing body of discoveries in the Lakenheath area. An Aucissa brooch dating from the first century AD was found at the site, as well gritstone that appears to have been transported from Derbyshire for construction of the building. The Aucissa brooch is named as such as the name is often found inscribed on the head of the brooch and is assumed to be a maker’s name. The Aucissa workshop made brooches in Gaul from 40-60 AD. The dig is now closed, leaving the team to carry out analysis on their find, including carbon dating on the uncovered artefacts. 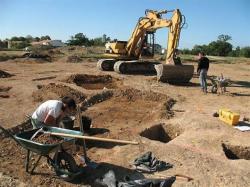 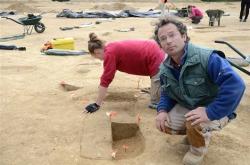 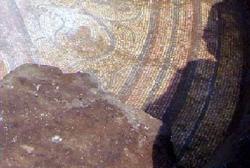 Deir Sounbol -  Excavation Department at Idleb Antiquities Directorate unearthed a mosaic painting dating back to the Byzantine Era at Deir Sounbol Church in al-Zawieh Mountain. Head of the Excavation and Studies Department, Anas Haj Zaiydan said that just a part of the mosaic painting was found at the eastern side of the church, adding that the painting is 5-meter long and 4-meter wide. He indicated that the eastern part of the painting is burnt, adding that the part which is located to the west of the marble-made basis is also damaged as well as the northern and southern corners of the painting. The painting is embroidered with geometric and floral shapes, in addition to some written inscriptions. For his part, Chairman of Idleb Antiquities Directorate, Nicolas Dabbas, said that two separated Greek texts are written on the painting, the first of which consists of five lines while the second consists of three lines. The two texts contain prayers and religious supplications, in addition to the name of the church's owner, and of the person who supervised the painting. (SANA-By Ruaa al-Jazaeri) 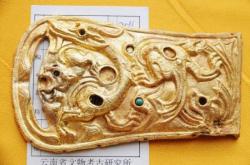 Heizhiguo - Photo taken on May 9, 2011, shows a gold buckle with dragon and tiger designs unearthed in an ancient noble tomb in Guangnan County, southwest China's Yunnan Province. The Yunnan provincial archaeological institute and the Guangnan government on Monday jointly announced that the tombs discovered in Heizhiguo Township of Guangnan County are royal tombs of the ancient Gouding kingdom under the rule of the Han Dynasty (202 BC-220 AD).(Xinhua/Ji Zhepeng) .

- CHINE –Suizhong -  Chinese archaeologists said they had identified some brick relics, which wind their way through 20 kilometers in northeast China's Liaoning Province, to be part of China's ancient Great Wall. The relics, which were mostly bricks and stones left on the site of the walls, were found in the mountainous areas of Suizhong County, said a recent report jointly released by Liaoning Culture Relics Bureau and Liaoning Bureau of Surveying and Mapping. The report said the walls were rebuilt in the Ming Dynasty (1368 - 1644), though large parts had disappeared or had largely corroded after years of neglect. As generations of local farmers did not know the bricks and stones were Great Wall relics, they sometimes used them to build their houses, said local authorities, adding that no appropriate measures had ever been put in place to protect the walls. The Great Wall was originally built in the Warring States Period (475 B.C.-206 B.C.) to defend China against northern nomadic tribes. But most of the standing walls were rebuilt in later dynasties, including Ming. 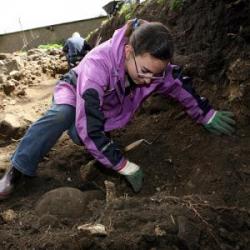 Weardale - The ruins of a forgotten castle that once provided the gateway to the Bishop of Durham's park have been uncovered by a team of archaeologists. Fifty volunteers from the North Pennines AONB Partnership's Altogether Archaeology project discovered the remains of Westgate Castle, in Weardale, County Durham, which was used as offices for the Bishop's extensive estate from the 13th Century through to the early 17th Century.  Several decades later, the disused castle had fallen into a state of disrepair and its masonry was quarried for new buildings.  None of its masonry remains above the ground but a recent geophysical survey indicated that substantial walls are buried below the surface.

- INDE – Kumariya -  A mound at Kumariya village in Bhilwara district has a lot to offer to those who interested in excavating ancient objects. A Bundi-based amateur archaeologist Om Prakash Sharma has written to the archaeology department of Rajasthan to dig deep in the mound after he found various items of Copper Age on the surface of the mound.  Sharma found many items like copper rod and arrow-head-like figures of copper on the surface of the mound. He was looking to find ancient items in the area where Pune's Deccan College left a dump of excavations on the bank of River Banas. But, Sharma found many ancient objects from the site where the Deccan College dump the broken pieces and powder of skeletons. The items are believed to be around 4000 years old. Sharma said that if there are such items that are found at the surface of the mound, there would be a lot of things which would be hidden in the mound.  He claimed the objects found at the mound belong to the Maurayan period. "I also found some shells and pieces of shell bangles. Also, there were red and black utensils. The mound contains treasure which I have never seen earlier," said Sharma, who found many ancient objects in various parts of Rajasthan.