Saqqara - Archaeologists in Egypt made a surprising discovery dating back more 2,500 years near the country's famed pyramids south of Cairo. Their findings, which include a mummification workshop and a shaft, used as a communal burial place, are located at the vast Saqqara necropolis. The latest find, announced at a press conference Saturday, belongs to the Saite-Persian Period, from 664-404 B.C. The site, which lies south of Unas pyramid, was last excavated more than 100 years ago, in 1900. Among the artifacts found were a gilded silver mummy mask, fragments of mummy cartonnages, canopic cylindrical jars and marl clay and faience cups.  Down the 30-meter-deep shaft lie several mummies, wooden coffins and sarcophagi. The shaft is comprised of burial chambers carved into the bedrock lining the sides of two hallways. In mummification workshop, an embalmer's cachette was found that archaeologists believe will reveal more about the oils used in the mummification process in the 26th Dynasty. "We are in front of a goldmine of information about the chemical composition of these oils," Archaeologist Ramadan Hussein said at the press conference, reports the Associated Press.

Gobeklitepe - Archeologists have discovered new temples and standing stones in Gobeklitepe, an archeological site located in Turkey's southeastern Sanliurfa province. In an interview with Anadolu Agency, Mehmet Onal, the head of the Archeology Department at Harran University in Sanliurfa, said at least 15 more mega monumental temples and more than 200 standing stones were discovered as part of geophysical surveys in the region. The German Archaeological Institute and Sanliurfa Museum have done joint work at the site since 1995 and have found T-shaped obelisks from the Neolithic era measuring 3-6 meters (10-20 feet) high, and weighing 40-60 tons. During the excavations, diverse historical artifacts like 65-centimeter-long (26-inch) human statues dating back 12,000 years were also discovered.

Zagros - The joint cooperation of Iranian and Austrian archeologists in the cultural field of the central Zagros has led to the discovery of ancient findings dating back to the Neolithic era, Bronze Age, Iron Age and the Sassanid period. The archeologist noted that the survey of the ancient sites of the cultural areas, while focusing on the geographic, geological and settlement patterns of the pre-historic and historic enclosures was associated with the identification and documentation of the works such as the hills, the sites and the historical-cultural works. Citing the interesting points of the survey, she referred to the aerial photography of the hills and ancient sites and preparation of the map of the “curve rate” of the hills, adding that in this season different pottery discovered in the current survey were categorized in a completely systematic manner and finally the chronology of the Seymareh and Sirvan cultural areas is under study. 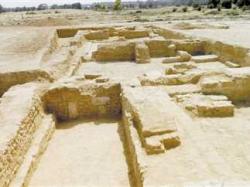 Meit Aboul Koam - The Egyptian archaeological expedition at the Meit Aboul Koam site in Monufiya have uncovered a number of rooms dating back to the Roman and Byzantine eras. One of the discovered chambers features the Roman architectural style, as the walls consist of large stone blocks with precise angles indicating this dates back to the Roman era. Marble columns with a smooth Roman-style hull and a large number of coins were also found in the chambers. Other rooms contained Byzantine walls with uneven stone blocks of unequal sizes. Spaces that filled the mortar used in Byzantine architectural buildings made it weaker than the Roman mortar, as such the walls of Byzantine chambers were found disjointed. The mission also discovered a room with a floor containing tiles of various sizes. Inside they found a capital of a column flower decoration, containing six petals used in the style of Greek/Hellenistic buildings and used by Egypt’s Copts at that time to symbolize the six-arm cross, which also appeared on the bottom of a dish discovered in the room. Head of the Central Department of Lower Egypt Antiquities Nadia Khedr said that a number of little archaeological artifacts that represent pure Christian motifs, such as the symbol of the cross and palm branches constructed in a Roman style, have been also discovered. Dishes, pans, and two large water jars in a good state of conservation have been found, beside a large number of non-decorative broken parts of utensils, Khedr mentioned. 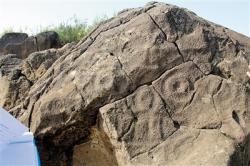 Ongniud Banner - The 65-cm-tall, 57-cm-wide painting was found on a section of sandstone in Ongniud Banner, Chifeng, said Wu Jiacai, a rock painting scholar from Inner Mongolia Normal University. The figure has a pair of double-circle eyes with a diameter of 18 cm and an elliptical mouth. Four vertical bars appear in the mouth, indicating teeth. Wu's team invited rock painting experts from the Russian Academy of Sciences to make comparisons with rock paintings discovered in Far East Russia and other parts of Inner Mongolia. "Compared with other paintings, this one is larger in size, more delicately painted and has more smooth lines," said Wu. Human face rock paintings have been found in many areas of Inner Mongolia and have provided information for the study of human migration and customs, according to Wu.

Lantian -  Ancient tools discovered in Lantian County, northwest China's Shaanxi Province by a research team consisting of Chinese and British archaeologists suggest that there may have been a hominin presence outside Africa earlier than previously thought, according to a study published Wednesday in Nature. In eleven different layers of fossil soils, 80 stone artefacts were found, among which the oldest can be dated to 2.12 million years ago, which are 270,000 years older than the 1.85-million-year-old skeletal remains and stone tools from Dmanisi, Georgia, which were previously the earliest evidence of humanity outside Africa.

- Qatar Museums (QM) has announced the discovery of a formerly unknown petroglyph site in the centre of the Qatari Peninsula.  The newly discovered site is spread across an area of around 15 hectares, making it the second largest rock carving site in the country after Al Jassasiya. This is the first time that a site of this kind is discovered away from Qatar’s coasts, thereby completely transforming the current archaeological map of the country, QM has said in a statement. The new site contains petroglyphs that are commonly known as ‘rosette’ and consist of a central cupmark circularly surrounded by several other cupmarks. In the Gulf region, this type of rock carving is unique to Qatar and is believed to have been used for a children’s game.