Mizil - Workers building a new highway in Romania have unearthed the treasure-laden tomb of a wealthy warrior and his horse. The tomb dates to the fifth century A.D., when the region was controlled by a people known as the Huns. The tomb is filled with more than 100 artifacts, including weapons, gold-covered objects and pieces of gold jewelry inlaid with gemstones. Ene is the lead archaeologist investigating the tomb, which was discovered late last year during the construction of a motorway near the town of Mizil in the southeast of Romania, about 140 miles (220 kilometers) from the Black Sea. Four separate archaeological sites were unearthed during the road construction, and the wealthy warrior's tomb — which the researchers described as "princely" — was just a part of the most complex site, Ene said."This tomb is of major importance because, in addition to the rich inventory, it was discovered at a site along with 900 other archaeological features — [such as] pits, dwellings, and tombs," he told. The ethnicity of the Mizil warrior still isn't known, but the rich grave goods suggest that he belonged to the ruling class in the region's Hunnic period, or "migration era," when it was controlled by the Hun. The latest archaeological finds at the Mizil tomb included an iron sword in a gilded  scabbard, a dagger, bundles of iron arrowheads and decorated braces of bone that were once fitted to a wooden bow, Ene said. The dagger is especially ornate, with a gold-covered hilt inlaid with gemstones, he noted. Archaeologists also unearthed the remains of a gilded saddle, a bronze cauldron, several decorated "sconces" — fittings to hold candles on a wall — and pieces of gold jewelry, he said. The tomb held the warrior's complete skeleton, and his face seems to have been covered with a gold mask, the remains of which were also unearthed. However, only a leg and the head of his horse have been unearthed so far, Ene said. 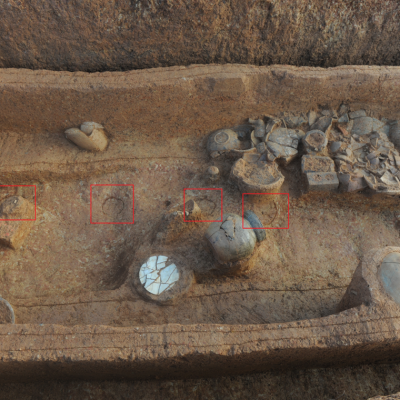 Changsha - Archaeologists excavating an archaeological site in Changsha unearthed 21 vertical pit tombs containing over 200 artifacts. Many of the tombs were found side-by-side, aerial photos of the site show. On one end of the site, three tombs are in a row. On the other end, four tombs are lined up together. Pairs of tombs may have been the joint burial of a husband and wife. All of the tombs are about the same age, dating back 2,000 years to the Western Han Dynasty. The Western Han Dynasty was the earlier half of the Han dynasty and lasted from about 200 B.C. to 25 A.D. Because of the particular arrangement and similar age of the burials, archaeologists concluded the collection of tombs is likely a family buried together in an ancient mausoleum. The tombs were found on a mountainside near a royal tomb, the Taohualing Han Tomb and burial area. Considering this proximity, the 21 tombs may be the royal family, archaeologists said..One of the rare tombs unearthed in Changsha had relatively complete traces of an outer coffin shaped like “Ⅱ” or like double ‘I’s, the release said. A line of five decaying pillars was also found in the tomb, photos show. These ruins indicate the tomb might be a double layer structure, a tomb structure rarely found in the Hunan province. The collection of tombs can be grouped into two types: tombs with passageways and tombs without, archaeologists said. The tombs mainly contained pottery artifacts, researchers said. However, also unearthed were: two iron relics, walls covered in glaze and a mineral known as talc and a tan-colored talc disk with a rhombus and circle pattern. Photos show the talc disk. In addition, archaeologists found coins, pottery stoves, pots and utensils at the site
https://www.tri-cityherald.com/news/nation-world/world/article271126207.html Thessalonike - The finds unearthed during the construction of local metro facilities in Thessaloniki, a Greek port city on the Thermaic Gulf of the Aegean Sea and also Greece’s 2nd largest city, are quite impressive. A pre-Cassandrian small town from the 4th century BC was discovered in Pylaia in 2012 during excavations at the “Amaksostasio” of the main line of the Metro. A 31-acre area was investigated, and part of the city was laid out according to the Hippodamian (grid plan) urban planning system and adhered to the standards of the great cities of Macedonia, Olynthos, and Pella—was revealed. The numerous find suggests a thriving community with a robust economy and established sociopolitical structures. The second half of the fourth century is thought to have seen its greatest development. However, it was cut short when Kassandros founded the city of Thessaloniki, which was later abandoned, in 315 BC. The statue of Aphrodite, found in 2018, was discovered at the site of the Hagia Sophia station (named after the Hagia Sophia of Thessaloniki, one of the oldest churches in the city). The sculpture was identified near the very area which revealed an entire fountain complex. Other than this sculpture, the archaeologists excavating the area (near the southern entrance of the Hagia Sophia station) were pleasantly surprised by the well-preserved state of the 4th-century mosaics. Showcasing their geometric patterns, these multicolored mosaics were possibly a part of a public building complex or at the very least bedecked the floors of an urban villa. The Roman cemetery (2nd–4th century AD) that was discovered within the boundaries of Fleming Station and revealed to us details of a previously unidentified settlement on the outskirts of ancient Thessaloniki is another intriguing discovery. An extensive portion of the city’s eastern cemetery was discovered. Additionally, a three-kilometer cemetery basilica with mosaic floors was discovered on the site of an earlier structure. In particular, it made thousands of funerary monuments (3000) visible, which has improved our understanding of how the area was organized and continuously used from the Hellenistic era to Late Antiquity. The tombs belong to various types, pit-shaped, box-shaped, pot burials, altars, altar-shaped constructions, single or double vaulted, decorated with clay and glass vessels, clay figurines, gold and silver jewelry, and coins. More than twenty archaeological excavations were conducted in stations and ventilation shafts in total. The archaeological layers ranged in depth from 0.5 to 7.0 meters, but some hydraulic structures, wells, conduits, reservoirs, and aqueducts were discovered at much deeper levels. Under the scientific oversight of the capable services of the Ministry of Home Affairs, the antiquities were meticulously documented and recorded using contemporary technical techniques. The 2,500 square meter excavation research at the Acropolis station demonstrated that the area was occupied from the end of the third millennium BC until the Byzantine era. More than 300,000 artifacts, many dating back to the 4th century BC, have been excavated from 6 of the 12 station sites currently under construction.

Istanbul - Roman-Era Sarcopghagus has been unearthed in Istanbul, Turkey. Everything happened during the excavation works of an apartment demolished. The conclusion: there were also bones belonging to the human body, besides the sarcophagus.

JORDANIE -  Beit Ras -  Home to the remains of the ancient city of Capitolias, excavations in the modern-day town of Beit Ras in northwestern Jordan have offered clues on the use and production of glass during the Roman, Byzantine and Umayyad periods, according to a Polish scholar. Capitolias was one of the Decapolis, a league of 10 ancient Greek cities in the south-eastern Levant. “Excavations in one of a few places still accessible for fieldwork were conducted by a team from the Polish Centre of Mediterranean Archaeology University of Warsaw, under the direction of Professor Jolanta Młynarczyk,” noted Mariusz Burdajewicz from Institute of Archaeology, University of Warsaw. Apart from various architectural structures, pottery and other small finds, the excavations in Beit Ras, some 10km north of modern Irbid, brought to light several hundred glass fragments, Burdajewicz said, adding that from this group, 161 objects were registered during excavations in 2015 and 2016.  The archaeological finds date back to the late Roman and, for the most part, the Byzantine and Umayyad periods (late 4th through the mid-8th century), the professor said. Burdajewicz noted that a few fragments may be dated tentatively to the second half of the 8th century (early Abbasid period).  “As for the repertoire of glass types, it is relatively limited and includes mainly table vessels, like bottles, drinking vessels [cups/beakers/goblets] and bowls,” Burdajewicz said, noting that objects were industrially produced in the area. Throughout the Byzantine and Umayyad periods, the northern part of Beit Ras was destined specifically for crafts like wine-pressing and kitchen activities. Possibly, glass and pottery production was present in the near vicinity.  “The chronological context of the associated pottery types narrows the dating to the 5th/6th-8th centuries,” Burdajewicz maintained, adding that oil lamps were also found alongside numerous raw-glass chunks.  The finds represent well-known types of glass vessels, with parallels coming from a large area of the Roman-period Decapolis and the provinces of Palaestina Prima, Secunda and Tertia, which were successively replaced by the Byzantine Diocese of the East, and the territory of Bilad El Sham, after the Muslim conquests in the first half of the 7th century, the archaeologist said. Most of the glass finds from the Polish excavations at Beit Ras represent common forms comparable to other assemblages from contemporary sites of the Decapolis and the Eastern Mediterranean in general, he noted, adding that the finds from Beit Ras were used in everyday life for storing, serving and consuming food and drink.