Hamilton - Contracting archaeologist Andrew Hoffman could hardly conceal his glee at one of the most significant archaeological finds in the Waikato. He and a group of Auckland archaeologists uncovered about 1000 historic features on the site of the former Hamilton Club building after it was moved to make way for new foundations. Among the discoveries are pre-European food storage pits and a lump of obsidian the size of a cricket ball. The volcanic glass, possibly from Mayor Island, was used by early Maori to fashion cutting tools. Remains of 18 bell-shaped pits, probably used to store kumara for food and as seed, were also uncovered. Mr Hoffman said the "bell-rua" pits had been dug straight down into the sandy soil and hollowed out into a chamber. The marks made by digging instruments could still be seen. The area also contained typical gardening soils and the remains of kumara-growing mounds. "It is a complex and significant site as the pits have never been found in such numbers before. There has been very little work done in the Hamilton region and the pits are an unexpected discovery," he said. To find the pre-European layers the researchers had to delve 1 to 1.5 metres below the surface. Shallower layers held treasures from early European settlement. The area, near the bottom of Grantham St, was the site of early commerce including a general store, biscuit maker, watchmaker and dressmaker along with dwellings. A red-bricked well from the period was also discovered and dug out to see if it held any significant items. Many of the items found date from the 1860s-1880s. NZ Historic Places Trust spokeswoman Gail Henry said they might tell us a lot about Hamilton's early days. "The features and material uncovered – including bottles, crockery and other artefacts – are important as very few excavations have been undertaken in the Hamilton area. The information recovered will help inform us about both pre-European Maori and early European periods of time." 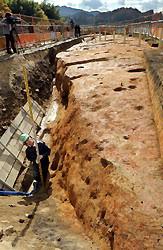 Kashihara - The Kashihara Municipal Board of Education announced Dec. 15 that the late 6th-century remains of what is likely an embankment of the ancient "Iware Pond" have been found in Kashihara, Nara Prefecture. The Iware Pond is mentioned in the history book "Nihon Shoki" (Chronicles of Japan), and the Nara-period poetry anthology "Manyoshu" (Collection of Myriad Leaves). The location of the pond had previously been unknown. The remains of a large structure were also found on the embankment site, which some researchers believe to have been a facility for Emperor Yomei (died 587), the father of Prince Shotoku (574-622). The facility, called "Iware no ikenobe no namitsuki no miya," is described in the Chronicles of Japan as having stood by the pond. The embankment was apparently part of an artificial pond built by damming up a river, and is the oldest known pond of its kind in Japan, according to city officials. Researchers found a ridge spanning some 300 meters from east to west and 20 to 55 meters wide at the site. An 81-meter-long stretch of the ridge's eastern edge was found to have built up from a lower level. Researchers believe that the entire ridge served as a 3- to 4-meter-high embankment to dam the river. The pond's area is estimated to have been some 87,500 square meters. It is believed that the embankment, as well as the nearby building and earthenware excavated around the area, were all built and manufactured in the 6th century, making the Iware Pond older than the Sayama Pond in Osakasayama, Osaka Prefecture, which dates back to the early 7th century. The Sayama Pond was previously believed to be the oldest known pond of its kind. At the western edge of the embankment site stands a monument, on which an ancient poem is inscribed, reading, "This is my last chance to see the ducks singing in the Iware Pond as I am destined to die today." The poem is said to have been written in tears by Otsu-no-miko, the son of Emperor Tenmu, on the embankment before the former was executed for treason in 686.

Al-Rajajil - On a lonely exposed hillside a few kilometers outside the capital of Al-Jouf province, Sakkaka, stand clusters of three-meter high fingers of stone. Etched with ancient Thamudic graffiti, these monuments to a long extinct culture have maintained their lonely vigil for six millennia. Many have fallen over and others lean at bizarre random angles. Al-Rajajil (“the men”), the sandstone stele weighing up to five tons each, is popularly called Saudi Arabia’s Stonehenge. They are possibly the oldest human monuments on the peninsula. Some time in the Chalcolithic, or Copper Age, people living in the area where Al-Jouf is today laboriously erected 54 groups of rudely trimmed stone pillars. Each group contains two to 19 pillars. At ground level there is no immediately obvious placement of the groups. However, aerial images suggest a rough alignment to sunrise and sunset. There is no positive answer to the question why they are there. An archaeological dig over 30 years ago at the base of one set of pillars failed to turn up any bones or votive offerings, suggesting that religious motives were not the reason. Political or astronomical reasons are a possibility, though not proven. It is possible that is a landmark for a trade route. Al-Jouf was a significant stopover point on the trade route from Yemen to Mesopotamia. One trade route, the oldest land route in recorded history, ran from Yemen and parallel to the Red Sea coast through Madinah, Al-‘Ula and Madaen Salih.  It turned northeast to Al-Jouf and then north toward Damascus and Turkey. The Arabian Peninsula and Saudi Arabia in particular has hugely rich archaeological wealth. Much can be definitively written into history, but the standing stele of Al-Rajajil remains an enigma. 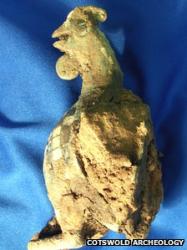 Cirencester - A Roman cockerel figurine thought to have been made to accompany a child's grave has been unearthed in Gloucestershire. The 1,800-year-old enamelled object was found during an archaeological dig at one of Britain's earliest-known burial sites in Cirencester. It is thought the bronze cockerel, which is 12.5cm high, could have been a message to the gods. The elaborately-decorated cockerel is believed to be Roman, probably dating back to the 2nd Century AD. According to experts, religious significance was given to the cockerel by the Romans and the artistic subject is known to be connected with Mercury, the messenger to the gods. They said it was Mercury who was also responsible for conducting newly-deceased souls to the afterlife. Mr Holbrook, chief executive at Cotswold Archaeology, said the cockerel had been excavated from the grave of a young child and had been placed close to his or her head. "Interestingly a very similar item was found in Cologne in Germany and it looks like they both could have come from the same workshop based in Britain," he added. Other finds from this grave include a small pottery tettine or feeding bottle, which was unfortunately highly fragmented. This will also undergo conservation work. Excavations have been taking place at the former Bridges Garage on Tetbury Road in the town. Earlier, experts said the unearthed burial site was the largest archaeological find in Cirencester since the 1970s. 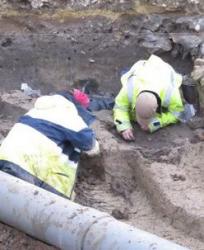 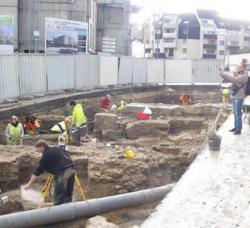