Babu Dehri - he Directorate of Archeology and Museums (DOAM) in an unprecedented excavation has discovered a record number of antiquities of 400 Buddhist monuments of different categories from a single site in village Babu Dehri of Swabi District. Besides, the discovery of a large number of artefacts from a single location, comprising around 400 monuments a large stupa was also unearthed from the site which was a big feat and considered the largest discovery of the province.

CHINE - Houzhai -  Three tombs dating back to the Tang Dynasty (618-907) were recently found in north China's Shanxi Province, according to the provincial institute of archaeology. Archaeologists said that the tombs are about 2 km west of Houzhai Village, Shuozhou City, and are located in the key area where the farming and nomadic cultures blended in ancient times. Based on the shapes, features and styles of the tombs, archaeologists speculated that two of the three tomb owners were husband and wife. Unearthed relics include potteries, lacquerware, ironware, stone tools, copper coins, silver ornaments, bone combs, and tower-shaped pots. Considering the time, scale, geographical environment and the number of funeral items in the tombs, it can be inferred that the owners of the three tombs were ordinary people.

Khalkedon - A brick tomb dating back to the Hellenistic era has been unearthed during the ongoing archaeological excavation at the iconic Haydarpasa Train Station in Istanbul’s Kadikoy district. What makes the find particularly interesting, according to Rahmi Asal, director of the Istanbul Archaeological Museum, is that the tomb was used for cremation. “This is a very significant discovery. It is the only thing from the Hellenistic period found here, apart from the Hellenistic platform previously dug up,” Asal said. “This is very valuable. It is one of the oldest finds in this area,” he added. According to the preliminary analysis, the body was cremated inside the tomb, but the skeleton and other remains survived the blaze and have now been unearthed, Asal explained. A terracotta goblet and a perfume bottle, both of them with visible marks of fire damage, were found with the skeletal remains, he added. Archeological excavations around the historical Haydarpasa Train Station, located on the Asian side of Istanbul, have unearthed a wealth of historical ruins, all hinting at the rich past of the ancient city of Khalkedon (Kadikoy), also known as the “Land of the Blind.”

Kvinesdal - Burying the dead in boats was a practice found in several coastal settlements during the Viking Age. Recent advances in georadar technology have resulted in more of these rare boat graves being discovered in various parts of Norway. Now, archaeologists have discovered a previously unknown boat grave in Kvinesdal, southern Norway. The discovery was made on a plain at Øyesletta, already known to be one of the largest burial grounds in the south of Norway. However, it is the first boat grave to be discovered in the area. Such finds are rare, and would have been reserved for significant people in society. Several burial mounds were discovered close to the boat grave. 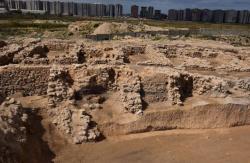 Tabba Matouh - Archaeologists have uncovered an amphora workshop at Tabba Matouh in west Alexandria, Egypt. The site manufactured amphorae and pottery during the Graeco-Roman period and also served as a storage warehouse. Amphorae have a pointed bottom and were used for the transportation of various products, both liquid and dry, but mostly for wine by land or sea trade routes. The workshop consists of a group of kilns which were operated throughout different periods in history. Whilst amphorae production was mainly during the Roman period, the workshop was later used for the production of lime possibly in the Byzantine period. Evidence also shows activity during the Middle Ages where the site was repurposed as a cemetery. To the south of the ovens is a structure that served as a warehouse for the amphorae, also containing large cooking pots and tableware, whilst a group of limestone buildings consisting of thirty rooms were used as temporary accommodation for the workers and food preparation. Within the group of buildings, the researchers found firewood, amphorae, small statues and animal bones, in addition to Ptolemaic coins bearing the faces of Alexander the Great and Queen Cleopatra.

Diquís - Archaeologists have excavated giant stone spheres in the Diquís Delta of Costa Rica. Stone spheres are found on the small island of Isla del Caño and the Diquís Delta, where over 300 stone Petrospheres have been previously identified from the Diquís culture. The Diquís culture emerged in the Valley of the Rio Grande de Térraba, where they established complex social, economic, and political systems to govern their society. During the Chiriquí Period between AD 800 – 1500, many settlements grew into large communities around the alluvial lands of the Térraba River and its main tributaries, constructing large structures using round-edged boulders, paved areas, burial sites, and circular or rectangular mounds with stone walls. The Diquís reached an apex of cultural development during this period, with Diquís artisans creating elaborate ceramic, bone, and gold objects, and sculpturing stone spheres in important zones within the settlements. Stone spheres were also placed in alignments in public plazas, or along the approach to the dwellings of the ruling elite or chieftains. Palanque - Archaeologists have uncovered hundreds of animal remains placed as ritual deposits from ancient feasts in the Maya city of Palanque.The discovery was made by researchers (INAH), where the team found animal remains, coal, small beads made from shells and a green stone ritually deposited in the El Palacio (meaning palace). El Palacio is the largest complex within the ruins of Palanque, likely serving as the ceremonial and administrative centre during the 7th and 8th century AD. The context of the deposits correspond with having banquets, after which both the food and the used objects were placed in cavities and burnt. Activity such as this was done to ceremoniously start the construction of major building projects or for ritual events. The remains from the deposits were identified by sieving, a process of sifting with water and floating material in which the researchers constructed two wooden supports with a narrow 1/8 inch mesh on the adjacent Otulúm stream. A deposit was excavated in House B in the southwest corner of El Palacio. Sieving identified 17 species, 58% of which corresponds to fish, 19% to molluscs, 11% to decapods (crustaceans), 5% to birds, 4% to reptiles and 3% to mammals. They are recognised by their common name: the water mussel, the land snail, the apple snail, the freshwater crab, mojarras, tenguayaca, white bass, quail, white turtle, nine-banded armadillo, domestic dog, cervid and tailed deer. Another deposit located in House E contained 70% of identified species, consisting of 12% to fish and 10% to molluscs, whilst the lowest percentages are reptiles, mammals and birds. The deposits indicate that the inhabitants of Palenque mainly exploited the resources of the nearby freshwater bodies such as streams, swamps, lagoons and rivers, such as the Michol Stream and the Catazajá Lagoon, or the Usumacinta River, the latter in Jonuta, Tabasco.

Székesfehérvár - The remains of two members of the Árpád Dynasty have been identified from samples taken in the ossuary of Székesfehérvár . Thus far, in the search to reveal the lost remains of the first Hungarian dynasty of kings, The Hungarian Research Institute has found the thread of the Hunyadi family’s origins through the remains of János Corvin, as well as patrilineal descendants of Béla III. Along with the identification of remains, the Research Institute will be able to accurately reconstruct the faces of past kings. Horváth-Lugossy explained that the Oncology Institute’s identification of the Árpád genetic line through Béla III. allowed for the analysis of remains in Székesfehérvár and the bones of András I. in Tihany.