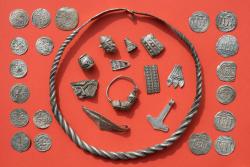 Schaprode - At the weekend archaeologists from the state of Mecklenburg-Western Pomerania excavated an area of about 400 square metres in an open field near the Rügen village of Schaprode. To their surprise, they discovered Viking Age necklaces, rings, bracelets, beads, brooches, and 500 to 600 partially split coins - 100 of which are from a period in the late tenth century during King Harald's rule. "This is the largest single find of Bluetooth coins in the southern Baltic Sea region and is therefore of outstanding importance," excavation director Michael Schirren said.With a weight of 0.3 grams, the silver coins bearing a Christian cross were among Denmark’s first independent coins. Harald Bluetooth is regarded as the founder of the Danish empire in that he brought the previously fragmented country together, implemented reforms and introduced Christianity to Denmark.

Tell Umm Amer - The Palestinian government and international organizations started a major excavation to restore St. Hilarion Monastery, locally known as Tell Umm Amer, in the central Gaza Strip, Palestine’s oldest and largest Christian monument. The monastery’s founding text, which was discovered in excavations supervised by the Palestinian Authority in 1994, reveals that the St. Hilarion Monastery was the first Christian landmark in Palestine. It dates back to Hilarion, the founder of Palestinian monasticism. According to Encyclopaedia Britannica, Hilarion was born in Tabatha, south of Gaza, in A.D. 291. He studied in Alexandria, where he became a Christian. He was a disciple of St. Anthony of Egypt and lived with him in the desert. Returning to Palestine in A.D. 306, he started a solitary life by erecting a hut in the wilderness some 7 miles from Maiuma, near Gaza, on the road to Egypt. After establishing the first Palestinian monastery in 329, which grew fast, Hilarion, seeking solitude, migrated first to Thebes, Egypt, and eventually settled and died in Cyprus. Hiam al-Bitar, an archaeologist at the Ministry of Tourism and Antiquities, told Al-Monitor, “The monastery was built in Nuseirat, central Gaza, which was a deserted area over the hills back then. It included a church and a baptismal font.”Today, all that remains are the stone walls, a few Corinthian columns and parts of a mosaic floor. “The church in the monastery was renovated three times during the fourth, fifth and sixth centuries as well as in the early seventh century under the Umayyad Caliphate,” Bitar said. “We can see all these renovations in the three mosaic floors, built on top of each other, spreading over an area of over 8 acres. The baptismal font is in the shape of a cross, and the churchyard is paved with marble. There are over 120 rooms to accommodate deacons and priests as well as visitors, a kitchen, a dining hall, a space to grind wheat and press grapes as well as a water fountain and fish spawning grounds.”

Culloden - The mass grave of Highlanders massacred in the Battle of Culloden may have been discovered by at ground penetrating radar more than 270 years later. History says that 16 of Bonnie Prince Charlie's officers, found hiding in the dungeon at Culloden House, near Inverness, were taken outside by Redcoats and shot and buried by the 'Bargas Tree' in the grounds. Only a small grassy knoll remains where the tree once stood. Now a geophysical survey has shown three pits under the mound. A metal detector survey of the surrounding lawns of the four star Culloden House Hotel uncovered a number of important finds including mid 18th century half pennies, pistol and musket balls, an iron buckle or clasp, military shirt buttons, a set of 18th or 19th century ploughshares, an 10cm ornamental brass base and part of a sword blade. On April 16, 1746 Bonnie Prince Charlie's rebellion to restore the Stuarts to the British Throne came to a bloody end as the government army, led by Charlie's distant cousin William, the Duke of Cumberland, defeated the Jacobites mostly made up of Highlanders on bleak Culloden Moor. The reprisals were swift and bloodthirsty. The slaughter at Culloden House was one of the first acts in the reign of terror to follow ending the Highland way of life forever and earning the Duke the nickname 'Butcher Cumberland'.
http://www.dailymail.co.uk/news/article-5618085/Ground-penetrating-radar-mass-grave-Highlanders-massacred-Battle-Culloden.html