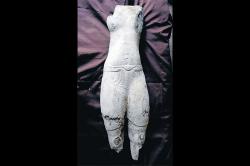 Phetchabun - A recently discovered Khmer-style artefact links a historical northern Thai town to the wider Southeast Asian region, not only proving Thailand’s cultural wealth of old, but also adding an important piece to the puzzle about the region’s trading significance in pre-Siam days.The statue, featuring Vishnu, the revered Hindu deity of South and Southeast Asia, was unearthed at the Sithep Historical Park in Phetchabun. In archaeological and historical terms, it seems to tick a lot of boxes. The statue, missing its head, arms and knees, was excavated from a moat west of Sithep town in late January. While physically incomplete, the piece adds significantly to the knowledge of ancient civilisations before historical records were kept. Pongdhan Sampaongern, chief of the Sithep Historical Park, said the Vishnu statue is similar to others found in ancient sites in other parts of the country including Nakhon Si Thammarat, Surat Thani and Prachin Buri, as well as certain areas in Oc Eo town in Cambodia and the Mekong Delta in Vietnam. 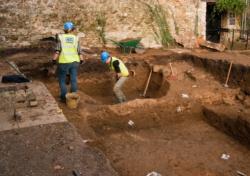 Ely - Archaeologists have been granted a fascinating glimpse back into the early days of Ely Cathedral thanks to excavations taking place within its grounds. In the last week, experts have finished excavating a small parcel of land adjacent to the Almonry restaurant and have unearthed evidence of Aetheldreda’s Gate, also known as the Gate of the Monks, which was demolished back in about 1840. According to archaeologists from Pre-construct Archaeology, who have been working on the site, the stone wall they unearthed in their dig formed “the western side of the gate, which was built in two stages, perhaps dating from 1100c and 1150”. A spokesman said: “We have found that this gate was built across a much earlier ditch, which had a strong bank inside it, protected by large posts set in holes.  “This was presumably the defence of the monastery before the building of the stone gate, and the pottery from it suggests a date in the 10th or 11th century, perhaps the time when Hereward held on to the Isle of Ely against the Norman invaders.”

ROYAUME UNI – Hartlepool - The discovery of an apparent Anglo-Saxon grave underneath a church could be proof of the siting of a Seventh Century monastery. The find, which archaeologists are describing as “exciting”, was unearthed while work is being done to St Hilda’s Church, on Hartlepool’s Headland. The floor has been taken up at the historic church to make way for a new heating system, and experts at Tees Archaeology have been at the church for recording purposes working on two areas measuring 27ft by 27ft. As well as the Anglo-Saxon grave, another six, believed to date between the 1600s and 1900s, were also found, as well as various loose bones. 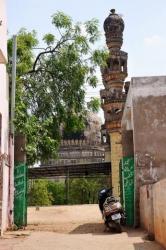 Hyderabad - After Charminar, the latest to fall prey to poor maintenance and sheer apathy of the department is Qutub Shahi Tombs. What strikes one on entering this royal cemetery is the tampering of the compound wall near the booking counter. A full-size iron gate has been installed by removing a portion of the wall to create a passage to the Masjid-e-Abdulla Qutub Shahi from the neighbouring Gulshan Colony. As per records, there is only one entry and exit for the tombs. But a few people from Gulshan Colony wanted to have access to Masjid-e-Abdulla Qutub Shahi and a portion of the wall was tampered to install a gate, says a senior official of Archaeology Department.  The mosque is not far from the main gate. Yet, the residents wanted to have another access claiming that the aged and children were finding it difficult to walk around from the main gate and reach the masjid. 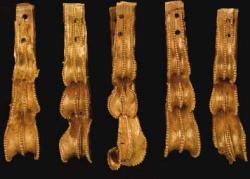 Argos - The Mycenaean cemetery of Deiras, excavated in the beginning and the middle of the 20th century, by W. Vollgraff and J. Deshayes, respectively, has not been studied enough, especially because of the lack of impressive grave goods, which would provide an opportunity for discussion on issues of social differentiation. The recent study of a group of unpublished finds from the Vollgraff excavations, which is kept at the National Archaeological Museum and consists mostly of gold jewellery, as well as a re-examination of the material from the Deshayes excavation, has led to a reconsideration concerning the chronology of the cemetery, its material wealth, contacts with other areas, and the gradual adoption of Mycenaean burial customs by the local population. According to the results of the new study, the cemetery of Deiras was established during the LH IIA period. Until LH IIIA1 it remained a privileged burial ground for social groups with access to important trade networks, co-existing with earlier cemeteries in the southern slopes of the Aspis hill. Deiras became the main cemetery of Argos only in the LH IIIA2 period, and remained so until the LH IIIC period. A comparative assessment of the cemetery with reference to other cemeteries in the Argolid, leads to the hypothesis that it was during the LH II-IIIA1 period that a common code of funeral behavior was actually created on the mainland, a code which put emphasis on rituals taking place before the entrance of the tombs and promoted material wealth as an indicator of social distinction and communal social identity. This research focuses on one more aspect of Late Helladic culture: the technology of the different materials (especially gold), methods of manufacture and the study of the objects through microscopic observation and experimental applications

PALESTINE –  Gaza - UN Watch, an independent Geneva-based monitoring group, has sent a letter to UNESCO, calling on the international body to take immediate action to stop Hamas from bulldozing of a 3000-year-old Gaza harbor for use as a terrorist training camp. The partial destruction of the ancient Anthedon Harbor—which includes the ruins of a Roman temple and archaeological remains from the Persian, Hellenistic, Roman and Byzantine eras—follows its nomination as a World Heritage site.

INDE -  Pattikulam  - A team of archaeologists, while excavating the ancestral property of a villager at Pattikulam near Pottampatti, stumbled upon stone inscriptions and houses dating back to 4th Century AD on Sunday. The team, led by V Narayanamoorthy, secretary of Tamil Nadu Archaeological Research Institute, and P Kannimuthu, historian and archaeologist, found these relics in Palani. The inscriptions bore characters resembling Tamil and Sanskrit scripts. Around three stone houses were found by the team. The team said that the inscriptions were seldom found in Asia. With a big temple nearby, the team said that the findings could not be an isolated incident, and might shed some light on the role played by Palani in ancient times. V Narayanamoorthy said that Palani was the hub of economic activities during the Pandya era. He said that many of the inscriptions found, extolled the architectural style of temples. The team said that the findings gave some clues  about the method of administration in the Pandya era.  According to archaeologists,  the place would have been put to use as a funeral ground till around the 4th century AD, after which the practice was discontinued. Narayanamoorthy said that some human skulls bearing scratches were found giving weight to the theory that the place was a funeral ground.