Metropolis - The vault section, called the ‘boiler room’, which provides a heat source, has been unearthed in the historical bath of the ancient city of Metropolis in the Torbalı district of İzmir. “The building where the bath is located has a large area of 6 thousand square meters. This is an extremely large area, it needs meticulous work. The vaulted gallery we are in is one of the most important halls of the building. The area used as the ‘service corridor’. Along with its terrace, it is one of the most original examples of stone and brick architecture in Anatolia. The bath was built in different phases and dates back to 1800 years ago. First, while it had a small area in the 1st century AD; It was expanded in the 2nd century AD, and its halls were enlarged. Additional buildings such as the vault section have been included in the plan to heat the newly enlarged halls. Stating that the vault section unearthed can be seen as the ‘boiler room’ that provides the heat source of the bath in modern terms, Professor Aybek said, “The ‘Hypocaust’ method, which is the central heating system established by the Romans, used.” The baths are heated by means of perforated bricks placed on both the floor and the wall. The boilers, which are the first step of heating, are located here. The bath is heated by burning the region’s red pine trees in furnaces positioned below ground level, below the three pools in the main area of the bath. 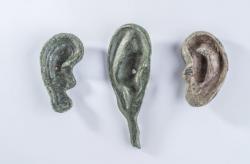 San Casciano dei Bagni  - Excavators working in central Italy near the village of San Casciano dei Bagni discovered statuettes and coins thought to have been left behind by Roman visitors to an ancient Etruscan pool fed by hot springs. The objects may have been offered to the gods believed to have provided the hot water in thanks for relief from respiratory problems and aches and pains, according to Jacopo Tabolli of Siena’s University for Foreigners. Some 700 of the 3,000 coins are still shiny, he added, and may have been thrown into the baths in the third century A.D. by Roman emperor Marcus Aurelius Carus to honor the gods who watched over his health. The statuettes include objects shaped like a phallus, a rare womb made of bronze, a pair of breasts, legs, and arms. Such objects are thought to have been offered in thanks for healing of those body parts, while bronze ears are thought to have been thrown into the pool to call the gods’ attention to prayers. Remnants of fountains, statues, and altars dedicated to Apollo, the god of prophecy and medicine; Isis, the goddess of fertility; and Fortuna Primigenia, the goddess of the first born, were also uncovered at the site. Shimao  - Archaeologists in China have unearthed what they think could be a portrait of a king carved into the foot of the Shimao Pyramid in the Shaanxi province. The sculpture is one of 70-some stone carvings discovered at the base of the 4,300-year-old archeological site in recent months and years. But according to Professor Shao Jing, the lead scientist on the Shimao dig, the king portrait is among the largest—and perhaps the most revealing. Three faces are depicted on the newly excavated, six-foot-tall stone sculpture, with each bearing wide mouths and noses, as well as other adornments, such as earrings. One face, the trio’s biggest, boasts a crown atop its head. But it’s another figure that Shao believes to be the leader.The eastern face that has been unearthed appears to be in the center of the whole group—and maybe the image of the king of the Shimao ancestors. Abu Ghafil- An archaeological dig in Al-Suwaira, some 60km south of Baghdad, has revealed an ancient Parthian (247BC to 224AD) city. The completed 150-day mission took place in Abu Ghafil, near the Al-Suwaira air base, and revealed wooden residential structures as well as 233 artefacts . The artefacts that were found during excavation are mainly household items and include “a typical, simple Parthian jar with a tipped base that was common in that era. 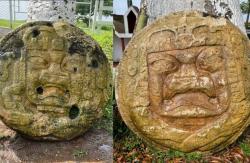 Tenosique - The discovery was made in Tenosique, a municipality in the state of Tabasco, Mexico, and dates from the late Olmec horizon (900-400 BC) during the Formative period. The reliefs are made of limestone and have an approximate diameter of 1.4 metres. Both have a similar iconography, showing a large square-shaped face with a diadem, and glyphs associated with the figure of the jaguar. Beneath the face are a pair of crossed arms, while footprints can be seen on the sides. Archaeologists have determined that the reliefs originate from the Middle Usumacinta region, located between the mouth of the Chacamax River to the Usumacinta and the mouth of the San Pedro River. Based on similar reliefs found in Balancán and Villahermosa, the researchers believe that they depict local rulers performing ritual contortionism. This is done by adopting a stance that reduces the flow of blood and oxygen to the brain to achieve a trance-like state. The team suggests that the Maya adopted this type of Olmec stylism for altars in sites such as Caracol in Belsize, especially the circular reliefs of contortionists after the coastal plains of Tabasco underwent a process of ‘Mayanisation’ around 500-300 BC. Gordion - This year, a Phrygian stone inscription was found in the area of the ancient city called the outer city. The inscription, dated to the years when I. Antiochus (281-261 BC) reigned in the Hellenistic Period, is the first and only inscription in which the name Gordion is mentioned. The inscription, which is thought to be related to a tumulus tomb, is also notable for being the longest inscription ever found in Gordion. This inscription, which was reached in the ancient city, which was under the rule of the Persian Empire between 540-333 BC, also includes a Persian male name. The earliest known inscriptions in Phrygian date from the 8th century BC and were written in an alphabet derived from Phoenician. The language of these inscriptions is known as Paleo-Phrygian. Later inscriptions, in Neo-Phrygian, were written in a version of the Greek alphabet. 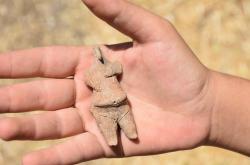 Ulucak – A clay statuette of a female figure dating back 7,800 years was unearthed during the Ulucak Mound excavation in the Kemalpaşa district of the western province of Izmir. Ulucak is the site of the first farmer village settlement of Izmir. "It is among the oldest settlements in Western Anatolia, and we have unearthed findings dating back 8,850 years in the mound " Çevik said. According to Çevik, these kinds of statuettes were previously thought to depict gods and goddesses, however, they were also found in the dumpsite of the ancient mound which leads researchers to believe that they were not sacred pieces. Archaeologists think that the figurines may be related to important events like births, deaths or the harvest and may be used to increase abundance and fertility or for witchcraft.

Al-Faw - Archaeologists working at a site southwest of the Saudi Arabian capital of Riyadh has discovered an 8,000-year-old settlement.  the team uncovered the Neolithic-era remains using laser scanning, aerial photography, drones, and various forms of surveying. The scientists located the settlement at Al-Faw, an archaeological site that has previously turned up evidence of a strong trade network that sustained an ancient city. Along the edge of Mount Tuwaiq, they found a stone temple and pieces of an altar. The archaeologists said these provide a deeper understanding of religious practices in the ancient city at that time. The ancient settlement was accompanied by 2,807 graves from different time periods. The ground in this area was adorned with devotional rock inscriptions, one of which addressed to the ancient god Khaal. The team also identified the foundations of four monumental buildings, corner towers, and open-air courtyards—all of which contained underground reservoirs to store water for agricultural use. Additionally, the archaeologists found evidence of an intricate irrigation system that had canals and cisterns, which would have been used to water several agricultural fields. Access to water allowed the city to thrive amid one of the most arid deserts. Rock drawings etched into Tuwaig Mountain found at the site show daily activities such as fighting, hunting, and traveling. 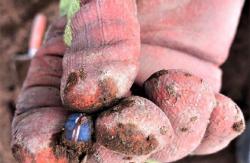 Seyðisfjörður - The early settlement of Iceland is generally believed to have begun in the second half of the 9th century AD. The reasons for the migration are uncertain, but later in the Middle Ages Icelanders themselves tended to cite civil strife or a shortage of arable land as the cause. Archaeologists found a farmstead that dates from the 10th century AD, with structures ranging from AD 940 to 1100, and later additions in AD 1160 to 1300. Landslides deposited material on parts of the site during the 11th century AD, preserving much of the underlying archaeology and organic material. The site was further buried in ashfall from an eruption of the Öræfajökull volcano in AD 1362, an ice-covered volcano that the Norse settlers called Knappafellsjǫkull. The team have uncovered pearls and jewellery, with a 10th or 11th century pearl being decorated with what appears to be the colours of the Icelandic flag, first adopted in 1915 to represent Iceland. Archaeologists also excavated a burial mound containing human remains that was buried with a horse and deposited grave goods such as a spear, a boat seam, iron artefacts and a silver ring.