Birka - A tiny dragon's head, one of the most famous symbols of the Vikings, has been found during excavations in the harbour at Birka in Lake Mälaren. Birka, on Lake Mälaren, 40kms from Stockholm, is thought to be Sweden's oldest town and has been the site of excavations since the 17th century. But the discovery of the dragon's head is one of the most exciting finds in recent years. "We did not understand immediately what we had found - it took a few minutes," said Sven Kalmring, professor at the Centre for Baltic and Scandinavian Archaeology, who's been digging in the ancient town's port together with the Department of Archaeology at Stockholm University. The little dragon's head had been on an ancient costume needle but the needle had long disintegrated. "To the trained eye it's obvious that the dragon is of a design peculiar to Birka," said Kalmring. "It's very exciting." Now Kalmring will spend time analysing and cleaning the find, checking it against similar artefacts uncovered at other Scandinavian sites, such as Funen in Denmark. Established in the middle of the 8th century, Birka was the Baltic link in the river and portage route to the Byzantine Empire. Birka was also important as the site of the first known Christian congregation in Sweden, founded in 831 by Saint Ansgar. Birka has been a UNESCO World Heritage Site since 1993.

Bochaganj - Archaeologists have discovered a millennium-old Hindu temple in northwestern Bangladesh believed to be established during the Pala dynasty, experts in Dhaka said on Saturday. "We found the temple, excavating an area in Bochaganj area of Dinajpur," leader of the excavation campaign Professor Swadhin Sen of Jahangirnagar University said. He added the temple was believed to be built in between 8th and 9th century in this area which is now called Meherpur village of the Bochaganj sub-district. The surprise discovery came as farmers found some archaeological relics like old time bricks whir preparing a piece of land for cultivation, the Daily Star newspaper reported.Sen said they found some terracotta plaques from a trench while the solid objects on the walls surrounding the temple were overly burnt. Another member of the excavation team, Sohag Ali said they had detected idols and staircase of the temple and "we are working to dig those out". The discovery came months after the same team unearthed a Buddhist temple, built around the same time at nearby Basudevpur village, the central edifice of which was built on a platform of 45 metres. The Dhakeshwari Temple, the national temple of Bangladesh and one of the oldest in the country, was built in the 12th century by Ballal Sen during the Sen Dynasty which ruled the region after Pala kings and in popular notion the country's capital Dhaka was named after this temple. 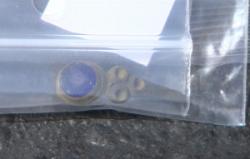 Edmonton - Glass beads, a ring and a clay pipe unearthed during construction of the new Walterdale Bridge tell a new story about Edmonton's earliest days. The items dating from 1810 were discovered last year on the south bank of the North Saskatchewan River, across from where Fort Edmonton used to be. Archeologists say the discovery marks the first time artifacts of that vintage have been found outside the original fort. They also provide clues about how the fort grew into what is now the city of Edmonton. The items were originally from Europe. Eldridge's colleague, Gareth Spicer, speculates they could have belonged to Métis people who worked at Fort Edmonton but lived across the river. "People would have been employed as hunters to supply the fort, carpenters, cooks, tailors,"  he said. "All of that support structure that you needed to keep the facility operating." The items also suggest some people were living a higher quality of life, Spicer said,  "They're decorative items so people wanted to look good and decorate themselves to make an impression on other people, so it's not that different from us."

Thovari hills - The prehistoric petroglyphs (rock engravings) on the Thovari hills near the Edakkal caves in Wayanad district have got a new lease of life, courtesy the district administration. District Collector Kesavendrakumar after a visit to the site on Friday told The Hindu that the district administration had asked the State Archaeology Department to expedite measures to declare the site a protected monument. The engravings, including geometrical signs, and fertility, arrow, and star symbols, besides the newly found anthropomorphic motif, look like the prototype of a figure at the Edakkal caves, and have been in a neglected State for years. The new motif on an angled rock was discovered by a group of rock art enthusiasts while documenting the petroglyphs in the district recently. The Thovari rock engravings are believed to comprise mainly geometrical and abstract figures. Some of the marks closely resemble the Brahmi script. One carving resembles a bird, a specimen of the primitive man’s creative instinct to depict the world around him despite the limitations of his crude tools. However, miscreants and antisocial elements who reportedly frequent the Thovarimala have disfigured some of the carvings by wanton etching. The area around Thovari is rich in megalithic monuments and articles such as burial cists and urns, and stone circles. 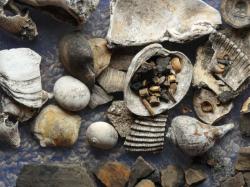 Cocoa Beach - A section of the State Road A1A sidewalk project has been delayed after ancient pottery shards, food remains and shell tools were discovered in the path. Middens are areas used to dump domestic waste such as food scraps. Archaeologists say they can offer valuable insights into how ancient peoples lived. An archaeological consultant has already been on the site. He said there should be test and samples taken for carbon dating. Test digs of about 21/2-foot squares, should be done about every 82 feet, Brech said. He said the site, which stretched onto private property has been know to him and others for several years. He said that without the tests it is not possible to tell from what period it is. He said it is believed the Ais or their ancestors lived there when the ocean met the lagoon in the area. "That site was there probably when there was an inlet there," he said. 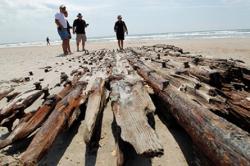 Topsail Inlet - The Sumner ran aground off Topsail Inlet in 1919, according to N.C. Underwater Archaeology Unit shipwreck files. It is periodically visible around the 700 block of North Topsail Drive in Surf City.  Tropical depression Ana shifted the sand along Surf City Beach exposing pieces of the ship, said Surf City Town Manager Larry Bergman. Bergman has seen portions of the Sumner a few times in the past. He said “varying amounts” of the wreck are seen each time.  The best time to see the Sumner is at low-tide.  Archaeologists have known about the Sumner shipwreck for the last five decades, said Billy Ray Morris, deputy state archaeologist in charge of all shipwrecks in North Carolina.

Burnt City - Archaeologists have unearthed the tallest wall ever found near the ancient site of Burnt City in Iran’s southeastern Sistan-Baluchestan province. The brick wall, which was discovered at Taleb Khan Mound, is 160 centimeters tall and dates back to the Burnt City’s fourth stage of civilization.  The sixth phase of archaeological excavations in the area also yielded a clay piece which depicts the leg of a cow and had been part of a figurine created by inhabitants of the area. The ancient piece is about four centimeters long and considered to be the most lifelike artistic creation discovered in the area so far. “This is the most naturalistic artwork from 4,500 years ago. The hoof cleft and the back of the leg have been realistically created and present a unique simulation,” said head of the archaeology team Hossein-Ali Kavosh. The excavation project also yielded a number of intact clay dishes, animal figurines and bricks bearing ancient human finger prints. The Burnt city is one of the largest and richest Bronze Age sites in Iran and the Middle East. 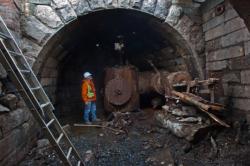 Darmouth - After years of waiting, contractors and archaeologists had their first steps back in time this month as part of old canal system built in the 1800s was revealed under the corner of Prince Albert Road and Pleasant Street. “It’s quite an amazing experience,” Bruce Stewart, archaeological consultant and president of CRM Group said during a site visit May  14 as he stood in the turbine chamber 12 feet underground, water dripping down stone dating back to the 1860s. Regional council has approved $1.2-million for this phase of the Dartmouth Canal Greenway Project, which will see the unearthing of the canal and reconstruction of the site originally built in 1829 as a series of five locks. Those locks were never used since the company went bankrupt, Stewart said, but a second canal system was built in 1862 when it became a marine railway that carried boats via a pulley up to Sullivans Pond, eventually connecting with other lakes and then all the way to the Minas Basin.

Baltimore - With a small budget, a short time frame and a dedicated group of volunteers, archaeologists Jason Shellenhamer and Lisa Kraus are working with neighborhood history buffs to uncover remains of an impressive estate owned by Baltimore merchant and politician William Smith. Shellenhamer and Kraus are focused on an area where they've uncovered part of the fieldstone cellar and foundation of Smith's home, called Eutaw Manor, a site off Eastwood Drive in the Belair-Parkside neighborhood near Arcadia.The property was first settled in 1695, but Smith was its most famous resident. He bought the land in 1770 and lived in a 60-by-60-foot wood frame house. He also had farmland and a milling operation on Herring Run. Smith became rich during the Revolutionary War as a flour merchant and sometimes was derided as a war profiteer for selling his goods to the troops. Later, when he lived at Eutaw Manor, he served as a delegate to the Continental Congress, in the U.S. House of Representatives and in the Maryland Senate. He died in 1814. The Eutaw Manor home burned down in 1865, an event that was chronicled in local newspapers. Smith's descendants who lived there were preparing to welcome guests for a christening when the fire broke out, Shellenhamer said. Artifacts that have been found include some with signs of being damaged by fire, Shellenhamer said. In addition to finding bits of pottery, glass and household items, the dig participants have discovered an underground pile of oyster shells that are likely from the early 1800s, as well as artifacts from the late 1700s in another part of the property — possibly the remains of an earlier structure, Shellenhamer said.