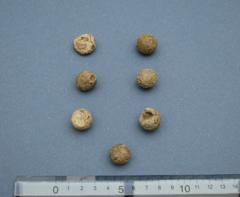 Newbury - Seven ancient bullets that date back to the First Battle of Newbury have been recovered in the town. The discovery has been made by Thames Water archaeologists, who were carrying out a specialist survey on the Civil War site in Essex Street, prior to the start of essential work to replace a century-old water pipe. The ancient bullets, which were found buried underneath the ground in an adjacent field, are thought to have been shot from a carbine rifle. Mike Lang Hall, an archaeologist for Optimise, which is working on behalf of Thames Water, said: “Most of the bullets are consistent with use of a carbine rifle, a weapon that would have been a popular choice in the First Battle of Newbury, which we know took place on this street in September 1643.
“The number of bullets in such a small area reflects the ferocity of the fighting – it is reported that sixty cartloads of dead were taken into Newbury for burial after the battle, in addition to those buried on the battlefield.”

Shangjing - Shangjing City, one of the five capitals of the Liao Empire in Chinese history is located in Chifeng city of North China's Inner-Mongolia Autonomous Region. A large-scale excavation of its relic gate which lasted four months is now over. The excavation has made clear the structure of the city gate and provides an important basis for historical research. Built in 918 AD, Shangjing City of Liao was divided into two city areas, the Imperial City and the Han City. As the first capital built in the plains area by northern minorities, the Imperial City was the residence of Khitan nobles. Its construction strongly emphasized military defense. The highlight of this project is to unearth "Qiandemen", the west gate of the Imperial City, exploring its shape and structure in detail. The excavation work of the city gate started in July. After more than four months, a well reserved gate has been cleared out. According to archeologists, "Qiandemen" had been constructed for three times, twice during the Liao Dynasty and once in Jin Dynasty. The gate constructed in Liao period is 20 meters long and 6.2 meters wide. Stone and wooden doorsill and city gate jamb have been found in the relic site, which indicates the high building level in Liao Dynasty. Archeologist Dong Xinlin, from Chinese Academy of Social Science, said: "There are two parts of 'Qiandemen'. One part is the gateway of the front gate which had a high tower above in the past. The other part is the Weng City that we are looking at. It is aimed at military defense. Walk out of the city and turn left, you can see its gate. We have cleared it too." In 1961, Shangjing City site of Liao Dynasty was one of first batch of cultural relics protected at the national level set by the State Council. Since 1962 small-scale drilling, mapping and experimental excavation had been conducted several times by archeologists. Now it is the first time that an archeologist team from Beijing and Inner Mongolia undertake such a large-scale excavation.

Jérusalem - Archaeologists have resumed excavating the Jerusalem site where the Museum of Tolerance is to go up, amid controversy surrounding the exhumation of skeletons in what had been a Muslim cemetery for nearly 1,000 years.

Dartmoor - An early Bronze Age burial cist containing cremated bones and material dating back 4,000 years has been excavated on Dartmoor. Archaeologists uncovered items from the site on Whitehorse Hill including a woven bag or basket and amber beads. Cists are stone-built chests which are used for the burial of ashes. Archaeologists uncovered cremated human bone and a burnt textile woven bag or basket with stitching on it.
The receptacle contained shale disc beads, amber spherical beads and a circular textile band. The peat and pollen surrounding the cist are due to be analysed and carbon-dated to provide evidence of vegetation and climate at the time of the burial, and the items will be analysed to reveal how they were made and what materials were used. Jane Marchand, senior archaeologist at DNPA, said: "This is a most unusual and fascinating glimpse into what an early Bronze Age grave goods assemblage on Dartmoor might have looked like when it was buried, including the personal possessions of people living on the moor around 4,000 years ago." It is the first excavation of a Dartmoor cist for nearly 100 years, although it is known that about 200 exist on the moor. The cist is to be rebuilt once analysis is concluded.

TAIWAN - San Salvador - Taiwanese and Spanish researchers have been cooperating on an excavation project to find an "embryo city" built by the Spaniards in Taiwan nearly 400 years ago. The excavation, co-funded by Taiwan's National Science Council (NSC) and the Consejo Superior de Investigaciones Cientificas (CSIC), began in early October at Heping Island in the northeastern city of Keelung, where construction of a city named San Salvador began in 1626 during Spain's 1626-1642 occupation of northern Taiwan. At present, archeologists have dug six test pits in a parking lot belonging to Taiwan's China Shipbuilding Corp. in their search for the remains of a Spanish convent that was once part of the city built to ensure Spain's foothold in East Asia maritime trade. The possible location of the convent was determined by Antonio Uriarte of the CSIC and Chang Kun-chen of the National Taipei University of Technology, by taking advantage of a 1667 Dutch map, some Japanese maps of the 1920s and a modern digital map. A ground-penetrating radar survey carried out by a team from National Taiwan Ocean University was also used to identify the possible site, Jose Eugenio Borao Mateo, the National Taiwan University professor who is leading the project, told CNA recently. The researchers have found a pile of stones that extends for about one meter and is 30 centimeters wide, but were hesitant to link it to the convent. The San Salvador fort was built to counterbalance Dutch power in southern Taiwan and to safeguard Spanish interests in the shipping route between China's Fujian and Manila in the Philippines. 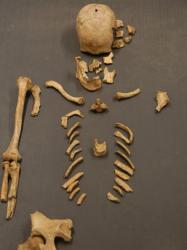 Gloucester - A set of human bones at Gloucester museum, always believed to be from the Stone Age, are now thought to be only about 500 years old. The remains, which have been in storage for more than a century, were labelled "from a long barrow". Long barrows are ancient Neolithic burial sites from about 6,000 year ago, but radio carbon dating has shown the bones date to between 1523 and 1799.