Istanbul - During the archaeological excavations in and around the Million Stone, located right next to the Basilica Cistern and is considered the zero point of the world, opposite the Hagia Sophia in Istanbul’s Fatih district, the remains of buildings that are believed to be a neighborhood in the Ottoman Empire and walls from the Byzantine era have been unearthed.  It was even understood that the Ottomans noticed the Byzantine walls while constructing the structures and used these structures in the foundations of the buildings to make the building more solid. Also, during the works conducted in the northeast of the water level, it is estimated that there is a cistern structure dating back to the late Ottoman period and a bath adjacent to the water level.

EGYPTE – Assouan - A tomb from the Greco-Roman era containing around 20 mummies has been discovered in Egypt’s western Aswan region.  A joint Egyptian-Italian archaeological mission working in the vicinity of the Aga Khan Mausoleum made the find. Mostafa Waziri, secretary-general of the Supreme Council of Antiquities, said the tomb had two parts. The first was above the ground and the second was carved into the rock. The first part was a rectangular sandstone and mudbrick building. The tomb’s entrance was surrounded by stone blocks covered with a mudbrick vault. The second part was carved out of rock and the entrance led to a rectangular courtyard in which four burial chambers were carved. These had 20 mummies, most of which were in good condition. Preliminary studies have indicated that this mass grave includes the bodies from more than one family. The mission found many archaeological artifacts inside the tomb, which dated back to the Greco-Roman era, including offering tables, stone panels with hieroglyphic texts, and a copper necklace decorated with Greek writing and the name Nicostratus.They also found a number of coffins in good condition, some of which were made from sandstone.

Norfolk - A cache of gold coins found buried on farmland in the United Kingdom has caught the attention of coin experts, who have linked the treasure trove to the Roman Empire. So far, metal detectorists have discovered 11 coins on a remote stretch of cultivated field located in Norfolk, a rural county near England's eastern coast, and experts remain hopeful that more could be unearthed in the future. Marsden dated the "exceptional" bounty of gold coins to sometime between the first century B.C. and the first century A.D. Interestingly, all of the coins were minted before the Roman conquest, when Britain became occupied by Roman forces starting in A.D. 43 after an invasion launched by Rome's fourth emperor, Claudius. Which raises the question: How did the coins end up in a field years before the arrival of Roman forces? It's possible that they could've been part of some type of offering to the gods, but more likely someone buried them with the intention of recovering them later. Gold was often used as trade, so it's possible that a local tribe could've gotten ahold of the coins and perhaps planned to use them for other things, such as melting them down to make jewelry. The farmland where the coins were found sits on land once occupied by the Iceni, a tribe of British Celts.

Ararat 1 Cave -  Researcher and archaeological scientist Ellery Frahm has published a picture of a tiny, prehistoric obsidian flake discovered in Armenia. "It might not be the prettiest artifact from Ararat 1 Cave, but my chemical tests in our field lab established that this tiny obsidian flake was removed in order to resharpen a stone tool that, about 45,000 years ago, had been carried more than 200 km," Frahm said . Frahm's team earlier found another minuscule obsidian projectile, most likely dating to the Chalcolithic period, on the first day of their excavations at the cave. The obsidian comes from Geghasar volcano — 40 km away linearly, but farther on foot. 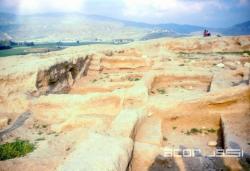 Tell Deir ‘Alla -  The site of Tell Deir ‘Alla, in the central Jordan Valley, was a settlement during the 13th century BC and functioned as a town. Unfortunately, neither burials nor a cemetery dating to the period ranging from ca. 1300-1000 BC, belonging to the dwellers of Tell Deir ‘Alla, were found at the site or in the close neighbourhood. Scholars argued that the uncovered Late Bronze Age II (ca. 1400-1300 BC) graves at the site of Kataretes-Samra, located only 6km to the southeast of Tell Deir ‘Alla may belong to the dead people of the site at that time. In 2010 a Jordanian-Dutch team founded the site situated between the villages of Sawalha and Abu Nu’aym belonging to the Deir ‘Alla municipality, Kafafi continued. A bell-shaped pit was revealed below the surface soil which widened out to three metres in diameter and reached to two metres in depth. The excavators uncovered fragmentary human remains inside this pit, which were dated to the Iron Age. In 1977, the cemetery of Tell Mazar, situated around three kilometres north-northwest of Tell Deir ‘Alla, was found in an area located only 220 metres to the west of the main settlement. Moreover, the cemetery consisted of Iron Age architectural debris ranging between the 11th and mid-10th centuries BC, which formed a mound rising ca. 1.80m above the surrounding farmland, and sloping to the north and south directions, Inside the cemetery, 84 graves were found; unfortunately, the cemetery does not exist anymore, this is due to the cultivation operation, the material excavated inside the graves pointed to the Iron Age II C period (ca. 700-586 BC).  The dead were buried in one-metre-deep graves. Funerary objects were put with the dead. The kind and type of gifts are enlightening about the social status of the buried people. Funerary equipment consisted of metal such as pins, fibulae, daggers, swords, knives, arrowheads, spearheads, bracelets, armlets, belts, anklets, seals, scarabs, beads and pottery vessels. Although the results of the excavations at Tell Deir ‘Alla did not reveal that much archaeological data from the second half of the Iron Age I (ca. 1100-1000 BC), it seems that Tell Deir ‘Alla and adjacent sites flourished culturally during the later Iron Age (ca. 1000-586 BC),

Adelaide - A team of researchers led by Christine Adams has measured the levels of strontium isotopes in the teeth of early South Australian colonists who were buried before 1880 in unmarked graves in the free ground section at the Anglican Parish of St. Mary’s Church in Adelaide. The study suggests that just one of the 13 people had been born in Adelaide, while eight of them had been born in Britain or Ireland. Just three of the individuals could have spent their childhoods in either location. The last person in the sample was likely born and raised somewhere else. Team member Donald Pate explained that isotope analysis offers important information about migration and mobility in the colonial population because the lives of these people were not well documented.

ESPAGNE –  Artieda - In 2018, the City Council of Artieda—located in northeastern Spain in the province of Zaragoza, and part of the country’s Aragon region—asked the University of Zaragoza’s Archaeology Department for help in studying some ruins located around the San Pedro hermitage, known variously as El Forau de la Tuta, Campo de la Virgen, or Campo del Royo. Three years later, the experts have confirmed that these sites formed a large single archaeological complex, and they detected two phases of occupation on the surface of the site: one during the imperial Roman period (the 1st to 5th centuries) and another during the early-medieval Christian era (the 9th to 13th centuries). Now, the research team has published the results in a report, El Forau de la Tuta: A Hitherto Unknown Roman Imperial City on the Southern Slopes of the Pyrenees. It is striking that, despite the city’s large dimensions and “buildings of monumental proportions,” no one knows its ancient name. The report notes that based on important evidence from the ruins preserved in the hermitage, as well as artifacts held in various public and private collections and the findings at the site, the settlement was “of urban character—the city’s name is currently unknown—and it developed during the [Roman] imperial period. Later, the same site took on another iteration as a rural habitat during the Visigoth and early Andalusian periods.”The specialists have also found that, between the ninth and thirteenth centuries, another peasant habitat-type town or village was superimposed on top of the Roman settlement. They have identified the village as Artede, Arteda, Artieda or Arteda Ciuitate. The medieval enclave’s ruins include the leader of the church’s remains, embedded in the San Pedro hermitage; numerous silos with circular openings, which were excavated from the subsoil and only perceptible by geo-radar; and an extensive cemetery consistent with Christian burial rites (the Paleoymás company partially investigated the latter in 2020). Dated between the 1st and 2nd centuries, the urban complex had infrastructure and public areas, including baths, water supply, streets, sewers, and possibly a temple.

MEXIQUE -  Palenque - INAH have uncovered a stone workshop and a cemetery at Palenque, a Maya city in southern Mexico. Tools for hunting, food preparation, and ritual sacrifices were constructed in the workshop between A.D. 600 and 850. More than 2,000 artifacts were recovered from the workshop, said Diego Prieto Hernández, director general of INAH. In the cemetery, researchers uncovered the remains of a woman who died around A.D. 800. Her remains show cranial deformation and inlays of precious stones in her teeth. The burial could offer insights into the role of women in ancient Maya society, Hernández explained.