TURQUIE -  Heraklia- Prehistoric rock paintings in the ancient city of Heraklia in the western province of Muğla’s Milas district cannot be protected, according to locals and experts. The paintings are from 8,000 years ago.Located around the Beşparmak Mountains, Heraklia is one of the most popular places among tourists thanks to its historical and natural beauties. Among the most interesting pieces at the ancient site are rock paintings. The rock paintings, which were discovered in 1994 by Dr. Anneliese Peschlow-Bindokat, a member of the Berlin German Archaeology Institute, which carries out archaeological works in the region, are in danger of perishing because of damage. Religious motifs and figures, which were painted on a rock next to the semi-ruined Yediler Monastery, have been damaged recently by unidentified people.

Tilaurakot - A team of renowned archaeologists from within the country and abroad have made significant headway in providing evidence substantiating historical significance of Tilaurakot, believed to be the ancient Shakya Capital where Prince Siddhartha Gautam spent 29 years of his life before becoming Gautam Buddha, since the commencement of the third phase of excavations in the area. The team started excavations in four locations two days ago and found remains of an ancient settlement along with roads. They have dug a 30 metre length and one metre wide trench 20 metres west of the eastern palace gates, and two trenches, each spanning 3 metres in length and width, and another one which is 30 metres long and one metre wide near the palace temple. Meanwhile, the team has started excavating near the remains of a wall found just half a metre below the surface where they dug after finding pieces of bricks with specific patterns on them, a probable indication of the location’s significance. Similarly, the team has found remains of a monastery southwards and a pond in the east during the excavations carried out in the palace premises situated in a field located 20 metres west of Kanthak Stupa. The geophysical survey, last year, had shown the remains of a monastery and pond at the site.

Bargylia - Those wandering around the Aegean resort town of Bodrum looking for a cozy private plot of land entrenched in history might just be in luck, because a local real estate agency may have what they need: An ancient city dating back to the 5th century B.C. located near Güllük Bay on the northern coast of the Bodrum peninsula. The agency promoted the sale of the ancient Greek town of Bargylia with an advertisement not unlike those for regular summer houses or hotels. “A first degree archaeological site, facing the Bird Heaven Lake near the Boğaziçi Village, with full sea and lake view,” the advertisement says. As no construction is permitted in first-degree archaeological sites, the agency’s advertisement underlines that no excavations have been made on the site yet. So, according to the advertisement, the new owners will be free to enjoy an amphitheater hinted to be underground, an area which is believed to belong to the city’s temple, the remains of a Roman bath and a necropolis from the Byzantine era, all for the trifle of 22 million Turkish Liras (around $10 million). The advertisement also promotes Bargylia as a site named by Bellerophontes, the mythological hero who slayed the Chimera to honor his friend Barglos killed by Pegasus.

Chandrawati  - Archaeologists and researchers are all set to take off for the second phase of Chandrawati Archaeological Research Project at Abu Road in Sirohi district that is expected to begin this week. The project is a joint venture of Department of Archaeology and Museums and JRN Rajasthan Vidyapeeth, Udaipur. The second phase of exploration will continue till the mid of February. The first season, which culminated in February last year, had unearthed ruins depicting the glory of the 1000-year-old Parmar dynasty.Chandrawati is a village spread over 150 bigha in Sirohi district. It was the well known capital of the Arbud branch of the Parmar dynasty. The debris of the ancient city is believed to be spread in a circumference of about 32 kilometres including the area of Amirgarh, Maval, Siyava, Santpur, Moongthala and Paldi.This is state government's first excavation in the last 20 years. The archaeologists had discovered a fort and large number of residential structures during the first phase. Several metals, terracotta and stone objects were unearthed. "We had set off for digging after an intensive ground survey and had got encouraging details to reveal a lot about the ancient town which had been lost in the pages of history, prof Jeevan Kharakwal, director of the research project, said."This season we are planning to continue the work we initiated last time in order to understand that culture's phases, which possibly belongs to late historical phase. In addition to this, we plan to got for cutting at a very high mound to understand the nature of deposit," said the excavation in-charge.Scholars from BSIP Lucknow, Deccan College and other universities will be participating in the excavation. "The settlement has perhaps four fortified enclosures, out of which one is visible on the surface. Another one we discovered last season. There are two more and of these we plan to open the bigger one this season apart from lower levels of the settlement," Kharakwal said.A station team to prepare a contour map of the site has been hired by the department and the map will be ready by next week. The major objective of the excavation is to understand cultural sequence, expansion and function of the ancient town. Besides, it also aims at understanding contemporary climate, subsistence and varied technologies.

Burnt City - A piece of leather bearing drawings has been discovered in the 5200-year-old Burnt City in southeastern Iran.A team of archaeologists led by Professor Seyyed Mansur Sajjadi has unearthed the leather during the new season of excavation currently underway at the site.“Due to extensive corrosion, some experts and the archaeologists are trying to save the leather,” Sajjadi told the Research Center for Cultural Heritage and Tourism on Monday.No more details were mentioned about the artifact.Ruins of a structure were also unearthed in the urban area of the Burnt City, which has two walls each one meter thick that are supported by nine buttresses. “The signs of fire are clearly seen in some rooms of the building,” Sajjadi stated.He also said that the team discovered a small room in building, which is surmised to have been used as a place for offering sacrifices.The team also found some pieces of plain and colored textiles in the rooms.
The Burnt City, which was registered on UNESCO’s World Heritage List in June 2014, is located 57 kilometers from the town of Zabol in Sistan-Baluchestan Province.The city, which was the largest urban settlement in the eastern half of the Iranian Plateau, burned down three times and was not rebuilt after the last fire in around 1800 BC.Despite the excavations and studies carried out at the site, the reasons for the unexpected rise and fall of the Burnt City still seem to remain a mystery.
A 10-centimeter ruler with an accuracy of half a millimeter, an artificial eyeball, an earthenware bowl bearing the world’s oldest example of animation and many other artifacts have been discovered among the ruins of the city in the course of the many seasons of archaeological excavations conducted by Iranian teams.

Dunluce - A buried settlement dubbed "little Pompeii" is even older than first thought, archaeologists have revealed.Remains have been uncovered of a fireplace dating to the late 15th century near Dunluce Castle on Northern Ireland's dramatic North Coast. The fortress was built by an Irish chief and dominated a flourishing town around it until the area was burned and abandoned following a conflict in 1642.  Relics have been discovered in exceptional condition inches below today's surface. Stormont environment minister Mark H Durkan said: "We are extremely lucky to make this exciting discovery. Very few 15th-century buildings, other than those built entirely from stone, have survived in Ulster and normally there would be few traces, if any, for archaeologists to investigate." The site is close to the Giant's Causeway World Heritage Site.Traces of buildings were unearthed close to the cliffs upon which the castle was built. These buildings most likely formed a small settlement, just outside the original castle gate. They pre-date the later expansion of the castle complex and development of 17th-century Dunluce Town, experts said. Between 2009 and 2012, archaeologists uncovered the lost town of Dunluce, dating back to 1608. A recent dig, undertaken by the Northern Ireland Environment Agency (NIEA), to reveal more of the town uncovered evidence of the earlier settlement from the late 15th century.An important discovery was made in a field lying east of the castle. The archaeologists found the remains of a stone-built structure that had a doorway at the corner, which is quite different to the 17th-century buildings revealed to date. A fireplace in the building has been scientifically dated to the late 15th century. This led archaeologists to suspect an earlier phase of settlement, Mr Durkan said, dating to around the time the McQuillan clan built the castle. Pottery from the late medieval period was also recovered from the structure. From this strong fortress the McQuillan family controlled a territory on the north Antrim coast known as The Route which stretched along the coast between the rivers Bann and Bush. Their Scottish neighbours in the Glens of Antrim, the MacDonnells, gradually displaced them from the Route and took over Dunluce Castle in the 1550s. 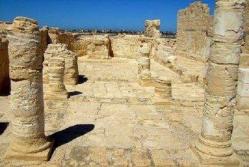 Alexandrie - 13 pivotal archaeological projects in Alexandria have been stopped since the uprising in 2011 due to lack of funding. Officials from Antiquities Ministry said that resuming such projects require at least LE320 million. An informed source from West Delta sector for Coptic and Islamic antiquities said that the suspended projects consist of the tea hall, the Roman-Greek Museum, Al-Shorbagy mosque, Terbana mosque, Alexandria Appeals Court, Mosaic Museum, Abu Mina archaeological site, mosques of Zaghloul and al-Mahalli in Rashid, in addition to another four archaeological mosques in Fouh city and Kafr al-Sheikh Museum.
http://www.egyptindependent.com/