Val Venosta - Archaeologists have officially announced the discovery of a couple of stelae-statues  - antropomorphic standing stones - in Val Venosta, a valley in the western part of South Tyrol, Italy. The stones date back to the Copper Age, about 3000 BCE, and they have been discovered last year, during construction works in Vezzano, a small village at the foot of MezzodÃ¬ (Sonnenberg) mountain. Catrin Marzoli, head of the local Archaeological Heritage Office, said the statues are made of Lasa marble. This kind of marble extracted from the Jennwand near Laas (Lasa), is an exceptionally hard, durable material which wears well in adverse weather conditions and has been used for centuries in many buildings and monuments, including the monument to Queen Victoria in front of Buckingham Palace in London. One of the ancient statues represents a woman with a shawl and a long dress, while on the other stone slab, broken in two pieces, is carved a male figure, with several knives and a wide belt. The latter stone is unusually tall for this kind of monuments, measuring 3,4m.The statues will be put on display in the Schlandersburg castle in Silandro. 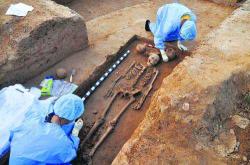 Rakhigarhi - Four human skeletons dating back to the 5000-year-old Harappan era have been recovered from a cemetery located at Rakhigarhi village in Hisar. Enthused at the recovery of well-preserved skeletons, archaeologists hope forensic scientists will reconstruct the DNA extracted from bones to help decipher the history and origin of the human settlement, which is part of the Indus Valley civilisation.The skeletons of two adult males, a female and a child have been found.

Chellapura - Although the discovery of three arches in the old city, believed to be of the Qutub Shahi-era, had generated considerable excitement on Sunday, the demolition of the structure housing it on Monday has thwarted any further exploration into the site. Excavation activity at the old police quarters in Chellapura had attracted attention on Sunday following the discovery of three medieval-looking arches in the cellar. Word soon spread of the find and rumours of a long-lost tunnel from Charminar to Golconda gained currency. Some even spoke of a treasure. Experts from both Archaeological Survey of India (ASI) and Telangana State Department of Archaeology and Museums (TSDAM) mentioned a structure from the Qutub Shahi era, possibly a serai(rest house), which is not uncommon given the area’s proximity to Charminar.