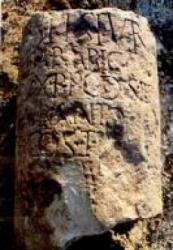 Poverty Point - In 2011, Poverty Point was named one of two American sites selected by the U.S. Department of the Interior for future nomination as a prestigious UNESCO World Heritage Site. The Native American earthworks at Poverty Point were constructed 3,100-3,700 years ago alongside Bayou Macon in West Carroll Parish. Today, the 402-acre site contains five mounds, a 35-acre plaza and a huge semi-circle of ridges. Thousands of artifacts have been found: baked clay cooking objects called "Poverty Point objects," projectile points, stone hoes and adzes; beads, small human effigies, animal carvings, including the famous Poverty Point owls made of red jasper. When archaeologists speak of Poverty Point, they emphasize the enormous planning and organization that went into the building of the ridges, plaza and mounds (the Bird Mound is 70 feet tall). They also speak of the tons of stone that were imported to the site—some of the rocks came from hundreds of miles away. For these and other reasons, Poverty Point represents the most complex society of its time in North America. Yet the peoples of Poverty Point were exclusively hunter/fisher/gatherers. Signs of agriculture are not found at the site.

Lake Minnetonka - A renewed effort to see what's lurking at the bottom of Lake Minnetonka has uncovered three historically significant shipwrecks from when the lake was a popular tourist attraction at the turn of the 20th century. Six other wrecks are already widely known in the lake, five of them on the north side of Big Island, where a large amusement park drew tens of thousands of tourists in the early 1900s.  The new wrecks were found in St. Albans Bay, Wayzata Bay and northeast of Big Island. The Wayzata Bay wreck is about 70 feet long and 20 feet wide, sitting in about 40 feet of water. It was likely a steamboat. The vessel in St. Albans Bay, also 40 feet underwater, is slightly shorter and wider, and appears to be a barge that may have been built around 1925. The wreck northeast of Big Island is about 60 feet deep, and is probably a 50-foot steam or gasoline-powered launch from the late 1800s. Merriman and Olson plan to survey the other half of Lake Minnetonka next month. 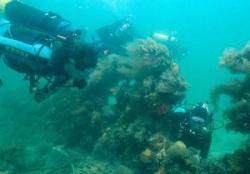 St Leonards - Archaeologists will mobilise a world-first research processing model as they excavate secrets from colonial trading ship the Clarence, wrecked near St Leonards. Advances in digital and X-ray technology will enable new rapid analysis and recording of fragments of loose material lifted to a barge above the vessel by members of a 60-strong research team. The Australian-built Clarence has rested on and in the sand since 1850 when it hit a sandbar while transporting 132 sheep from Melbourne to Hobart. People aboard the ship survived the wrecking and people from Geelong rescued the sheep.The wreck was discovered in 1982 in about five metres of water about 300m offshore and is heritage-listed.

USA – Middletown - Archaeological Dig Aims To Learn About Residents Of Beman Triangle. Fifteen volunteers knelt in dirt digging for household items on Saturday, starting an excavation intended to discover more about the culture of a once-prosperous African American community in town. Its focus is the area now known as the Beman Triangle, a historic landmark in Middletown bordered by Vine Street, Cross Street and Knowles Avenue. It was the site of a successful and religious African American community from 1847 to the 1920s. Many residents were involved with the Underground Railroad, the temperance movement and abolitionist societies. The five-acre property was established by Leverett Beman, a shoemaker who wanted to develop a supportive African American community. Once Beman purchased, divided and moved onto the land in 1847, members of the A.M.E. Zion Church built and moved into 17 other homes in the area. The church became a central part of the community, and residents thrived socially and economically despite ongoing racism.

TOBAGO - Scarborough Harbour - The Executive Council of the Tobago House of Assembly (THA) has given approval to the University of Connecticut and the Institute of Nautical Archaeology of the United States to salvage shipwrecks on the seabed of the Scarborough Harbour that have been there for more than four centuries. An underwater search will be launched in the third quarter of this year for 12 Dutch ships sunk during fierce battles for the island. 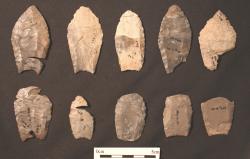 Crowfield  - Canadian archaeologists Brian Deller and Christopher Ellis have been studying the Crowfield site in southwestern Ontario since the 1980s. In a recently published report, the researchers make the bold claim that the area is “one of the most important Paleo-Indian sites ever reported.” The reason for its importance, they say, is the light it casts on the symbolic aspects of ancient lives. The Crowfield site is on a sandy knoll near the town of Strathroy. The principal feature is a shallow pit that contains the burned fragments of more than 180 flint tools, including 17 spear points of a type known to have been used by some of the earliest people to inhabit the region — the so-called Paleo-Indians. Deller and Ellis say the pit represents the cremation burial of a Paleo-Indian, but they argue that any ancient bones that might have been present there have completely decomposed over the millennia. With no human remains to go by, why do they say it was a cremation? Deller and Ellis painstakingly demonstrated that the artifacts were tools that had been used, but not used up. Second, the tools had been burned where they were found. Moreover, the burning had been deliberate. Deller and Ellis argue that this collection of artifacts constituted the basic tool kit of an individual Paleo-Indian. Since it’s unlikely that someone would deliberately destroy all of his or her tools, which were in good working order, the simplest explanation was that the person had died and the tools had been cremated along with the body. Whether the group believed the deceased would need those tools in the afterlife or feared the spirit of the departed would be dangerously attached to them, this deposit of flint artifacts had become more than mere tools. Their destruction represented the loss of valuable objects to the band and might have satisfied some sacred ritual obligation. Deller’s and Ellis’ work at Crowfield is a landmark in Great Lakes archaeology because of what it adds to our knowledge of Paleo-Indian ritual and how it shows that archaeology can glean this knowledge from bits of broken flint.