Saqqara - A Ministry of Antiquities official was charged Sunday with spreading “false news” in 2014 on probable collapse of Pyramid of Djoser (4,600-year-old Step Pyramid of Sakkara) due to ongoing restoration works, according to a statement from the prosecution. In Head of Documentation department of the Ministry Nour Abdel-Samad has previously said in media remarks that Pyramid of Djoser was due to collapse due to ‘wrong restoration’. In response to the allegations, Damaty held a news conference by the pyramid in mid-September, during which he refuted any structural collapse or shoddy repairs to the structure. Three committees of experts, engineers from Egypt and the UNESCO have been appointed to do reports on the restoration works. The prosecution’s order came upon reports from three committees, including members from UNESCO and Egyptian Engineering Cairo and Azhar Faculties, and archeologists, to study the restoration works. The reports pointed that due to restoration works, the pyramid is more stable but needs to complete all restoration works quickly. The Step Pyramid, a world-heritage site listed by UNESCO, was built in the 26th century B.C. to house the mummy of Pharaoh Djoser, the founder of the Third Dynasty. It is composed of six successively smaller mastabas (benches), one on top of the other. The pyramid was badly damaged in a 1992 earthquake, which caused severe damage to the walls of its burial chamber and the descending passages leading to it, in addition to the collapse of a huge chunk of the pyramid’s southern side.

CHINE - Qagan Gol  -  Chinese archaeologists have found a 3,000-year-old stone coffin which contains a smaller casket inside at a site in northwest China's Xinjiang Uygur Autonomous Region. The discovery, the first of its kind in Xinjiang, was made earlier this month by researchers with the Institute of Archaeology of the Chinese Academy of Social Sciences in Qagan Gol Township, Qinghe County. Scattered bones were found in the large casket, which is about 3 meters long and 1.65 meters wide. Associate researcher Guo Wu, who led the excavation, speculated that the casket was not the first home of the remains, but noted that conclusion could only be confirmed after scientific tests. Inside the small casket, which is around 1.7 meters long and 1.5 meters wide, a complete skeleton of a woman was discovered along with pottery, bone and stone tools, according to Guo. The large coffin was built between 3,800 and 3,500 years ago and small one between 2,800 and 2,500 years ago. The researchers speculated the small casket was made by those who wanted to "reuse" the large one. Guo said they are using a drone to obtain images of the coffins from all angles, adding that the findings are significant for research on the history and culture of early nomads in the Altai region. 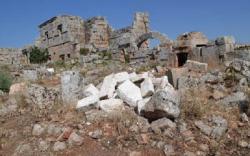 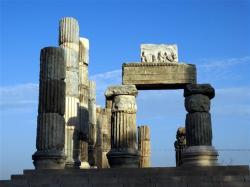 Gülpınar - ew findings obtained at the Temple of Apollo, located in the village of Gülpınar in the northwestern province of Çanakkale’s Ayvacık district, have revealed a residence, revealing plans and gardens of various eras.  The Temple of Apollo Smintheus, which became nonfunctional some 1,500 years ago, was used for different purposes in each era. Damage caused by humans, as well as earthquakes and other natural factors, have not even survived alluvial deposits that cover the temple.  The temple was used as a church at first and then as a residence, painting a picture of houses and gardens throughout history. Its blocs were redesigned as structural material, press tone, well curb, mortar and trough, losing its original form.  Academics on the excavation team who have so far published articles on the importance and architecture of the temple informed the scientific world about it.  Works have revealed that all marble blocks of the temple had been used in various structures. Spanning around an area of 25 kilometers, the collection of marble blocks and excavations have been around for years.  The Apollon Smitheus Temple is located in the Bahçeleriçi area, in a valley between the northwest and northeast of the Gülpınar village.  It was built in the second half of the 2nd century B.C., as a sacred place in the Troas region. Architext Hermogenes designed the temple using the pseudodipteral style. The temple contains three chambers, including a pronaos (sacred front chamber), a naos (sacred room) and an opisthodomos (back chamber), as well as the statue of Apollo made by the sculptor, Skopas.
http://www.hurriyetdailynews.com/new-findings-shed-light-on-temple-of-apollo-.aspx?pageID=238&nID=89811&NewsCatID=375