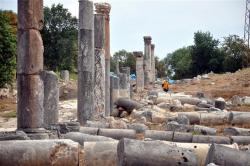 USA - Minnetonka - Experts had surveyed the land before a major construction project on County Road 101 in Minnetonka started last fall and thought that the large burial mounds were located 30 to 50 feet east of the site. As a result, they didn’t find anything, and the state signed off on the work. But when the work began and bulldozers unearthed quarter-sized bone fragments, the work was halted immediately. Restoration work could take at least the next four weeks, as crews meticulously recover artifacts and sift through dirt to restore the mounds. Minnesota is home to an estimated 12,000 known mounds, the final resting places of Indians from about 500 B.C. through 1500 A.D., according to the state archaeology office. On Lake Minnetonka, 524 mounds were mapped in the 1880s. Along the lake, the city of Mound was even named after the mounds discovered there and made between 300 B.C. and 100 A.D. Now, more than 40 mounds are estimated to be along the lake. 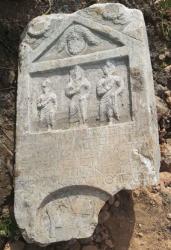 İnegöl - Columns and column capitals were uncovered during an unlicensed dig on farmland belonging to a local farmer in İnegöl’s Hacıkara neighborhood two weeks ago. The area has since been declared a First Degree Archaeological Site. After the find in the Hacıkara neighborhood, some locals in the Çitli neighborhood noticed something unusual in a dry creek bed and notified the local gendarmerie forces. Upon inspecting the dry creek bed, the teams from the Gendarmerie Command requested excavation machines from the İnegöl Municipality and were able to recover a historic tombstone. The two meter long tombstone is thought to predate even the Roman period and has also been delivered to the Bursa Museum Directorate. Meanwhile on Tuesday in İnegöl’s Karalar neighborhood another tombstone was discovered during municipal infrastructure construction. The construction team noticed that the rock the excavator had gotten its bucket stuck on was actually a historic tombstone and immediately called over the local gendarmerie. Unearthed with great difficulty, the tombstone bears engravings of a comb and a sickle and is believed to have belonged to a woman. It too was delivered to the Bursa Museum Directorate. 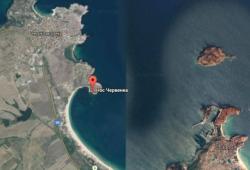 Cap Chervenka - Archaeologists from Bulgaria’s National Museum of History have started their 2015 excavations of aLate Antiquity Early Byzantine fortress located on the Cape of Chervenka near the Black Sea resort town of Chernomorets.“The inspection and the drilling excavations from last year confirmed that the peninsula was surrounded with a strongfortress wall, with fortress towers every 30 meters, which would make this one of the largest fortified cities in Bulgaria from the Late Antiquity since the fortress wall is from the 6th century, and was built as part of the large-scale fortress construction at the time of Byzantine Emperor Justinian I the Great (r. 527-565 AD),” elaborates the head ofBulgaria’s National Museum of History.A large fortress tower with dimensions 5 by 6 meters unearthed by Ivan Hristov’s team in 2014 is taken to indicate that the fortified Byzantine settlement located on Cape Chervenka was a rich city, whose name, however, remains unknown.

Fort Herie - Pieces of Canadian history are being unearthed on the shores of Fort Erie. When the archaeological team is finished its month-long dig we’ll have a better picture of what every day life was like before the War of 1812. Along the Niagara Parkway, beside Old Fort Erie, John Triggs and archaeology students from Wilfrid Laurier University are starting an excavation that will uncover pieces of Canadian history. They are digging and sifting through piles of soil and turning up pieces like porcelain teacups, butchered animal bones and old nails used in houses they built back then. 2 years ago Triggs and his team were on the other side of the hill digging up artifacts from a fierce military battle. “August 15, 1812, Douglas Battery was the site of the deadliest day of the war, within these grounds near Old Fort Erie is buried an archeological treasure.” Thousands of artifacts, when pieced together will give everyone a clearer picture of what life was like in Southern Ontario more than 200 years ago. 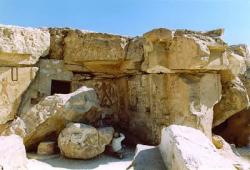 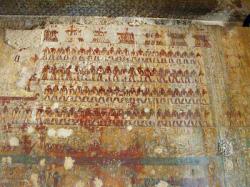 Deir el-Bersha - The tomb of Djehutyhotep in Deir el-Bersha, dating to the 12th Dynasty in the Middle Kingdom, got looted ten days ago, when they hacked out its unique scenes and smuggled them. The tomb was famous for the scene of the colossal statue being dragged by ropes. Several objects that came out of the tomb are now in the Cairo, British and Metropolitan museum ...The theft has been confirmed; a panel of 25 x 20 cm was hacked out by looters from the offering scene. There is also a debate on whether a scene of a musician is missing from the main scene of transferring the statue...