Téhéran - Archaeologists found the 7,000-year-old skeleton in their excavations in Molavi Street in the south of Tehran. According to the initial estimates, the human bones belong to 5,000 year B.C., Press TV reported.Previously, the oldest archaeological findings ever retrieved in Tehran belonged to city’s Qeytarieh hills, which dated back to the first millennium B.C.Many other historic items, most of them belonging to the previous centuries, have also been excavated in the site, which is located around Tehran’s Grand Bazaar.According to the reports, the new skeleton is expected to be put on display in Iran’s national museum after the forensic tests are completed. 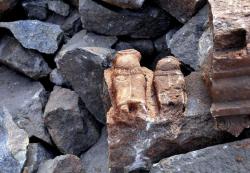 Tali - The rock carvings unearthed recently during the renovation work at the centuries old Tali Siva temple here will be examined by two senior officials of the State Archaeology Department before preparing a report assessing the archaeological significance of the rock pieces. The Director of Archaeology G. Prem Kumar told The Hindu on Monday that the curator of the Thrissur Shakthan Thampuran Museum and the Publication Officer of the Archaeology Department would examine the carvings on Tuesday.  Earlier, the department had to intervene to stop the renovation work following allegations against the temple authorities of “callously handling” the archaeologically important rock carvings. Dr. Prem Kumar said that the district authorities did not heed to the fax message from the department, which urged them to ensure the immediate stoppage of the ongoing renovation work at the temple. The work at last was stopped after a staff member from the department reached the spot to hand over a stop memo in person, he said. Work on replacing the old rock slabs ( Krishnashila ) fixed around the Chuttabalam of the temple was in progress for the last few days under the aegis of the Tali Devaswom. It was during the work by some unskilled labourers that the carvings, believed to be of medieval period, were noticed.

ROYAUME UNI – Cutacre - A "wealth of history" has been uncovered at the former Cutacre site, say archaeologists. Excavation of the site have revealed activity at the site, ranging from prehistoric round house, medieval ironworking and more modern coal mining.

Fort Frederick - Digging will focus on the fort, which was completed in 1734, and two sites where 19th-century buildings may have been located. Fort Frederick began as a British stronghold, built on the Beaufort River to protect the area from attacks by American Indians and by Spaniards from St. Augustine, Fla. It was used as a military base for less than two decades, was deserted by 1758 and replaced by Fort Lyttleton, a British tabby fort upriver on Spanish Point. The fort property was subsequently part of the Smith Plantation, or the Old Fort Plantation. The plantation was used by the 1st South Carolina Volunteers, a unit of former slaves, during the Civil War. Camp Saxton, now part of Beaufort Naval Hospital property, was the site of Emancipation Proclamation ceremonies Jan. 1, 1863. 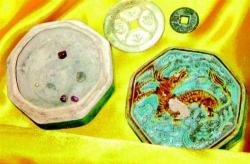 Xiangyang - Archaeologists have discovered five precious sariras, believed to be collected from the cremated ashes of Buddhist masters, at an ancient tomb in central China's Hubei Province. It is very rare to find sariras in a tomb, as they are usually unearthed at Buddhist temples, Chen Qianwan, head of the archaeology institute of Xiangyang City, said on Tuesday. The bead-shaped holy objects usually are kept in sacred containers. The most recent find was embedded on the top of a tomb belonging to an official from the Ming Dynasty (1368-1644) at the foot of the Xianshan Mountain in Xiangyang, according to Chen. The largest of the sariras has a diameter of about 3 centimeters. In the light, they vary in color from red, purple, blue, cyan and orange. The objects were found in late December and later identified by prestigious monks and researchers as sariras. They believe the owner of the tomb was a Buddhist. The findings will be kept in the city's museum.