Fukushima - Precise 3-D data on a tomb containing an ancient mural and situated about 3 kilometers from the wrecked Fukushima No. 1 nuclear power plant was being collected on Feb. 9-10. The Kiyotosakuoketsu tomb is in the difficult-to-return zone with high radiation levels due to the 2011 nuclear disaster, and the mapping is being done in preparation for future unforeseeable circumstances. A spiral pattern, animals including some people on horses and other objects are painted in red on a wall inside the tomb, which is well-known and represents northern Japan. Tohoku University, in collaboration with the town government of Futaba, is collecting the data on the government-designated historical heritage site, which dates to the seventh century. The data collected were on the tomb's exact shape and the artwork within. “We want to collect the accurate data as this is a valuable cultural asset,” said Atsushi Fujisawa, an archaeologist of Tohoku University Museum. Fujisawa and technicians from a land surveying company measured the tomb until Feb. 10 with a 3-D scanner while wearing protective clothing to prevent potentially damaging fungus spores from outside from entering the site. On part of the mural, some minerals have crystallized in white. A tree root hangs from the ceiling of the tomb.

Palmyre - Russia released drone footage Monday showing new destruction in Syria's historic town of Palmyra The video showed that the militants have badly damaged the facade of the Roman-era amphitheater and the Tetrapylon — a set of four monuments with four columns each at the center of the colonnaded road leading to the theater. The video appears to show that only two of the 16 columns remain standing.

EGYPTE – Vallée des Rois - The search for hidden rooms behind the painted walls of King Tutankhamun’s tomb will resume this month, with a new radar survey of his burial chamber. A team of Italian researchers from the Polytechnic University of Turin will use new radar technology capable of peering up to 10 meters into solid rock. An initial scan was initially met with excitement by Egypt’s ministry of antiquities. It revealed a ‘90 per cent chance’ there were further chambers yet to be discovered, officials declared. 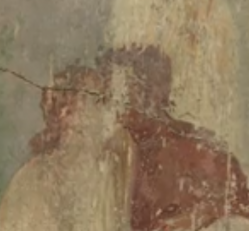