- BULGARIE – Sofia - The Bulgarian Archaeology 2010 exhibit was opened Monday in the National Archaeology Institute museum in Sofia showing finds from the past summer. 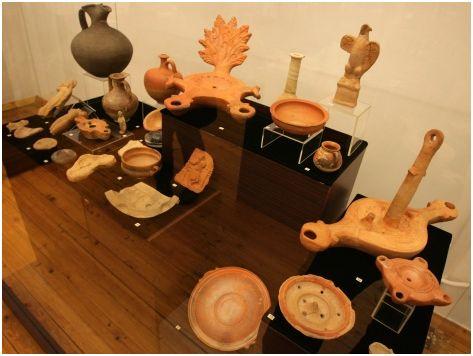 The finds include an golden earing featuring a two-headed eagle that belonged to a relative of Bulgarian Tsar Ivan Shishman from the late 14th century, and a seal ring with a griffin that belonged to Tsar Mihail Shishman, early 14th century. Both of these finds belong to the team of Professor Nikolay Ovcharov, aka "The Bulgarian Indiana Jones", who excavated the Ancient Thracian holy city of Perperikon in the Rhodope Mountains and the St. Peter and St. Paul monastery complex in Veliko Tarnovo, Bulgaria's late Middle Ages capital. One of the most exciting finds is a silver Arab coin from the 8th century found by Prof. Lyudmila Doncheva's team. The coin, found near the village of Topola in Eastern Bulgaria, is very important because it testifies to Bulgarians' defeat of the Arab invaders of Europe at the walls of Constantinople in 717-718 AD under the leadership of Khan Tervel (r. 700-721 AD). On 25 May 717, Leo III the Isaurian was crowned Emperor of Byzantium. During the summer of the same year the Arabs led by Maslama crossed the Dardanelles and besieged Constantinople with 200,000 men. Leo III made a plea to Tervel for help, relying on the treaty of 716 and Tervel agreed. In the summer of 718 the Arabs engaged the Bulgarians in a decisive battle but suffered a crushing defeat and had to abandon the siege. According to Theophanes, the Bulgarians slaughtered some 22,000 Arabs in the battle, while Zigebert accounts for 30,000. The Byzantine-Bulgarian victory of 718 and the victory of the Frankish king Charles Martel in the battle of Tours stopped the Muslim invasion in the interior of Europe. Khan Tervel was called the Saviour of Europe by his contemporaries. The necropolis excavated near the village of Topola contains countless graves from Bulgaria's pagan period before the late 9th century. Doncheva's teams found 52 new graves in 2010, with a total of 509 already excavated. The graves from the early period of the First Bulgarian Empire (681-1018) reveal a lot of pottery and other items demonstrating that the proto-Bulgarians who mixed with the Slavs after arriving to the Balkans in 680 AD were not nomads but a sedentary people. Over 50 other of the most exciting finds cover a time period from the Paleolithic Age to the Bulgarian Revival period (18th-19th century); these include bones of cave animals, ancient tools, and idols.

- CHINE – Raoshang - A handcraft workshop cluster dating back to the late Warring States Period (475 BC-221 BC) has been unearthed in northwest China's Shaanxi Province, archaeologists said Monday. Archaeologists have excavated a large amount of pottery items, porcelain tiles and ruins of kilns since April last year in the 3,000-square-meter Raoshang Site near Meixian County, which they thought was a handcraft workshop district that used to produce construction materials and porcelain articles for daily use for the ancient Meixian County. According to the archaeologists, the workshops had operated for more than 500 years through the late Eastern Han Dynasty (25 - 220).

- ROYAUME-UNI – Marden Henge - A building whose foundations were unearthed during an excavation at Marden Henge  (Wiltshire, England) last summer could have been a Neolithic sauna. Archaeologist Jim Leary said that the chalk foundations contained a sunken hearth that would have given out intense heat. "It brings to mind the sweat lodges found in North America," he said. "It could have been used as part of a purification ceremony." Also found was a midden or rubbish heap with dozens of pig bones, some still attached, likely to be the remains of a huge feast that took place 5,000 years ago. Mr Leary said Marden Henge is the biggest henge in England but because it did not have a stone circle associated with it, tended to be overlooked. Before Professor Geoffrey Wainwright examined its northern sector in 1969, it had not been investigated since the early 19th century. A huge mound, like a smaller version of Silbury Hill, named Hatfield Barrow, once existed there, but it collapsed after a shaft was dug through its centre and was levelled shortly afterwards.  The English Heritage team investigated that area as well as two sites further south, and it was at the area known as the Southern Circle that they made their most exciting discoveries. It was in the bank of this henge within a henge that they found the chalk floor.

Le Caire - The staff of the database department at the Egyptian Museum, Cairo have given me their report on the inventory of objects at the museum following the break in. Sadly, they have discovered objects are missing from the museum. The objects missing are as follows: -1.     Gilded wood statue of Tutankhamun being carried by a goddess  -2.     Gilded wood statue of Tutankhamun harpooning. Only the torso and upper limbs of the king are missing  - 3.     Limestone statue of Akhenaten holding an offering table   -4.     Statue of Nefertiti making offerings   -5.     Sandstone head of an Amarna princess   -6.     Stone statuette of a scribe from Amarna  - 7.     Wooden shabti statuettes from Yuya (11 pieces)   -8.     Heart Scarab of Yuya  .   An investigation has begun to search for the people who have taken these objects, and the police and army plan to follow up with the criminals already in custody. I have said if the Egyptian Museum is safe, than Egypt is safe. However, I am now concerned Egypt is not safe. In another terrible turn of events, last night a magazine in Dahshur was broken into; it is called De Morgan’s. This magazine contains large blocks and small artifacts.