Majiayao - Institute of Archaeology of Chinese Academy of Social Sciences and Gansu province's Archaeology Institute started for a second time a large-scale excavation covering an area of 500 square meters of Majiayao site in August. Majiayao culture existed from Late Neolithic period over 5,000 years ago in the upper Yellow River region in eastern Gansu and was first found by Swedish archaeologist Johan Gunnar Andersson in 1920s in a village called Majiayao 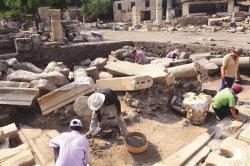 Stratonikeia - This year’s excavations at the ancient city of Stratonikeia, which is located in the western province of Muğla’s Yatağan district and on UNESCO’s tentative World Heritage Site list, have unearthed many Byzantine-era tombs. The ancient city is considered one of the world’s largest marble cities.  The head of the excavations, Pamukkale University Archaeology Department Professor Bilal Söğüt, said excavations in the ancient city had begun in 2008. He said work has been carried out under the inspection of experts from various fields such as research, conservation and restoration.  Söğüt said the 3,000-year-old ancient city had remains from each period of history. He said excavations in the Roman bath and Western Street were continuing this year and also the drawing and restoration project of the Seljuk bath would be finished this year.  The professor said they had reached all structures in the ancient city from the entrance gate to the emperors’ temple, from the Roman bath to the Turkish house.  “One of the most important gymnasiums of the ancient era is on the Western Street. Our goal was to unearth the street completely. But we have seen mass graves from the Byzantine era in the lower layers. We have found out that there is an early-era Byzantine church below the graves. This area was left after the church collapsed and began to be used as a graveyard,” Söğüt said.  He said salvage excavations continued in the area and they had so far opened 40 graves. “There is not only one person in the graves; some are mass graves and include damaged bones. We estimate that the number of graves will increase in the coming days,” he concluded.

Sierpc - Remains of the peripheral walls of the sixteenth-century castle in Sierpc (Mazowieckie province) have been discovered by researchers during archaeological and architectural research. Remnants of the castle are not visible on the ground. Only during extensive excavations that started in early July, archaeologists stumbled upon the several hundred years old walls. Field research was preceded by months-long query of available archival sources about the non-preserved stronghold. The researchers were able to determine that the brick stronghold was built by Castellan of Sierpc Prokop Sieprski, coat of arms Prawdzic, in the early sixteenth century. "So far, on the north bank of the river Sierpienica we have unveiled the remains of the outer walls built of stone and Gothic brick with a frog made with fingers, pavements associated with that oldest brick castle, and a flooring slab, which is a remnant of the hypocaust furnace, which was part of the heating system of the castle" - said Olszacki. In the second half of the sixteenth century, the stronghold was expanded by Potuliccy, coat of arms Grzymała. A vast house supported by buttress was built on the south side of the courtyard, heated ovens built with tile panels. "Soon after war destruction in the mid-seventeenth or early eighteenth century, this large, about 1,500 m2 private castle was demolished and completely forgotten. Our study sheds new light on its history" - added Olszacki. So far, archaeologists have excavated more than 5 thousand objects, including ceramic vessels, a large set late Renaissance tiles that once ornamented the furnace, skins and devotional medallion depicting Saints Benedict and Scholastica. The latter perhaps dates back to the presence of Benedictine Sisters in the castle in the 1st half of the seventeenth century.

EGYPTE - Tell Mutubis - A joint archaeological mission is nearing a possible discovery of ancient glass-making furnaces dating back to the late Roman era in northern Egypt. A mission by Mansoura University and Durham University has finished archaeological surveys in Tell Mutubis, Kafr al-Sheikh. The mission has discovered a number of limestone-tiled floors and walls of buildings covered with lute, in addition to a number of housing units and stores. Archaeological huge fences have been also found, said Minister of Antiquities Mamdouh al-Damaty. Head of the mission Penny Wilson said the team has conducted specialized studies on pots and glass utensils and corrosive currencies discovered at the site, which show that the site dated back to the Roman era.

ROYAUME UNI – Hilgay - A chance discovery in a mole hill has helped to prove that a series of lumps and bumps in a Hilgay field was actually once a wealthy Roman farmstead. A-level students joined members of West Norfolk and King’s Lynn Archaeology Society to survey the remains of the farmstead on land at Rose Farm on Sunday. Although the site, which is a listed scheduled monument, was discovered in the 1980s, this is the first survey to be completed for some time. But while the team were busy surveying the earthworks, they found some posh pottery within a mole hill. The discovery of the Samian pottery has proved that some of the people living at the site were quite wealthy. Dr Clive Bond said: “This pottery is made in Gaul and is a very important tableware. “The moles had gone into a dump area close to the mound and brought out this posh pottery. “This type of pottery is important as it shows the people who were living there were quite wealthy.”The site has a series of raised platforms which could have been used for animal pens, hay storage and buildings. The team on Sunday measured the rise and slope of the earthworks, which were found to be in very good condition. They also discovered flaked core fragments, a small flake and burnt flint during a walk along an adjacent field.

GRECE - Lambagiannas beach - A large underwater ancient Greek settlement of the 3rd millennium BC was brought to light by the Ephorate of Underwater Antiquities and the University of Geneva under the auspices of the Swiss School of Archaeology in Argolis, Peloponnese. The team looked for traces of prehistoric human activity on the eastern side of the Argolic Gulf. This year, the research began on July 13 and focused on Lambagiannas beach, where the team eventually located the prehistoric settlement. The settlement, located at a depth of 1m up to 3m, covers an area of around 3 acres. It used to be fortified and located by the seaside. Archaeologists found rectangular and circular building foundations as well as paved streets. Furthermore, they have located part of the settlement’s fortification and at least three large horseshoe-shaped foundations attached to the wall line (possibly part of the fortification that may have been towers). They also found numerous stone tools, obsidian blades and other artifacts. The investigation will continue until August 14, 2015, with geophysical research in the maritime area. 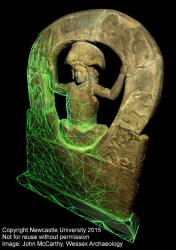 Hadrian’s Wall - Hadrian’s Wall World Heritage Site is one of Britain's most important and evocative archaeological monuments. It stretches right across the north of England and when it was built it marked the northern extent of the Roman empire. The purpose of this epic feat of engineering was to separate the Roman world from the barbarian world beyond the wall. A series of forts and milecastles were placed along the wall and over time these became as domestic as military, with civilian settlements growing up beside forts and numerous temples being constructed. An amazing array of altars, statues and other carvings have been found along the wall by archaeologists and many of these have been preserved within the collection of the Society of Antiquaries of Newcastle, now housed within the Great North Museum. We have scanned over 50 of these as part of our recent collaboration with University of Newcastle through the NU Digital Heritage project (nu-digitalheritage.com). For more information on the scans see http://www.wessexarch.co.uk/blogs/news/2015/03/03/laser-scan-GNM-no-5

KYRGYZSTAN - Issyk-Kul - More than 10 thousand artifacts are found during the international archeological expedition 2015 in Kyrgyzstan. According to the data, conducted in the Issyk-Kul Lake archaeological exploration allows you to raise the issue of revising the boundaries of ancient Kyrgyz principality that existed in this area during the Middle Ages. "In the course of archaeological exploration within a radius of 200 kilometers from the shore of the lake there were found new areas of petroglyphs, which, in fact, served as boundary markers. This allows making new assumptions about the boundaries of the Kyrgyz principality: perhaps its territory was more extensive than previously thought," the candidate of historical sciences, professor Boris Konikov states. It is clarifiesd that in 2015 the international archaeological expedition worked in Tuura-Suu village on the southern shore of Issyk-Kul. Scientists of the Russian Federation and the Kyrgyz Republic found more than 10,000 artifacts, "confirming the high status of ancient settlement existed here as one of the largest shopping, craft and religious centers of Karakhanid state." Most of the archaeological finds are armaments and everyday items. These are the elements of clay and bone utensils, iron weapons, stone jewelry, headstone sculptures. All findings are transported to Bishkek, the laboratory of Manas Kyrgyz-Turkish University for describing, organizing and detail study.