Nara - Japan has unveiled a rare discovery of ties between the then mighty empire of the East and people from the then Persia (now called Iran). Newly-found results of a research by the Nara National Research Institute for Cultural Properties on previously discovered objects reinforces the idea that at least one Persian man lived in the ancient city of Nara in the eighth century CE, IRNA reported on Tuesday. A team of Japanese researchers has succeeded to read the notes of an ancient wooden tablet, which dates back to 765 CE, using infrared imaging techniques, the news agency reported based on Japanese sources.  The tablet bears a name, attributed to a Persian man, who is believed to be an educator or trainee at the Japanese imperial court of the times. While it's long been accepted that Japan enjoyed trade connections with countries and cultures all along the Silk Road, records of these exchanges in ancient Japan are sparse and hard to come by, according to Japanese sources. “present-day Iran and Japan were known to have had direct trade links since at least the 7th century, but new testing on a piece of wood — first discovered in the ’60s — suggest broader ties.” At the time, wooden tablets (rather than paper) were commonly used for record-keeping. While the ancient city no longer exists, much of the remains of Heijo-kyo have been excavated over the past 70 years. Today, the area serves as a large civic park located just to the west of Nara's city center. It should come as no surprise that in the 8th century, someone from Persia would end up living and working in Japan, which was located at the end of the Silk Road. The route connected Japan with countries and regions far to the west, including Persia and the Byzantine Empire. Ancient Japanese culture incorporated a continuum of cultural influences from south and central Asia, as well as from Persia. Many deities and demigods in the Japanese Buddhist pantheon had their origins from other parts of Asia. This statue of an Asura, dating from the 12th century, is thought to have its origins in part from a similar ancient Persian deity. 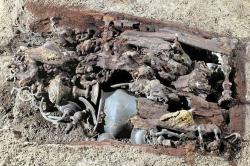 Wieliczka - Treasure has been discovered in a decaying box buried in a synagogue in Małopolska. Archaeologists working at the Old Synagogue in Wieliczka have found 350 valuable objects in a discovery that is being heralded as sensational. The archaeologists were digging a small test hole by a wall inside the synagogue when they noticed a fragment of a decayed wooden box, inside which were a collection of metal objects that had been tightly packed together, often one inside another. The treasure in the 80 cm high, 70 cm wide and 130 cm long crate includes a silver cup, five candlesticks, the parts for four or five brass chandeliers, two probably silver-plated candlesticks and two large brown vessels with decorative handles and Hebrew inscriptions, as well as cap badges of infantry officers of the Austro-Hungarian army. The objects probably come from the 19th century. The wooden planks that formed the box were preserved only in fragments, but the objects filling it tightly were in good condition. The next mystery is who buried the treasure. The Austro-Hungarian cap badges are a heavy indication that the synagogue fittings were not buried during World War Two.

CHINE – Pingliangtai  - Several wheel ruts dating back at least 4,200 years were found at a site in an ancient city in central China's Henan Province. The finding was released by the archaeological team of Pingliangtai Ancient City at a forum held by the Henan Provincial Institute of Cultural Heritage and Archaeology. The ruts were worn into roads near the south wall of Pingliangtai, which was found in 1980. Among the rutting traces, most are between 0.1 and 0.15 meters wide. The deepest point was 0.12 meters deep and the longest one was 3.3 meters long. One wheel rut also had two strips, with a spacing of 0.8 meters, thought to be a track of a kind of two-wheeled vehicle, archaeologists said. Previously, archaeologists have found several wheel ruts at the Erlitou Relics in Yanshi, Henan, making the history of Chinese vehicles about 3,700 years old. Based on the existing archaeological data, it is still unclear what the earliest vehicle in China was like. "So the discovery of these new ruts is of great academic value to study the invention of Chinese vehicle wheels and the origin of vehicles," said Qin Ling, head of the Pingliangtai archaeological team. 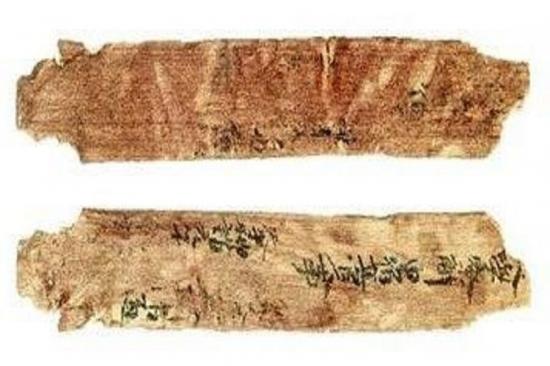 Dambovita - An amateur with a metal detector has discovered a trove of almost 1,000 silver medieval coins from different countries believed to have been minted between 1500-1600 which were buried in a field in the southern county of Dambovita. News.ro reported that the 980 coins are of Spanish, Romania, Polish and Turkish origin and date back to the 16th century. The field where they were found_ halfway between the capital Bucharest and the town of Targoviste _ is not on a known archaeologic site.