Borneo - 31,000-year-old remains recovered from a limestone cave in a remote region of the Indonesian portion of the island of Borneo bear evidence of surgical limb amputation. When the bones were unearthed by Tim Maloney of Griffith University, India Ella Dilkes-Hall of the University of Western Australia, and Andika Priyatno of Balai Pelestarian Cagar Budaya, they noticed that the left foot and lower leg were missing. When paleopathologist Melandri Vlok of the University of Sydney examined the remains, she confirmed the presence of bony growths related to healing on the end of the shortened limb. The healing of such a wound and the child’s survival as a hunter-gatherer for several years in mountainous terrain would have required a high degree of community care, Vlok said. The foragers may have even had knowledge of the use of tropical plants as anesthetics, antiseptics, and other wound-healing treatments, added Dilkes-Hall. It had been previously thought that the anatomical and surgical knowledge necessary for the successful amputation of diseased or damaged limbs did not begin to develop until people began farming and living in permanent settlements, Maloney concluded. Read the original scholarly article about this research in Nature. 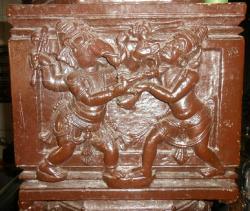 Macharla - A rare sculpture of Ganesha in fighting posture has been found at the Chennakesava Swamy temple at Macharla town in Palnadu district. “This is an unusual Ganesha sculpture carved on the central part of the Rangamandapa pillar. The  panel is delineated with the narrative of Durasadavadha( killing of Durasada, a devil) in which Ganesha kills the devil after a tough fight as mentioned in Ganesha Purana. Unlike the Ganesha images generally seen seated in Lalitasana ,  this Ganesha image holding Parasu (battle axe), Ankusa (goad) in two hands and fighting the devil with another two hands is standing in Alidhasana,” says Dr. Siva Nagireddy. While stating that it is one of its kind posture, Dr. Siva Nagi Reddy says that two more similar and contemporary sculptures of Ganesha engaged in killing the devil Durasada are found at the 12th century Pachchala Someswara temple,Pangal in Nalgonda district and the Rama temple,Sattenapalli in Palnadu district. 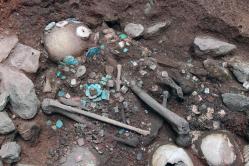 Pacopampa - A 3,000-year-old tomb has been found in northern Peru’s Pacopampa archaeological site by archaeologist Yuji Seki. Pacopampa consists of a large ceremonial center constructed of cut and polished stone, and is known for the tomb of the so-called Lady of Pacopampa, who is thought to have been buried around 700 B.C., before the construction of the temple at the site. The newly discovered burial contains the remains of a man, musical instruments, and shells of large sea snails that lived in waters off the coast of Ecuador. “They were brought from a faraway place,” Seki said. “It could mean this person had a quite important religious power back then.” 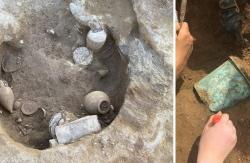 Toscane - The site was discovered in 2017 during a construction project, revealing a settlement and associated burials, which was investigated by researchers at the time but never published.The settlement is one of few Etruscan sites untouched by looters in antiquity or modernity, allowing researchers to analyse grave goods that are relatively intact, and further understand the distinct Etruscan burial rituals. According to researchers, the entrenched and distinct characteristics of the Etruscan population survived in the presence of the dominant Roman power and its associated law. The Etruscan traditions continued for over two centuries following the Roman conquest, shaping the local area with a fusion of both civilisation’s social, cultural, and economic habits, until the area was devastated during the Social War between the Roman Republic and several of its autonomous allies (socii) in Italy.“These findings show us how we should speak more of cultural and social osmosis rather than a subordination of one population to another,” says Alessandro Sebastiani, the paper’s author and assistant professor in the Department of Classics. “The analysis reveals the interesting and sophisticated relationship between the Etruscans and the Romans, where the Etruscan communities are both surviving and adapting themselves into the Roman world.”“We opened three Late Etruscan tombs that were totally intact, which sheds new light on the societal representation of the families living and working in the village,” Sebastiani says. “Because these sites have been looted for gold, it’s quite rare to find one untouched, with all of the grave goods present after more than 2,200 years, including gold earrings, gold crowns, bronze rings with the representation of Hercules, iron strigils (a tool for cleaning the body) and fine pottery. “The project is providing new pieces to the intricate puzzle of historical settlements in Etruria during the transitional period of the Roman conquest, their development into the imperial political system, the long late antiquity, and the rise of medieval society”, says Sebastiani.

ARABIE SAOUDITE / IRAQ - Archaeologists from Oxford University may have discovered evidence of prehistoric hunting structures throughout areas of northern Saudi Arabia and southern Iraq that were not previously unknown. The peer-reviewed research was first published last month in The Holocene, where archaeologists used satellite imagery from remote sensing analysis by Endangered Archaeology in the Middle East and North Africa (EAMENA) to determine the structures. Researchers concluded that the new data "has important implications on the environmental viability of hunting and on possible settlement patterns during the early and middle Holocene." The research has also identified star-shaped kites: "large stone-built features that are widely accepted to have functioned as a type of hunting trap," which were recorded being distributed through southern Syria and eastern Jordan. About 6,000 of them have been reported to date, and the Oxford remote sensing survey found over 300 new ones. So what did prehistoric people hunt using the kites? Hunting targets of the kites include "gazelles, ostrich, hartebeest, Arabian Oryx and onager," according to the study, as they're able to operate as a wild game drive or hunting trap. Many gazelles were successfully captured and hunted using the kites, the report stated."The structures we found displayed evidence of complex, careful design. In terms of size, the ‘heads’ of the kites can be over 100 meters wide, but the guiding walls (the ’strings’ of the kite) which we currently think gazelle and other game would follow to the kite heads can be incredibly long," said Dr. Frandley, the head researcher of this initiative. "In some of these new examples, the surviving portion of walls run in almost straight lines for over four kilometers, often over very varied topography. This shows an incredible level of ability in how these structures were designed and built."Archaeological excavations showed how the kites were able to trap wild game to be slaughtered. Pits were found that were several meters deep, which would have allowed hunter-gatherers to trap animals.  The structures are said to date as far back as 8,000 BCE during the Neolithic Period. Saqqara - An Egyptian archaeological mission working in Giza’s prominent Saqqara necropolis has unearthed several blocks of white cheese dating back to the 26th dynasty of ancient Egypt (664–525 BC). According to the statement, the mission unearthed a number of clay receptacles containing the cheese, inscribed with Demotic script. The mission reportedly found a number of other containers that are expected to be opened in the coming days. Hattusa - It is aimed to reach new information about the traditions of the Hittite civilization with 249 new hieroglyphs discovered in the Yerkapı Tunnel in Hattusa the capital of the Hittites. During the excavations carried out by archaeologists, Hittitologists, and scientists from different fields of expertise from different countries and universities, new symbols, estimated to have been drawn about 3,500 years ago, were found in the Yerkapı Tunnel, which was built using thousands of stones. The Turkish word Yerkapı, which means “the gate in the ground,” perfectly describes this section of Hattusha fortifications. It is situated within an artificial embankment that serves as the southernmost point of the city walls. At its base, the embankment is 15 meters high, 250 meters long, and 80 meters wide. Schachner said that scientists from different specialties continue to examine the 249 hieroglyphs, which are considered to be depictions of gods. Schachner pointed out that with the newly found hieroglyphs, they will have the opportunity to better understand what the tunnel was used for. While some of the markings are too worn to be read, most are well preserved and clearly legible. Schachner said, “When we share the symbols with the scientific world, our colleagues working on the Hittites will have an opinion and maybe one or maybe several ideas will emerge accordingly. We have identified a total of 249 Anatolian hieroglyphs here, but they are not all different from each other. We can divide them into 8 groups in total. They add innovation to us socially. Since they are written with paint, we need to interpret them more in the style of graffiti. Nové Jičín - The discovery was made this summer during a dig at Nové Jičín, a town in the eastern section of the country. During the excavation of a house, archaeologists searched an area that was once a courtyard from the early modern era. Here they found the stone foundations of an older building followed by the remains of a charred wooden floor. This led them to a well-preserved brick oven with a raised hearth and an iron grate that had been deformed by fire. More artefacts were soon uncovered, including kitchen utensils, a wooden spoon and unbroken ceramic dishes that still had their lids. In addition to the obvious evidence of kitchen operation, other medieval artefacts were also found on the wooden floor, including a considerable number of glass rings that were probably part of a woman’s necklace, a hanging bolt spring lock from a door or chest, a three-pronged pitchfork and a spearhead. Not much is known about the medieval settlement at Nové Jičín, but the archaeologists believe that this house was probably destroyed by fire in the 15th century, maybe during the Hussite wars.