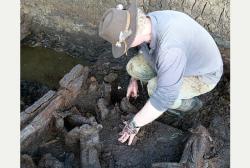 Glastonbury - No other prehistoric site in England has the level of preservation of this site and 2,000 years after they were laid by Iron Age builders the wooden walls and floors from this internationally renowned Lake Village have been brought into the light of day again. he new work provides further informatiom on what survives and at what depth, and how much shrinking and drying out has occurred. Tree ring and radiocarbon dating techniques not available to the original excavators are also being used on samples of wood to solve the questions of when, and for how long, the village was occupied. Fragments of pottery, spinning whorls and evidence of bronze casting and iron smelting and carpentry were found at the site in the past, along with evidence of the residents' diet. 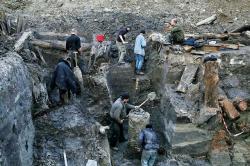 Kiev - When archaeologists performed a routine check on a construction site in central Kyiv in late February, they were astonished to discover a medieval street hidden seven meters underground. The remains of the wooden buildings that date back to Kyivan Rus were found at the mall construction site at Poshtova Square in the Podil neighborhood near the Dnipro River. “Podil is very well studied, which is why everyone was very surprised when we first saw the fragments of the 12th century wooden fence and house," says Ivan Zotsenko, one of the archaeologists working on the spot.  During the past three weeks, the team of nine archaeologists dug out several wooden fences, the foundation of a wooden house, coins, beads, pots and one amphora – all estimated to date back to the 11th-13th centuries. “It looks like we dug out a fragment of a densely populated medieval street," says Zotsenko. “These findings demonstrate that people lived on the bank of Dnipro River already during Kyivan Rus times. It means that Kyiv territory was bigger than we used to think."  Earlier, historians believed that the borders of ancient Kyiv ended on the modern Borychiv Tik Street, some 500 meters inland from Poshtova Ploshcha.  “The main value of this archaeological finding is that the medieval Kyiv borders have become more clear," says Zotsenko. In the 18th-19th centuries, there was a wharf on the modern Poshtova Square, so when the researchers began the check in December, they didn't expect to find anything other than fragments of pavement or household items from that era. 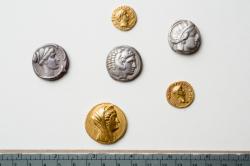 - University at Buffalo faculty member Philip Kiernan, who heard a rumor from a UB alumnus in 2010 that the UB Libraries housed the rare coins. Three years later, Kiernan, an assistant professor of classics, channeled his inner Indiana Jones and journeyed to the depths of the UB archives to find them. The collection, he was shocked to learn, was real: 40 silver Greek coins, three gold Greek coins and a dozen gold Roman coins -- one from each era of the first 12 Roman emperors, from Julius Caesar to Domitian. They range in date from the fifth century B.C. to the late first century A.D. Within the collection is a "remarkably rare" coin of Roman emperor Otho, who reigned for a mere three months. The Greek coins were struck by some of the most powerful city-states and rulers of the ancient world, such as Athens, Corinth and Alexander the Great. The coins were donated in 1935 to the UB Libraries Special Collections by Thomas B. Lockwood as part of a larger collection of rare books. However, it wasn't until Kiernan examined them out of curiosity that the currency's rarity and value were realized.

cave 'Aurea' -Prehistoric cave drawings have been discovered in the northern region of Cantabria, dating back about 20,000 years. The discovery is the first time that Paleolithic art had been found in the immediate area, the government of Cantabria said in a statement on Thursday.The art was discovered in the cave 'Aurea', located 50 metres above the river Deva, by the president of a caving club and his wife, La Razón reported. The cave drawings include what appears to be a reoccurring sign, consisting of a red vertical line and dots and appearing at different locations within the cave. Some paintings appear to be draw by fingertip while others appear to be made by blowing paint onto the wall. 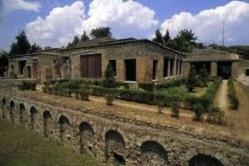 Pompei - Pompeii's biggest house, the Villa of the Mysteries, is set to reopen in its entirety on March 20, following nearly two years of restoration work that began in May 2013.  The Villa was first discovered in excavations in 1909 and was exceptionally well-preserved despite the eruption of Vesuvius in 79 A.D., which covered it in a layer of over 30 feet of volcanic ash.The recent restoration work, which involved 70 rooms of the Villa, corrected some of the damage inflicted by previous restoration techniques that were found to be harmful to the Villa's frescoes over the years.In work done during the 1930s, wax was applied to preserve the frescoes, but ultimately faded the colors, something that was corrected using techniques to first identify the nature of the chromatic alterations and other damage over time and then perform restorations.In addition to work done to restore the Villa's frescoes, the most famous of which is the Dionysiac frieze​ portraying the mysteries of the Cult of Dionysus from which the Villa takes its name, work was also done to clean the intricate mosaic floor decorations.
http://www.ansa.it/english/news/lifestyle/arts/2015/03/13/pompeiis-villa-of-the-mysteries-reopens_3488f14c-a619-475a-9f29-38284260f3a8.html? 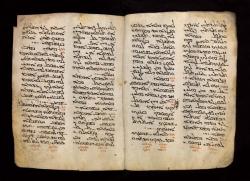 Mosul - The Islamic State (Isis) has burned a total of 1,500 ancient manuscripts in Iraq and looted Assyrian sculptures then sold them on the black market, the country's undersecretary of the minister of tourism Qais Hussein Rashid reported.He said that IS blew up the shrine of Ibn al-Atheer after the occupation of Mosul and the shrine of the Prophet Yunus, and a total of 1,500 old manuscripts were torched by IS fighters.