Peloponnese - Archaeologists may have discovered the oldest known extract of Homer's epic poem The Odyssey. Engraved with 13 verses, the ancient tablet has been unearthed in southern Greece in what is possibly the earliest-recorded trace of the poem, the Culture Ministry said. The clay slab is believed to date back to the third century during the Roman era. The extract of this seminal work, taken from book 14, describes the return of Ulysses to his home island of Ithaca. "If this date is confirmed, the tablet could be the oldest written record of Homer's work ever discovered," in Greece, a ministry statement said. The tablet was discovered after three years of surface excavations by the Greek Archaeological Services in cooperation with the German Institute of Archaeology. It was found close to the remains of the Temple of Zeus at the cradle of the Olympic Games in western Peloponnese. The plaque is "a great archaeological, epigraphic, literary and historical exhibit," the ministry said. First composed orally around the 8th century BC, the epic — which is attributed to ancient Greek author Homer — was later transcribed during the Christian era onto parchment of which only a few fragments have been discovered in Egypt. It was probably handed down in oral tradition for hundreds of years before first being written down. The Odyssey is a Greek poem that tells of the return journey of Odysseus to the island of Ithaca after the war at Troy. The war lasted 10 years and Odysseus spent an additional 10 years trying to get home in the face of difficulties from Poseidon, god of the earth and sea.

Teopanzolco - Archaeologists scanning a Mexican pyramid for damage following September's devastating earthquake have uncovered traces of an ancient temple. The temple is nestled inside the Teopanzolco pyramid in Morelos state, 70km (43 miles) south of Mexico City. It is thought to date back to 1150 and to belong to the Tlahuica culture, one of the Aztec peoples living in central Mexico.,The structure is dedicated to Tláloc, the Aztec rain god. Archaeologists say it would have measured 6m by 4m (20ft by 13ft). Among the temple's remains they also found an incense burner and ceramic shards. Archaeologist Barbara Koniecza said the 7.1-magnitude earthquake which hit Mexico in September caused considerable damage to Teopanzolco, in particular to two temples "The pyramid suffered considerable rearrangement of the core of its structure," Ms Koniecza said.,Research suggests that the Tlahuica lived in dozens of small city-states in the area of modern-day Morelos state. The main structures at the archaeological site of Teopanzolco are thought to date back to the 13th Century, which means that the newly discovered temple would have predated them.,Ms Koniecza says it was not unusual for the Tlahuica to build on top of older structures.

Petrykiv - An ancient man and woman have been found locked in a loving embrace for 3,000 years in a grave in Ukraine. Archaeologists believe the woman was willingly entombed alive in order to accompany her husband to the next world.The extraordinary burial sees the couple clasped together since the Bronze Age. The pair, from the prehistoric Vysotskaya - or Wysocko - Culture were found near Petrykiv village, south of the city of Ternopil in western Ukraine. Professor Mykola Bandrivsky - who conducted a study of ‘loving couple burials’ - said: “It is a unique burial, a man and a woman lying there, hugging each other tight. Both faces were gazing at each other, their foreheads were touching.,“The woman was lying on her back, with her right arm she was tenderly hugging the man, her wrist lying on his right shoulder. “The legs of the woman were bent at the knees - lying on the top of the men’s stretched legs. “Both the dead humans were clad in bronze decorations, and near the heads was placed some pottery items - a bowl, a jar and three bailers.” This ancient culture was known for the “tenderness” of its burials, said Dr Bandrivsky, Director of the Transcarpathian branch of the Rescue Archaeological Service of the Institute of Archeology of Ukraine. But this example is very striking as autopsy experts say it would not be possible to place the woman’s body in such a loving position if she was already dead. The experts say it is likely the woman chose to die and be buried with her husband and drank poison as she climbed into the grave and embraced her recently dead husband. In other cases, burials from this culture have revealed “a man holding the hands of a woman, the lips of a man touching forehead of a woman, or arms of both dead people hugging each other”. Dr Bandrovsky - who has carried out an analysis of such burials - said: “From our point of view, this women did it voluntarily. “Maybe, the woman did not want to live with some other man, and get used to some new way of life. “So she preferred to pass away with her husband. “We suppose such a decision was dictated only by her own desire, and her attempt to stay with her beloved one.” He added: “She may, for example, have drunk a chalice of poison to make joining her husband easy and painless.” Marriage was well developed in the Vysotskaya Culture, with husbands and wives having clearly defined responsibilities, he said. A tenet of their beliefs was the idea that thew woman preferred to die with her man.

The discovery in Gibraltar of bones belonging to two species of whales has led experts to believe that they once inhabited the Mediterranean Sea until being driven to extinction by the Romans around 2,000 years ago. The remains were discovered by archaeologists from the University of York.North Atlantic Right and Grey whales are native to both the Atlantic and Pacific oceans and may once have also migrated to the shallower, warmer waters of the Mediterranean to breed and calve. The Atlantic coasts of Spain and Portugal have long been known to have hosted largescale fishing industries in the Roman period, with the salting of fish being a major industry of the region. The discovery suggests however, that a whaling industry also existed in antiquity. The Romans have also been blamed for the extinction of many large land-mammals such as European bears and lions which were captured and killed en-masse for entertainment in the arenas. The relatively small size of the two whale species and their tendency to venture close to land would have made them easier targets for ancient mariners than larger open ocean-going mammals.

EGYPTE - Abu Qurqas - Egyptian authorities have discovered an ancient Christian necropolis from the Greco-Roman era which they say could be part of an undiscovered city, after arresting a gang that excavated the site in southern Egypt's Minya on Wednesday. The necropolis was not registered as an archaeological area which is why there was no security to guard it, Mostafa al-Waziri, secretary-general of the High Antiquities Council, said. According to Waziri, the tombs date back to an era when Christians fled to southern Egypt from the main cities to escape repression, until they were recognised as an official religious group in AD 312. The tomb may be part of an undiscovered city, he added. During the Greco-Roman period people buried their dead outside city limits, for sanitary and religious purposes. “The thieves uncovered an entire archaeological city dating back to the Greco-Roman era, with many rock-carved tombs extending to about 2 km by 600 meters, as well as columns and a Greco-Roman church with a niche and two columns and a cross,” Salah said. The security report released by the interior ministry said the discovery included a 100-meter church with frescoes on walls and tombs on three levels. The site dates back to the second, third and fourth centuries, the report said.

Alexandrie - Archaeologists are preparing to open a large black granite sarcophagus unearthed in the Egyptian port city of Alexandria. At almost two metres high and three metres in length, the sarcophagus is the largest of its kind to be discovered intact in the ancient city. It was found alongside a large alabaster head believed to represent the inhabitant of the tomb, which had remained untouched for thousands of years. The sarcophagus, discovered during construction work, has become a source of excitement for archaeologists because a layer of mortar between the body and the lid indicates its contents have lain undisturbed since it was buried. It is believed to be from the early Ptolemaic period, which began after the death of Alexander the Great in 323BC. “We are hoping this tomb may belong to one of the high dignitaries of the period,” said Ayman Ashmawy, the head of ancient Egyptian artefacts at the Egypt’s ministry of antiquities. “The alabaster head is likely that of a nobleman in Alexandria. When we open the sarcophagus, we hope to find objects inside that are intact, which will help us to identify this person and their position.” But opening it for the first time will require extensive work to be done in advance. “It’s risky to open it directly – we need to prepare,” said Ashmawy, explaining that the sarcophagus would be opened on site. “It’s difficult to move it intact and open [it] in a museum,” he said. “It’s five metres underground and the whole thing weighs over 30 tonnes. The lid alone is 15 tonnes.” 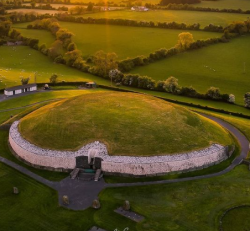 Newgrange - The first research excavations at Newgrange in Co. Meath in over 30 years have begun, after a geophysical survey showed what could prove to be an 'extraordinary monument. The find at the world heritage site has been described as 'the most definite, complex and ordered feature ever seen in a geophysical survey in Ireland, according to noted archaeologist Matthew Stout who is leading the dig. The four-week excavations started last week and it may be another week before the team of 18 archaeologists uncover anything of real significance. The survey was conducted in 2015 by Joanna Leigh to investigate the feasibility of renovating the old tourist office at Newgrange and clearly identified the substantial site at the back of Newgrange Farm. It suggests numerous large pits, forming two parallel sets extending over 75m indicating an ancient processional way to Newgrange. The entrance way and perpendicular pits form a passage or corridor, which ends precisely due south of the entrance Newgrange Passage tomb. Ms Leigh has speculated that the site is therefore associated with the passage tombs and is ritual in nature