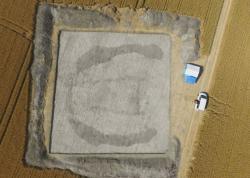 Pewsey Vale - A Neolithic burial mound near Stonehenge could contain human remains more than 5,000 years old, experts say. The monument in a place known as Cat's Brain in Pewsey Vale, halfway between Avebury and Stonehenge in Wiltshire, was identified in aerial photographs. Archaeologists and students from the University of Reading are due to excavate the site. The site is made up of two ditches and an apparent central building, which may have been covered by a mound, that has now been flattened due to centuries of ploughing. The site, in the middle of a farmer's field, was assessed in a geophysical survey. It is believed it could contain human remains buried there in about 3,600 BC. Dr Jim Leary, director of the university's archaeology field school, said: "Opportunities to fully investigate long barrows are virtually unknown in recent times and this represents a fantastic chance to carefully excavate one using the very latest techniques and technology. "Discovering the buried remains of what could be the ancestors of those who built Stonehenge would be the cherry on the cake of an amazing project." 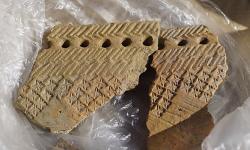 Salekhard 4  - Fragments of pottery and traces of burial pits were found during digging at the Salekhard 4 archaeological landmark site located in the mouth of the Polui River a few kilometers away from the city of Salekhard, Yamal-Nenets Autonomous Area, the local authorities' official website reports. Archaeologists digging in an area of 120 square meters have found fragments of the 2nd-7th century pottery and vessels belonging to the Karym and Zelyonaya Gorka periods of Lower Ob culture, as well as some artifacts dating back to the Bronze Age and the build-up of slag. Judging by the finds, local people were involved in smelting metal. Also, archaeologists found two earth patches at the site designating burial grounds. "The burial grounds were hidden under wooden boards," said Olga Tupakhina, PhD in history, head of the field work and senior researcher at the archaeology section, Arctic Research Centre. "We can tentatively estimate that they may belong to the Karym period of Lower Ob culture. It's interesting that a stone is installed approximately at the center of each burial ground." Scientists have yet to determine what role the stones played in the rites of ancient hunters and fishermen. Archaeologists Andrei Gusev and Olga Tupakhina discovered the archaeological Salekhard 4 landmark in 2009. The fragments of ceramic pots dating back to the Bronze Age and the Middle Ages and one stone piece from the Bronze Age found by the scientists led them to believe that there were settlements at this location at different times. This is the first time that the area has become the subject of considerable archaeological interest. http://arctic.ru/diary/20170711/645989.html

Alexandrie - Greek archaeologist Kalliopi Papakostas has unearthed ancient buildings and a bridge in the Shalallat Gardens area in Alexandria, Egypt. Excavations in the area had started 21 years ago and now archaeologists have discovered a long carved tunnel that sheds new light to the huge ancient building that has been found so far, Athens Macedonia News Agency reports. The 2015 findings by the Hellenic Institute for the Research of Alexandrian Culture, headed by Papakostas include a large public building from the Ptolemaic period. as well as a carved tunnel at a depth of 10 meters. “This is a significant discovery because the site belongs to the Royal Quarters of the Ptolemae and we have informations about these buildings from the ancient times,” she told AMNA. Hellenic Research Institute of the Alexandrian Civilization (H.R.I.A.C) is holding an archaeological research and excavation in Shallalat Gardens, in the center of Alexandria. In the topography of the ancient city,this site was located in the Royal Quarter of the Ptolemaic dynasty. After conducting geophysical survey, three targets have been indicated and during the excavations, there is a lot of evidence of human constructions. There are also finds of pottery, coins, mosaics etc. But the most important discovery is a unique hellenistic marble statue of Alexander the Great, which is already exhibited in the National Museum of Alexandria. During the spring 2012 excavation season,the research was concetrated on the exploration and documentation of a complex of glass workshop and warehouse above the area that the statue was found.

Liff's Low bowl barrow  - The face of a man who died in England around 4,500 years ago has been reconstructed, revealing a "striking" image that should help humans alive today feel a personal connection, researchers said. The man's remains were excavated in the 1930s and 1980s at Liff's Low bowl barrow, a burial mound located in Derbyshire, England. He was found buried with a type of pot called a beaker and a stone pendant that was likely worn on a necklace, the researchers said. Anthropological analysis done in the 1980s found that the man was about 5 feet, 7 inches (1.7 meters) tall and was between the ages of 25 and 30 when he died, said Claire Miles, a collections assistant at the Buxton Museum. The anthropologists at the time found that the man had a fracture in his left elbow that had "healed poorly," Miles said, noting that the cause of the man's death is unknown. 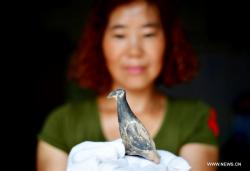 Xinzhai - Carbon dating has recently confirmed the age of a 3,800-year-old red pottery bird statue, unearthed in central China's Henan Province. The statue, 16 cm long and 7 cm tall, was painted red with cinnabar, which suggests it may have been an item of worship, according to archeologists.The item was found at the ruins of the city of Xinzhai, discovered in 1979 and believed to be founded by Qi, king during the Xia Dynasty, as early as 2050 BC. Zhao Chunqing, from the Chinese Academy of Social Sciences, said the statue indicates totemistic bird worshiping in prehistoric China. A large number of pottery utensils and stone tools have been discovered in the same pit, as well as an urn decorated with a leaf design and a cone-shaped tripod with pierced decoration. According to historical documents about the Xia, believed to be China's first dynasty, Qi's son Taikang lost power and was driven out of the city by tribal leader Houyi, who was later defeated by another tribe leader Hanzhuo. Geng Guangxiang, an archeologist working on the Xinzhai project, said previous research suggested that both of these tribes worshipped bird totems, therefore the statue may have come from that period.He added that Xinzhai continued to serve as the capital during the power struggles until Qi's descendant Shaokang took control of the Dynasty.