Achtriachtan, Achnacon, Inverrigan - Archaeologists are seeking to trace the lost settlements of the Glencoe Massacre for the first time. A probe has been launched to find three hamlets which dissappar from historical records in the wake of the infamous murder of 38 members of the MacDonald clan by the troops of Robert Campbell of Glenlyon.  The National Trust of Scotland has carried out initial survey work at the three settlements of Achtriachtan, Achnacon and Inverrigan,with more detailed studies due to follow. The massacre was carried out after the clan chief of the MacDonalds failed to meet a deadline to pledge allegiance to King William II. The killings were regarded as especially heinous as the soldiers had enjoyed days of Highland hospitality before turning on their hosts and attacking at daybreak. Derek Alexander, Head of Archaeology at the Trust, who was speaking ahead of the anniversary of the 1692 massacre tomorrow, said the work would enrich the understanding of the cultural heritage of the glen. Mr Alexander said: "We can see there are eight buildings at Achtriachtan and the same again at Achnacon."There might even be evidence of an inn. You are looking at between 40 to 50 or 60 people living in the one settlement. "We know 30 were killed during the massacre but we don't know how many died getting away. It was at Achnacon that Sergeant Robert Barber gathered his men in the early morning of 13 February, 1692, some time before 5am, and ordered the kill. The soldiers then marched through the townships, with Barber taking 18 men to the home of his host, MacDonald of Achnacon.Musket shots were fired through the windows, according to author John Prebble's book on the massacre, with the host's brother instantly killed. Achnacon managed to escape after being dragged outside. Meanwhile, 14 people were reportedly burned to death in one cottage. Mr Alexander said the remains found at the three sites were probably turf and stone homes. 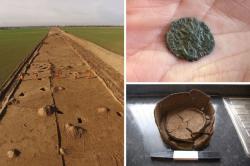 Lincolnshire - Almost 30,000 archaeological finds including human medieval and Roman burials have been made as part of a project to build the world's largest offshore wind farm. They have led to discoveries including two Iron Age settlement sites, three Romano-British settlement sites, two medieval moated sites and evidence of prehistoric farming activity. Coins, pottery, animal bone and marine and freshwater shells were also among the finds. "Work has included excavation of two Iron Age settlement sites in North Killingholme, prehistoric farming activity and a Romano-British settlement in Stallingborough, Romano-British settlement sites in Tetney and Holton le Clay, and medieval moated sites in Habrough and South Killingholme. "One of the more interesting finds was a medieval burial found near Killingholme. The individual was not buried at the medieval hospital or cemetery which we know existed three miles to the north west. The body was actually found in the upper level of a field boundary, on the outside of a moated enclosure." Key finds from the scheme have included:

• Two human burials (one medieval and one Roman) near Killingholme

• An array of finds predominantly pottery and animal bone, but also metalwork (coins, fragmented brooches, a ferrous knife and nails) and quernstones. • Marine and fresh water shells were commonly found; oysters seem to have been a particular favourite in Tetney during the Roman period

• Evidence of an unexpected Anglo-Saxon settlement in Laceby with finds from the site including a decorated worked bone comb, worked bone pins and spindlewhorls

INDE - Tikoda, Damdongari - Village Narvar and its surrounding area of Raisen district has got special place in Indian pre-historic period. Evidences related with 15 lakh years ago, that is pre-historic period, have been found in Tikoda and Damdongari area. Archaeological Commissioner Anupam Rajan informed in this regard that the evidences have come to light after excavation carried out by retired director general of Archaeological Survey of India SV Ota in six years from 2010 to 2015. The Archaeological commissioner said that Dr Ota delivered a lecture on 'Geo Archaeological Investigation of Acheulean Localities and Tikoda and Damdongari Raisen district’ at Vishnu Shridhar Vakankar Archaeological Research Institute of State Museum on Saturday. Giving details of the archaeological and historical facts in the area, Rajan said that stone tools found in lower level of Tikoda village, are similar to the one found in Oldowan culture of Africa. Information related with climate under which human at that time live, his lifestyle, foods and information about other activities, have been found in sample of soil and stone tools. Pieces of egg shells of ostrich have also found in this excavation.Man-made stone tools like Hast Kuthar, Vidarani, Kucharni and other tools are the main thing found there. Effects of pre-historic period have been found in different excavation parts from one metre to 9.5 metre at these places. All archaeological evidences confirm that this area was the centre of human activities lakhs of years ago. 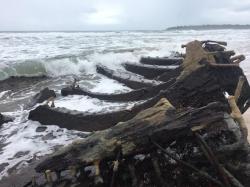 Punta Uva - Specialists who have been working to identify remnants of shipwrecks in Costa Rica’s Southern Caribbean say that a ship’s hull brought ashore by the tides this weekend at Punta Uva could belong to the Daisy Gray, built in 1936. The Ambassadors of the Sea Community Diving Center (Centro Comunitario de Buceo Embajadores y Embajadoras del Mar) said in an email statement that the ship was abandoned in 1954 when was en route to Cuba from Honduras. Archaeological diver Gloriana Brenes had found parts of the shipwreck last year as seen in this video, but the hull was floating throughout the area and disappeared, the email said. The piece of the hull that washed up this week is approximately 12 meters long. 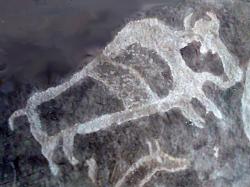 Colorado - Buffalo jumps — sites where Indians chased animals over cliffs so they could gather meat, hides and other parts of the creatures — are well known in the archaeology of the West. In the mountains of western Colorado, however, buffalo jumps were rare. Instead, native people employed another technique for trapping and killing bison, the animals commonly called buffalo in North America. "The hunters would force bison up a steep draw," said Holly "Sonny" Shelton, project archaeologist for the Western Colorado Bison Project, which was conducted under the auspices of the Dominquez Archaeological Research Group. Because it's difficult for bison to raise their heads high, Shelton explained, they don't like climbing up steep trails. So they would try to turn around and exit the draw. But hunters would be waiting at the bottom to kill them. "You couldn't hunt deer or elk like that" because those animals would simply race to the top and escape, she added. "But it seemed to work for bison because people used it over many centuries." The hunting method was employed before Indians had horses, Shelton's research showed, and continued into the 1800s, well after horses arrived on the scene. Bison bones found at the bottom of such draws — often with marks showing evidence of human activity, or "cultural modification" — helped Shelton determine the hunting technique. Bison rock art that was found frequently at or near these natural bison traps bolstered the idea about the hunting method.