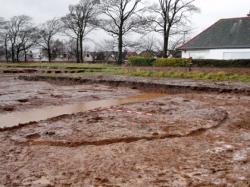 Monkton - Prehistoric decorated cooking pots and food traces from the medieval period have been discovered at a housing development in south-west Scotland where five fire pits and a ring-grooved Iron Age house once stood. Settlers intermittently occupied Monkton, in Ayrshire, between Mesolithic and post-medieval times, according to archaeologists who are describing the site as a “palimpsest of prehistory”. “The earliest identifiable activity on the site was an accumulation of charcoal-rich material that overlay a circular pit, dated to the 7th millennium BC,” says Christine Rennie, who led the excavation and subsequent analyses. “Despite the number of pits and post-holes found across the site, no particular pattern or structures could be identified.“Botanical analysis suggests that some Mesolithic occupation took place here, although the quantity of carbonised material indicates that the location was revisited on more than one occasion. '”Neolithic evidence proved more prevalent. Radiocarbon dating on a range of pottery vessels showed activity between the mid-4th and late 3rd centuries BC. “For a small collection, the assemblage is unusual in containing sherds of various types of decorated pottery and more plain cooking pots from the same period,” says Beverley Ballin Smith, of the Glasgow University Archaeological Research Division “The range of vessels was dominated by Impressed Wares that are relatively rare for this region of Scotland and uncommon when compared to other types of Neolithic pottery. “The Monkton assemblage fills a gap in the South Ayrshire area and provides information on a range of different pots and decorative motifs.” Contrasting sharply with the sparse decoration afforded to the cooking pots, the flamboyant vessel rims could point to broad, extraordinary rituals. A relatively small number of lithic artefacts have been found, mostly dating to the mid and late Neolithic period. “These lithic finds inform on later Neolithic lithic artefact forms and technology – the exchange of Yorkshire flint, which until now has been somewhat less common in south-west Scotland in comparison with the importation of flint from Antrim, and site activities,” believes Torben Ballin, who analysed two stray microlith-related pieces, a pitchstone microblade and a small group of quartz artefacts from the roundhouse. “A scale-flaked, serrated piece relates to the processing of vegetable matter and a scraper may have been engaged in the processing of hides, although it cannot be ruled out that it was used to process harder materials like wood, antler or bone. “Two arrowheads relate to either hunting or warfare.” The roundhouse – one of several known but unexcavated structures around Monkton – was the only identifiable building. Barley and oats were found in the Iron Age pits, with traces of wheat and barley in the Neolithic deposits. Experts believe a lack of charcoal and a number of rotting timbers indicate that the house fell into disuse and may have rotted after years of abandonment rather than burning down.

Aylesbury - A haul of Roman treasure discovered by metal detectors in Buckinghamshire has gone on public show. The Weekend Wanderers, a group from Hampshire, were scouring a field near Aylesbury when they came across the discovery which included coins, the remains of a 2nd century cremation casket, bronze and glass ornaments, pottery, food and drink offerings. The group alerted museum staff at Bucks County Council and archaeologists were called in to carry out a full excavation of the site. Recovered archaeology included an urn, a bronze flagon, a dish containing food remnants, an iron lamp, glassware and high status pottery, along with highly decorated bronze jug handle depicting a scene of figures worshipping next to an altar. 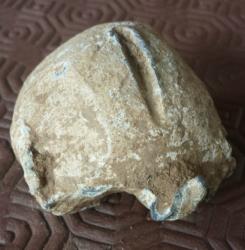 Eagle Drive - A lead ball found at Eagle Drive, on the site of the Battle of Northampton, is believed to be the oldest surviving cannon ball in England. The battle was fought between Yorkists and Lancastrians on 10 July 1460 in the area now known as Delapré Park and the 50-60mm diameter ball was originally found on farmland in the area of Eagle Drive, Northampton, part of the English Heritage-registered battlefield. Mike Ingram, historian, author and chair of Northampton Battlefield Society said: “This is a find of national significance and confirms the battle as one of the earliest in England where cannons can be shown to have been used. It also shows that the Eagle Drive area of the registered battlefield is crucial to the understanding of the whole site.” The ball was actually found several years ago by the late Stuart Allwork, but had been believed lost until last year. Since its rediscovery the cannon ball has been subjected to detailed analysis by Dr Glenn Foard, one of the UK’s leading experts on medieval artillery and noted battlefield archaeologist from Huddersfield University.