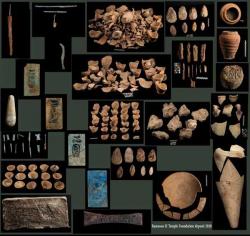 Abydos - The mission of the New York University-ISAW at the Temple of Ramses II in Abydos discovered the temple’s foundation deposits during excavation work carried out at the temple’s southwest corner. Mostafa Waziri, secretary-general of the Supreme Council of Antiquities, said the deposits were buried in 1279 BC at the time of the construction ceremony. They include food offerings, plaques inscribed with Ramses II's throne name painted in blue or green, small copper construction tool models, pottery vessels decorated with hieratic inscriptions, and oval shaped quartzite grindstones. The mission also uncovered 10 large mud-brick storerooms attached to the temple palace, originally roofed with vaulted brick ceilings. They were used as granaries, storage of other temple provisions, offerings, and other small equipment. Twelve sacrificial votive bulls’ heads and bones dated to the Ptolomaic period were found in niches cut into the walls of the storerooms. In addition, a complete skeleton of a bull was found carefully buried under the floor of the temple palace.
http://english.ahram.org.eg/News/366885.aspx

Abu Hureyra - Almost 13,000 years ago, a group of prehistoric nomads in what we now call Syria embarked upon a historic change. They abandoned their hunter-gatherer ways, and became the earliest known pioneers of a new milestone in human civilisation: agriculture. Just where the ancient foragers of Abu Hureyra got this outlandish notion of farming may never be known. But according to new analysis of curious particles found in the soil, those nomads bore witness to an exploding comet. The team behind this research thinks that cosmic impact may well have played a cultural role.Today, the archaeological site of Abu Hureyra is deep underwater, covered by Syria's largest lake, Lake Assad. Before the historical legacy of Abu Hureyra was drowned, though, archaeologists excavated as much of its ancient remnants as they could carry. Amidst flint tools, bones, and hut-like structures, the researchers found something else: spherical beads of glass called meltglass spherules, the likes of which form in extremely hot, high-energy events, usually associated with cosmic collisions involving things like asteroids and comets impacting into planets. For years, researchers have postulated that the existence of these tiny baubles strewn throughout Abu Hureyra is evidence the ancient village was part of what's known as the Younger Dryas impact hypothesis: the contention that a disintegrating comet or asteroid struck Earth 12,800 years ago, showering four separate continents in a fiery rain of destruction so intense, it triggered a wave of extinctions and even brought on a sudden, mini ice age called the Younger Dryas. Some have gone so far as to suggest that this sudden change in Earth's environmental conditions was what caused the prehistoric villagers at Abu Hureyra to abruptly transition from hunting/gathering to cultivation, coinciding as it did with the inception of agriculture in Western Asia. Not everybody is swayed by the argument, however. In new analyses examining the geochemical composition and structure of the village's ancient meltglass formations, the researchers found that the melted grains of quartz, chromferide, and magnetite in the glass would have required exposure to temperatures in excess of 1,720 °C, while some of the material in the glass most likely reached over 2,600 °C. The findings are reported in Scientific Reports.

BOLIVIE - Moxos - :As a new study shows, more than 10,000 years ago, people in the southwest of the Amazon began growing manioc and squash, 8,000 years earlier than previously thought. The area is thus one of the early Holocene centres of plant domestication in the world. People also changed the landscape by creating thousands of so-called forest islands . The earliest human inhabitants of the Amazon created thousands of artificial forest islands as they tamed wild plants to grow food, a new study shows. The discovery of the mounds is the latest evidence to show the extensive impact people had on the area.  From their arrival 10,000 years ago they transformed the landscape when they began cultivating manioc and squash. This led to the creation of 4,700 of the forest islands in what is now Llanos de Moxos in northern Bolivia, the team has found. The research confirms this part of the Amazon is one of the earliest centres of plant domestication in the world. Using microscopic plant silica bodies, called phytoliths, found well preserved in tropical forests, experts have documented the earliest evidence found in the Amazon of manioc -10,350 years ago, squash – 10,250 years ago, and maize – 6,850 years ago. The plants grown on the forest islands were chosen because they were carbohydrate-rich and easy to cook, and they probably provided a considerable part of the calories consumed by the first inhabitants of the region, supplemented by fish and some meat.

Varanger - Large amounts of toxic heavy metals such as cadmium and lead made cod and Greenland seals into harmful food in Northern Norway during the Younger Stone Age. Constantly rising sea temperatures and sea-level rise due to climate change can cause seafood to become equally unhealthy in the future.This is what archaeology researchers are warning about in a recent study published in the journal Quaternary International. UiT The Arctic University of Norway has analysed findings that show that cod in the younger Stone Age had an up to 22 times higher content of cadmium than today's recommended maximum limit. It also had three to four times higher amounts of lead than is considered reasonable today. The Harp seal, of which the Stone Age people also ate a lot, contained 15 times more cadmium than today's maximum limit and three to four times the lead limit. "These substances are very harmful to our health. Cadmium, for example, is highly carcinogenic. We know that such heavy metals have no function in humans and that they can accumulate in the body when they are consumed. The researchers also found high values of mercury in cod and Harp seals, but the values were still slightly below today's maximum limit. The findings were made at settlements in Varanger in Finnmark that date back to the Younger Stone Age, that is, in the period 5000–1800 years BC. The age determination of the settlements is done using C-14 dating (carbon dating). The preservation conditions for organic material, such as bones, are very good in these kinds of places, because of the presence of calcareous sand. This type of sand contains a lot of lime, which helps preserve bones for thousands of years. "This has resulted in us finding many settlements around the Varangerfjord, which contain the remnants of people who lived in the Younger Stone Age. Among other things, we have found lots of organic material that tells us what the Stone Age people ate - like bones from fish, whales, and seals", says Hans Peter Blankholm. The researchers believe that climate change is the reason why seafood during this period was so polluted by toxic heavy metals. When the ice began melting after the end of the ice age (approx. 10,000 years BC), huge water masses were released and the sea level began to rise. Increased sea level then led to erosion of large land areas, and the water took with it large quantities of soil containing toxic heavy metals. Thus, these metals were carried out into the sea, where they eventually entered the food chain of fish and marine animals.