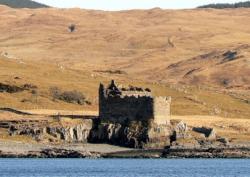 Mingary Castle - A musket ball and canonball have been unearthed by archaeologists working at Mingary Castle in west Ardnamurchan, Lochaber. The objects, which were found in the moat, may be remnants of an attack on the castle walls. The castle is thought to be the best preserved 13th-century castle in Scotland.  The musket ball is just under an inch in diameter and has been described as being “extremely heavy” due to having a high lead content. It is also slightly flattened on one side which historians believe indicates it came into contact with a solid surface such as the castle wall. Jon Haylett, a historian who is documenting the progress of the excavation said: “The cannonball was found at the eastern end of the moat. “It is probably in pieces because it hit the castle wall and fractured before falling into the moat where time and weathering have broken it into four pieces. Previous finds from the excavation include the charred remains of the sandstone castle archway, which it is believed were destroyed in an attack by Alasdair MacColla Mac-Donald in 1645. The castle was occupied by the Campbells at that time and it is thought Mac-Donald was acting on behalf of the Duke of Montrose. Other finds include pottery, a barbed iron arrowhead, coins, bones and another cannonball. The well-preserved castle near the most westerly point of the British mainland was a stronghold for several clan chiefs and the Lords of the Isles, who ruled the Scottish islands. The site is believed to have close links to Somerled, a 12th-century leader of mixed Norse and Gaelic descent.

ROYAUME UNI - Fountains Abbey - Archaeologists are trying to shed new light on the lost past of one of the region’s most spectacular heritage sites. A team are working at Fountains Abbey and Studley Royal near Ripon to discover more about the lost bathing house in the estate’s water gardens. The bathing house was constructed in the 1730s by the family which created the water gardens which helped earn the site its World Heritage Site status. A classically-inspired building, the bathing house consisted of a changing room and a covered plunge pool, fed by spring water and linked by a central corridor. Demolished in the 1850s, nothing visible remains of this hidden treasure which formed a pivotal role in the 18th-century garden. Two trial trenches were dug in July which has helped to inform this second, longer excavation. Starting tomorrow, August 14, experts from Field Archaeology Specialists plan to control the spring water supply that still runs to this day. In addition, they hope to uncover and understand any archaeological remains that survive, so that they can be appropriately conserved. 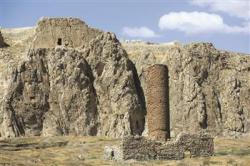 Van Castle - For the first time, 3-D models of kings’ tombs in Van Castle, the capital of the Urartu Kingdom, are being made using lasers and the latest development technology.  As the archaeological works have been continuing in the old city of Van and Van Castle, the stone tombs of Urartu kings, one of the most important monuments from the Urartu period, will be explored in detail with the 3-D models. The Istanbul University Van Region History and Archaeology Center director, Professor Erkan Konyar, said the kings’ tombs in Van Castle showed the success of Urartu architects.  “Besides the works in the old city of Van and the tumulus, another working field is the citadel area. There are monumental tombs of the Urartu kings here. These tombs prove to us that the Urartu architects were the biggest architects of the first millennium. We see here that 200-square-meter stones were processed and tomb houses for kings were created. We are documenting this area. This is very important work in terms of science. We are working with a team made up of topographers, architects and interior decorators.” 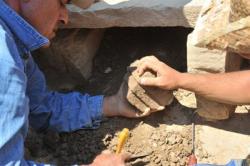 Zominthos - Archaeologists excavating at Zominthos, a small plateau in the northern foothills of Mount Ida (Psiloritis) on the Greek island of Crete, have unearthed a rare stone libation altar inscribed with the enigmatic Minoan Linear A script. The altar, which was found in an excellent state of preservation beneath a stone bench, is unusually shaped in that it consists of three stepped tiers or levels that extend upwards from the base. A small hollow cavity is found on the altar’s otherwise flat surface.  Hailed as the most significant find of this year’s excavation season at Zominthos, each of the altar’s twelve sides or registers is inscribed with symbols of the Linear A script. “It is a ritual altar, hence its small dimensions (20x20 cm)”, explained archaeologist Dr. Effie Sapouna-Sakellarakis, who discovered the rare artefact a few days ago during the excavation of the large building complex at Zominthos. “The study of the inscription will take time and will certainly be conducted by specialists of the Minoan script in the hope that it will reveal important information about the rituals that took place at Zominthos around 3,500 year ago” she added. The altar was not the only ritual object discovered at the site this year, which testifies to the sacred character of the complex, which is now unquestionably recognized as a palace.

Limerick - Workmen unearthed a burial site near Limerick’s King John’s Castle which may date to the 13th century. Three human skulls were among the disarticulated bone parts discovered just off Nicholas Street and the site was immediately sealed off and the National Museum informed. Aegis archaeologist, Tracy Collins, said the remains could date back to the 13th century. She said: “Another possibility is the burial site is linked to the Widows Alms Houses which stood nearby and where women were given refuge by local charitable donations in the 19th century.”