Taosibei - A tomb of an upper-class female from the late Spring and Autumn Period (770-476 BC) has been excavated at the Taosibei cemetery site in Xiangfen county of North China's Shanxi province. The owner of the tomb was a 30-year-old pregnant woman, with the bones of an 8-month fetus found in her womb. This tomb, 6.5 meters long, 5.4 meters wide and 9.8 meters deep, was paved with stones which could only be used in tombs of the nobility in ancient China. As the tomb also contained a collection of five bronze ding vessels, archaeologists believed this woman was from an upper-class family. Wooden burial utensils in the tomb were already rotten. Additionally, 134 pieces (sets) of other funerary objects have been unearthed, most of them copper ware, as well as others made of lead, tin, jade and clay. 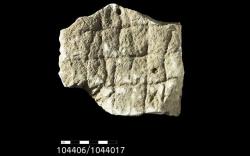 Tell eṣ-Ṣâfi/Gath - A recent Palestine Exploration Quarterly article charts an unprecedented number of 4,500-year-old gameboards and game pieces discovered in an Early Bronze Age neighborhood at Tell eṣ-Ṣâfi/Gath, home of the notorious biblical bully. While the four gameboards, multiple dice and several carved pieces uncovered at Gath wouldn’t have been used by the giant slain by the future king David (Goliath entered popular culture through a biblical tale that may have taken place by a good millennium and a half later), they do offer insight into the lives and leisure time in the Levant, circa 2800–2600 BCE. Likewise, the proliferation and choice of board game — a derivative of the Egyptian game senet — aids researchers in understanding the osmosis of culture between ancient Canaan and Egypt. Evidence for one of the particular games discovered at Gath — senet — is seen in Egypt in the late 4th–early 3rd millennium BCE. The other game that may have been played at Gath is called “30 Houses,” which is a Canaanite adaptation of senet. “If so, this is the earliest evidence of the ‘30 Houses’ game from the southern Levant and the only one from the Early Bronze Age .

Longmen Grottoes - Archaeologists have found gold and silver elements and colored glass on Buddhist statues at the Longmen Grottoes, a UNESCO World Heritage site, in central China's Henan Province. This was reported by The Xinhua News Agency. Based on advanced technologies, archaeologists found gold and silver elements on the face of Vairocana Buddha, a giant statue that was built in the Tang Dynasty (618-907). On the body surface of the giant Buddha, archaeologists also found the remains of green, red, black and other colored pigments, indicating that the statue was probably "wearing colorful clothes" at that time. Moreover, colored glass eyeballs made of silica and lead were discovered on a Bodhisattva statue to the right side of the Vairocana Buddha. The eyeballs are arc-shaped and about 0.5 centimeters in thickness.

Mazatlán - An excavation at the port of Mazatlán ahead of a construction project has uncovered burials of the Aztatlán culture dated to between 900 and 1200 A.D. Archaeologist Víctor Joel Santos Ramírez said that the site in northwestern Mexico was once a natural high point in the landscape of estuaries. Many Aztatlán burials consist of human remains placed inside pots, he added, but these poorly preserved remains were found under a layer of shell debris and accompanied by ceramic artifacts. An unknown Aztatlán settlement probably stood nearby, he added.

Prusias ad Hypium - An asymmetrical pithos, or a very large earthenware jar, used for water or grain storage has been found during the excavations carried out in the ancient city of Prusias ad Hypium in the northwestern province of Düzce. During the excavations, the head of Medusa, known as the "snake-haired female monster that turns anyone who looks into the eyes into stone" in Greek mythology, and various statue heads, tombs and many artifacts that are thought to belong to the first or second century B.C., have been unearthed to date. In recent studies, the theater part of the city is being revealed thanks to archaeological digs. As a result of the work, the excavation team concentrated on the upper part of the ancient theater, and an asymmetrical pithos that was probably used for water or grain storage was found next to the late Ottoman-early Republic building foundations. The officials continue to work on removing the pithos as soon as possible to determine which period it belongs to.

Norfolk - The wreck of one of the most famous ships of the 17thcentury – which sank 340 years ago while carrying the future King of England James Stuart – has been discovered off the coast of Norfolk. Since running aground on a sandbank on May 6, 1682, the wreck has lain half-buried on the seabed, its exact whereabouts unknown. The Gloucester represents an important ‘almost’ moment in British political history: a royal shipwreck causing the very near-death of the Catholic heir to the Protestant throne at a time of great political and religious tension. The Gloucester was commissioned in 1652, built at Limehouse in London, and launched in 1654. In 1682 it was selected to carry James Stuart, Duke of York, to Edinburgh to collect his heavily pregnant wife and their households. The aim was to bring them back to King Charles II’s court in London in time, it was hoped, for the birth of a legitimate male heir. The ship had set sail from Portsmouth with the Duke and his entourage joining it off Margate, having travelled by yacht from London. At 5.30am on May 6, the Gloucester ran aground some 45km off Great Yarmouth following a dispute about navigating the treacherous Norfolk sandbanks. The Duke, a former Lord High Admiral, had argued with the pilot for control over the ship’s course. Within an hour the vessel sank with the loss of hundreds of the crew and passengers. The Duke barely survived, having delayed abandoning ship until the last minute. As well as the Duke of York, the Gloucester carried a number of prominent English and Scottish courtiers including John Churchill, later the 1stDuke of Marlborough. Artefacts rescued and conserved include clothes and shoes, navigational and other professional naval equipment, personal possessions, and many wine bottles.

CHYPRE - Dromoloxia-Vyzakia - Excavations of an ancient city next to Larnaca airport point to a wealthy Cypriot society as old as 3,600 years, which had established contacts with cultures all over the Mediterranean and beyond, the Cypriot Department of Antiquities said Friday. In a statement, it said that a Swedish archaeological mission, which just completed the excavation of ancient tombs at Dromoloxia-Vyzakia next to Larnaca airport, unearthed exquisite burial gifts which came mainly from Mycenae and the Minoan cities in Greece, and to a lesser extent from Anatolia, Syropalestine and Egypt. Among the articles unearthed were alabaster pots from Egypt which mimicked Cypriot ceramic and were very popular during the dynasty of Pharao Thutmosis III in the 15th century BC, scarabs and ivory objects. Some of the scarabs have inscriptions with hieroglyphs, which will be deciphered, the statement said.“In short, the kind of the objects found point to a wealthy Cypriot society, which had established contacts with cultures all over the Mediterranean and beyond,” the statement said. It added that the wealth of the society under archaeological scrutiny came from the production of copper and its trading in the form of bronze over long distances. The Antiquities Department said the findings were discovered in two “family tombs” excavated by a mission headed by Professor Peter Fischer from the University of Gothenburg, Sweden. The excavated city of Dromoloxia-Vyzakia flourished between 1630 and 1150 BC.

Xinjiang - A new Chinese study on the ancient populations of Xinjiang purports to show modern-day residents descend from a mix of ethnicities, but scientists and experts on the region cautioned the findings are being used to support  China’s forced assimilation policy toward the predominately Muslim Uyghurs. The study from the Institute of Vertebrate Paleontology and Paleoanthropology at the Chinese Academy of Sciences is based on 201 ancient human genomes from 39 different archeological sites in the Xinjiang Uyghur Autonomous Region (XUAR). Scientists analyzed the genetic composition, migration and formation of the ancient inhabitants of Xinjiang during the Bronze Age, which lasted from 5,000 to 3,000 years ago, the Iron Age, which lasted between 3,000 and 2,000 years ago, and into the Historical Era, which started about 2,000 years ago. They published their findings in the April edition of the journal Science in an article titled “Bronze and Iron Age population movements underlie Xinjiang population history.” The report states that the region’s ancestral population during the Bronze Age was linked to four different major ancestries — those of the Tarim Basin, which includes present-day Xinjiang; Central Asia; and the Central and Eastern Eurasian Steppes. “Archaeological and mitochondrial studies have suggested that the BA [Bronze Age] inhabitants and cultures of Xinjiang were not derived from any indigenous Neolithic substrate but rather from a mix of West and East Eurasian people, whereas BA burial traditions suggest links with both North Eurasian Steppe cultures and the Central Asian BMAC civilization,” the report says, referring to the Central Asian Bactria-Margiana Archaeological Complex (BMAC) in the south. Further mixtures between Middle and Late Bronze Age Steppe cultures continued during the late Bronze and Iron Ages, along with an inflow of East and Central Asian ancestry, the report says.