Darkhan-Uul - The tomb was found in the vicinity of Khongor soum of Darkhan-Uul aimag. The excavation, which began on June 6, 2022, is currently in its final stage. The research team, consisting of first and second-year students of the History and Archeology Department of Ulaanbaatar University, reported that a whole marmot, a deer head, a human jaw, metal objects, and fragments of a bronze pot were discovered from the inside of the tomb. The findings that date back to the period of Xianbei were discovered a few times in the past in the territory of Mongolia. The Xianbei were ancient nomadic people that once resided in the eastern Eurasian steppes in what is today Mongolia and the Inner Mongolian Autonomous Region. After the downfall of the Xiongnu, the Xianbei established their confederation in Mongolia starting in AD 93.

Palenque - After four years of fieldwork, a group of restorers from the National Institute of Anthropology and History (INAH) confirmed that the roof of the ceremonial and administrative center of the city of Palenque, in Chiapas, known as the Palace, was painted in Red color. According to the statement issued by the INAH, by intervening in an integral manner said pre-Hispanic building, From its roofs to its foundations, the specialists registered important discoveries; among the most recent, the detection of remains of original red polychrome. According to the specialists, “the trace of red pigment –produced from iron oxides and other minerals– has been once again covered with protective layers and plasters of lime and sand, in order to guarantee its permanence in the future. Regarding the access discovered on the roof of House D, which measures 75 by 45 centimeters and preserves three steps, the archaeologists think that its function was to control the entrance through a surveillance post or, even, it is suggested that it was used to give roof maintenance in pre-Hispanic times. Leiyang - A team from the Archaeological Research Center of Hunan province discovered 14 ancient brick tombs at Leiyang, a county level city, on Monday. Initial analysis indicates the tombs' age range from the Eastern Han Dynasty (25-220) to the Tang Dynasty (618-907). Six of the tombs have been excavated, and more than 130 relics were unearthed, including pottery, bronze ware, iron wares and decorations. Unearthed relics will provide important materials to study the economic development of Leiyang in ancient times, such as the development of animal husbandry and agriculture, Tepebag Mound - In the 2022 excavations of Tepebag Mound, located around Taşköprü, the center of Adana province in Turkey’s Mediterranean Region, a 3800-year-old cylinder seal was found. It is thought that the mound was located in the same place as “Uru Adaniya”, one of the most important cities of the Cilicia region, mentioned in Hittite written sources. In previous excavations at Tepebağ Mound, which was on important trade routes in ancient times, the remains of an Assyrian palace dating back to the 7th century BC were reached. In addition, an Egyptian Seal belonging to the 7th century BC was found in the same layer. A cylinder seal is a small pierced object, like a long round bead, with written characters or figurative scenes or both, carved in reverse (intaglio) and hung on strings of fiber or leather. A cylinder seal is a small round cylinder, typically about one inch (2 to 3 cm) in length. Sha’ar HaGolan - The Yarmukians:this 8,000-year-old Neolithic agricultural culture is considered the first culture in the prehistoric area of what today is called Israel. It is one of the oldest cultures in the Levant to make use of ceramic pottery, with a distinctive style of herringbone decorations incised in horizontal and diagonal lines over the body of their ceramic cooking, serving and storage vessels. The culture is also known for its enigmatic and iconic “Mother Goddess” figurines, which are believed to have been part of a Yarmukian fertility cult. Renewed excavations at the Sha’ar Hagolan Yarmukian archaeological site at the Sha’ar Hagolan kibbutz this month have revealed an unusually large and impressive ceramic goddess figurine of the “Mother Goddess.” Created in the typical seating pose, the 20-centimeter figurine was found broken in two pieces next to the wall of a home. The broken figurine was covered by a bracelet with a red bottom, the color which represented fertility. A schematic stone with etched eyes and mouth was also uncovered. This woman ceramic figurine is a hallmark of Yarmukian culture. This is one of the largest examples of the figurine found. It is of a large, seated woman with big hips, a unique pointed hat and what is known as ‘coffee-bean’ eyes and a big nose. One hand is positioned on her hip and the other one under her breast. Though dubbed “coffee-bean” eyes, the traditional eyes of the figurine more likely represented kernels possibly of wheat, or more likely barley. 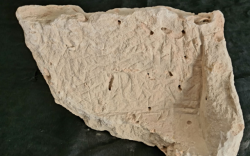 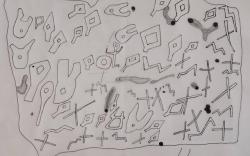 Jerusalem - Expert claims to decipher ancient script on tablet he believes was used in voodoo ceremony; Antiquities Authority awaits further ‘scientific research and publication’. A professor at the University of Haifa claimed on Wednesday that he had deciphered a 3,500-year-old stone tablet discovered in Jerusalem more than a decade ago, contending that the artifact’s inscription was a curse against the city’s governor at the time. If the finding is confirmed, it is among the earliest inscriptions discovered to date in Jerusalem. The stone tablet is inscribed with the repeated phrase, “cursed, cursed, you will surely die,” and singles out the “governor of the city,” according to Galil’s translation. The inscription contains 20 words and 63 letters in the Proto-Canaanite script, an early Semitic alphabet, and a predecessor to modern alphabets used in the region.,The stone was discovered in 2010 by archaeologist Eli Shukron in an ancient compound called the Pillar Temple in the City of David, near the Gihon Spring.

MEXIQUE - Vista Alegre - UC San Diego researchers have unearthed thousands of Mayan artifacts in the Vista Alegre and Conil areas on the north coast of the Yucatan Peninsula. The study was published in the Journal of Island and Coastal Archeology. Scientists say Vista Alegre was once a bustling trading port. Up to 40 platforms were discovered in the area, which served as the foundation for buildings. The largest of these is a pyramidal structure about 13 meters high and probably served as a temple or a viewing platform for observing the sea. Researchers have also found food remains that speak about the diet of the locals , and tens of thousands of artifacts. So, a lot of pottery and hundreds of pieces of obsidian were found. This indicates that the ancient Maya were involved in marine trade with other peoples. Earlier, archaeologists found out that the ancient Maya used resin and bitumen to fill teeth and fix jewelry.

Renaico - All the archeological remains that have been unearthed tell the story of human presence here that began at least 2000 years ago, although the period of greatest interest is the time around 1000 A.D. Between December 2020 and March 2021, three archeological digs were conducted. . Following the archeological excavations, experts analyzed the recovered material in the laboratory. The discoveries at the Renaico wind farm open a series of interesting lines of enquiry concerning the prehistory and ancient history of the Araucanía region. Some elements in particular have proved instrumental in plotting social and cultural aspects that are difficult to reconstruct, like cultural exchanges between people and contacts between distant populations. One of the most striking is a particular lip decoration that was worn between the lower lip and the chin (tembetà): this was the first time that this object had been found in the Araucanía region, as previously it had only been discovered much farther north in the area of Cauquenes. Another unexpected discovery was a large quantity of obsidian. This is a volcanic rock, a sort of natural glass that was of great value in ancient times as it could be used to produce very sharp tools and was perfect for producing spear tips and knives. Being a rock of volcanic origin, however, it must have originated in the Andes mountain range, indicating that the people living in the region where today the Renaico wind farm is located traded with people from the mountains. In light of what has been found so far, archeologists have formulated a hypothesis about the ancient function of the area: the site could have been a venue for meeting and trading, where communities from other areas in southern Chile, or even beyond, came together to discuss, trade and gather news to take back to their communities.