Guntur - Ahead of commencement of works on the construction of the new Capital in Guntur District, the Department of Archaeology and Museums has undertaken a detailed survey to identify the archaeological monuments that are likely to get impacted.Department of Archaeology and Museums Assistant Director S. Bangaraiah said that the technical assistants had unearthed Buddhist and Jain sites in addition to certain pre-historic burial sites in a few areas in Guntur. These structures have been identified in Penumaka, Vundavali, Vademanam and Vaikuntapuram, among other villages during the survey. Efforts were on to continue the survey for the next 45 days, he said. He said Amaravati, a historical town where a Buddhist Stupa and a school of art named after the Buddha are located in the Capital region, has already been declared as heritage town. Dharanikota near Amaravathi was once the Capital of the Satavahana dynasty and it later emerged as key centre of Buddhism and laid foundation for its expansion in the State subsequently. Decades-old Shiva and Vaishnava temples are also located in this region. 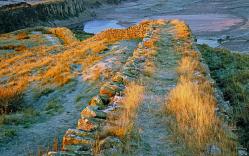 Hadrian's Wall - Illegal digging on Hadrian's Wall in Northumberland has been branded a worrying "heritage crime". Evidence of excavations have been found by National Trust staff at Steel Rigg and Peel Crags on the central section of the world heritage site. The damage, thought to be from "nighthawking" - the illegal use of metal detectors - has been condemned by police, English Heritage, the National Trust and Northumberland National Park Authority.,At the nearby site of Vindolanda Roman fort, where annual organised excavations have produced remarkable finds, director of the Vindolanda Trust Patricia Birley said: "The trust deplores the illegal use of metal detecting. "It is a destructive activity that cheats ordinary interested people and our national heritage by stripping away the full archaeological value of objects and their contexts that only proper archaeological investigation can achieve."

Pundareekapuram temple -  When the swarming termites spelt trouble for Pundareekapuram temple near Thalayolaparambu near Kottayam a year ago, eating away the wooden structure at an alarming pace, the authorities tried out traditional methods to control the insects, but to no avail. None of the methods worked till the assistance of archaeology department was sought. The chemical treatment that freed the temple from termites will now be applied to Padmanabhapuram Palace which has been included in the draft list of Unesco world heritage sites. The 500-year-old palace with its unique wooden architecture is most likely to be declared as one among the global heritage sites. The archaeology department has roped in experienced anti-termite treatment agency for the herculean task.The chemical treatment involves injecting concentrated chemical solution at the infected areas most likely on walls and wooden areas. The method has been successfully employed to conserve about 10 historical monuments in and outside the city from termite attack last year. "The treatment includes making holes within a distance of 1 ft each using drilling machine at the meeting point of ground and wall. The mix of various chemical solutions is then injected scientifically making it to get saturated with the soil. This action allows the solution to block the termite colonies and resists the insect from spreading to other parts," said archaeology chemist Jaikumar. He also said that on wooden structures the solution will be applied using brush. The action will be followed by closure of monuments for one week as a preventive measure against chemical allergies to the visitors and attenders. The process is set to begin this month and is expected to be completed by the end of March. The palace is mostly made of wood and detecting possible places of attack of termites and undertaking chemical treatment will be a time-consuming process.

INDE – Bidar - Two horse polo posts built by medieval kings, which were a reminder of Bidar’s rich cultural history, have disappeared now. They were on a piece of empty land in the middle of the city on Udgir Road.They were part of the set of four pillars, put up on two sides out of a large polo field of over 590 yards. The pillars were huge, with a circumference of 16 ft, a height of 7 ft and a girth of 8 ft. The other two pillars are behind the new bus stand.In the book ‘Bidar: Its history and monuments’, the late Ghulam Yazdani, former Director of Archaeology with the erstwhile Hyderabad Nizam State, referred to them as Ran Khambh. He says the four pillars are on two ends of a large playing field. But they were called Ran Khambh (war stones) as sport was so important to them that it was likened to war, he says in the book. The book marks them as medieval era structures, but does not clearly say who built them. 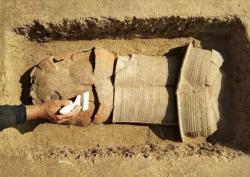 Ekamreswar temple - The excavations at Ekamreswar temple near the famous Lingaraj shrine here have revealed another miniature temple on its southeast corner. Towards the end of January, the crown of a minor temple had been exposed when construction of the retaining wall of the 10th century Ekamreswar temple had been in progress. A week ago, four small Shiv lingams were also discovered on the eastern side of the main temple. The miniature shrine would be completely excavated within a fortnight. The find comes two months after the Archaeological Survey of India (ASI) excavated the campus of Sari temple and found a huge complex comprising the twin structures of Sua and Sari near the bank of Bindusagar. Deputy director, culture and superintending archaeologist (in charge) of the state archaeology Bhabani Prasad Ray said: "The first excavation started at the Ekamreswar temple in the last week of August in 2013. Only one miniature temple and a paduka kund(outlet) were unearthed at that time. But with subsequent excavations around the main temple, four more lingams were also found." As the excavation was more than 12-feet deep and there was every possibility of a landslide, the state archaeology authorities decided to build a retaining wall. Once it is ready, the parikrama (space around the main temple and between the retaining wall) will be developed, so that visitors can go down using a staircase, take a stroll around and return.

JAPON - Wakayama - Divers working to salvage artifacts from the wreck of the Ottoman frigate Ertuğrul in the Pacific Ocean have discovered coins from the boat’s safe on the bottom of the ocean, but worries remain that more effects from the ship will be destroyed with the passage of time.Ottoman coins have been found on previous expeditions on the ocean floor.The frigate was sent by the Ottoman Sultan Abdülhamid II to give gifts to the Japanese emperor, but it encountered a typhoon off the coast of Wakayama Prefecture and sank on Sept. 16, 1890. The accident resulted in the loss of 533 sailors.Excavations started on the frigate in the Pacific Ocean six years ago. Works started once again on Jan. 19 with a team including eight Japanese divers, a Spanish archaeologist and U.S. scientists under the leadership of Turanlı. Within the scope of the project, sponsored by the Mersin Naval Trade Chamber and Turkish Airlines, excavation works have been carried out 100 meters off the coast under waters reaching a depth of 20 to 40 meters.The gold, silver and bronze coins were found in a cave 20 meters deep. At the same time, 264 pieces from the frigate, as well as the personal effects of some of the sailors were brought to light during the works, according to officials.

Assouan - The 1,000-year-old dome of a mausoleum in Aswan’s Fatimid cemetery was severely damaged Monday after a derrick fell on it during nearby construction, said head of Islamic and Coptic Monuments Dept. at the antiquities ministry Mohamed Abdel Latif.The dome, which faces the western gate of the Nubian Museum, is located in Aswan’s Fatimid Cemetery, comprising tombs dating from the seventh to the 12th century A.D.The cemetery originally comprised of 80 tombs, out of which 30 tombs still exist, while the rest have been lost due to urban expansion and the fragile materials like mud brick used in constructing the tombs.