Prusias ad Hypium  - During the excavations in the theater of the ancient city of Prusias ad Hypium, a marble block decorated with plant motifs was unearthed, depicting the hunter Actaeon, who was killed with her dogs because she angered the Goddess Artemis. Inlaid marble blocks and architectural figures were unearthed in the stage section of the ancient theater, which is thought to belong to the Roman period. The most striking of the blocks decorated with floral and mythological elements was the hunter Actaeon, who was killed with his own dogs by angering the Goddess Artemis in mythology. The Actaeon, which was made unrecognizable by three dogs, is at the top of the block takes place decorated with herbal decorations. Other remarkable finds are the superstructure blocks belonging to the stage building with tragedy, comedy, and drama masks, similar to which have been found in the same area before, and the structure blocks with floral decorations. Actaeon was a Thebian huntsman hero in Greek mythology. He son of the minor god Aristaeus and Autonoë (daughter of Cadmus, the founder of Thebes in Boeotia); he was a Boeotian hero and hunter. According to Ovid’s Metamorphoses, Actaeon accidentally saw Artemis (goddess of wild animals, vegetation, and childbirth) while she was bathing on Mount Cithaeron; for this reason, he was changed by her into a stag and was pursued and killed by his own 50 hounds. Because the dogs do not realize that they are tearing their master to pieces, they howl in search of Actaeon. So they come to Chiron’s cave. Chiron also makes a statue of Actaeon to calm the dogs. Balsa - In the Roman city of Balsa, one of the most important and symbolic archaeological sites in southern Portugal, archaeologists have unearthed a complex in which fish sauces and pastes were produced in the 1st and 2nd centuries AD. Tanks and a villa site were unearthed by the Unidad de Geodetección team of the University of Cádiz to produce fish preparations such as garum, known as cetarias, located in the ancient Roman city of Balsa, near Tavira. In addition to the explanation: the data indicate that these factories, or part of them in the 1st and 2nd centuries AD and were controlled by a large and wealthy house (villa) located on a platform a little over 100 meters high.

Anavarza - Archaeologists discovered gladiator tombs at the ancient city of Anavarza in Türkiye’s southern Adana province. The excavation team has been carrying out excavations at the site near the amphitheater and the theater sections this season. Noting that they found the tombs near the southern part of the excavation site, close to the amphitheater, Gülşen said they believe the gladiators fought here.

Jánovce  - In the village of Jánovce near Poprad, archaeological research, which has been carried out there since the beginning of July, has resulted in evidence of settlements mainly from the La Tene Culture, i.e. the 1st century BC. In less than a month, researchers managed to discover approximately 3,000 artifacts in the locality. The rarest objects include, for example, glass beads. We also found glass decorated with eyelets, which is rare.”. A part of a bronze belt deserves attention. Archaeologists examined two probes in the western part of Hradisko in Machalovce, following up on the results of last year's research, when wheel pits cut into the bedrock were found. Another wheel pit was found on the outer side of the rampart. It contained the remains of a burnt-out wooden wheel, and based on this, according to Hudáková, it can be assumed that the rampart had a wooden grid structure. It was filled with massive stone slabs and clay. The construction was burned in the examined parts, which can be attributed to the destruction of Hradisko in the 1st century BC until the beginning of the 1st century AD. During this period, the Celtic tribe of the Cotins lived here, which we associate with the archaeological culture of Púchov. Its function was commercial and productive, also evident from the finds: these are work and craft tools, finished products, as well as several hundred coins, proof of the territory's commercial character, Repka added. They were at the crossroads of trade routes, which the locals profited from. During this season, they discovered various ceramics, bronze and iron products, decorative objects, but also, for example, whorls made of graphite ceramics.
Čítajte viac: https://spectator.sme.sk/c/22973239/3000-artifacts-in-less-than-month-locality-near-poprad-keeps-archaeologists-busy.html

CHINE -  Xi'an - Archaeologists have unearthed more than 140 cultural relics from six Eastern Han Dynasty (25-220) tombs in Xi'an, the capital of northwest China's Shaanxi Province. The items are made of pottery, stone, copper and other materials. Significantly, archaeologists found 11 floor tiles with inscriptions underneath in the side room of a tomb, according to the Shaanxi Academy of Archaeology. The inscriptions include words that indicate the exact period they were made, as well as patterns such as a dragon. According to the shape and structure of the tombs, the combination of unearthed relics and the characteristics of funerary objects, the six tombs were family burial sites during the middle and early Eastern Han Dynasty, the academy said. The inscriptions on the backs of the tiles are rare in the excavation of Han tombs, thus they are important for the study of burial customs during the period, it added.

Chengang - Around 240 kilometers from the Jiaojia excavation site in Jinan, capital of Shandong province, archaeologists have unearthed yet another 5,000-year-old portal to the past at Chengang village in Tengzhou city, in the southern part of the province. Situated on the banks of Kuohe River, the Gangshang site sprawls over 800,000 square meters and approximately half of the area comprises the ruins of a city, according to Shandong Provincial Institute of Cultural Relics and Archaeology. By January, excavations had been conducted over 1,100 sq m, leading to rammed earth walls and trenches, 31 tombs, seven houses and other traces of human activities. These provide solid study materials on the origin of the early states, says Zhu Chao, an associate researcher at the institute and team leader of the Gangshang excavation. "Our excavations and studies show that the civilization, which represents the middle and late phases of Dawenkou Culture, is right at the critical juncture of time when states started to form," Zhu says. "The tombs have social grading, which indicates that our ancestors viewed their afterlife as equally important," he adds. Of the 31 tombs unearthed, there is one 3.3 meters long and 3.2 meters wide, with four bodies. Archaeologists have not been able to confirm the gender of the youngest, but the other three are males. The number and size of jade artifacts buried along with the bodies decline with their age, the obvious evidence of social classification, says Zhu. Along with 15 jade artifacts, this particular tomb yielded more than 300 pottery items, which account for one-third of the total such relics unearthed at the Gangshang site so far. "Unlike the four-body grave, we did not find burial goods in small tombs. In other words, high status meant more fortune," he adds. Archaeologists have also found remains of chests that contained these burial goods. These were positioned in different parts of the tombs. Some were close to the head, some near the feet and some placed beside the body. "The chests are key to studying the burial rites held 5,000 years ago," says Zhu. Among other intriguing relics found at the site are antler hoes, crocodile bone plates and tortoise shell wares. Archaeologists have unearthed seven tombs, each housing a man and a woman of approximately the same age. In addition to these, they found three upside-down tripod pottery tombs with remains of unborn babies. Residential ruins include plinths and holes, where pillars were erected to support houses. "The ruins of a city, high-grade tombs and social classification suggest there was state demarcation in this region 5 millennia ago," Zhu says.

Tell el-Farma - Archaeologists unearthed the ruins of a temple for the ancient Greek god Zeus in the Sinai Peninsula. Tell el-Farma, also known by its ancient name Pelusium, dates back to the late Pharaonic period and was also used during Greco-Roman and Byzantine times. There are also remains dating to the Christian and early Islamic periods. Archaeologists excavated the temple ruins through its entrance gate, where two huge fallen granite columns were visible. The gate was destroyed in a powerful earthquake in ancient times . The ruins were found between the Pelusium Fort and a memorial church at the site. Archaeologists found a set of granite blocks probably used to build a staircase for worshipers to reach the temple. Excavations at the area date back to early 1900 when French Egyptologist Jean Clédat found ancient Greek inscriptions that showed the existence of the Zeus-Kasios temple but he didn’t unearth it. Zeus-Kasios is a conflation of Zeus, the God of the sky in ancient Greek mythology, and Mount Kasios in Syria, where Zeus once worshipped. Inscriptions found in the area show that Roman Emperor Hadrian (117-138) renovated the temple. 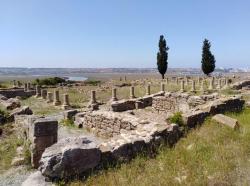 Lexus - A Moroccan-Spanish team has just relaunched new excavations of the greatest Roman antiquity fish salting unit in Morocco’s Lixus, near Larache city. The excavations found two new basins on traces of the ancient fish salting port of Lexus, confirming the existence of the Roman Empire’s largest fish incubating factory in Morocco. The fish salting port is believed to date from the first century BC. This Moroccan-Spanish program is a four-year project aimed at determining the scope of fish production in an ancient Roman factory that flourished between the fifth and first centuries BC.
https://www.moroccoworldnews.com/2022/08/350713/new-archeological-discoveries-found-on-traces-of-ancient-fish-salting-port-of-lixus