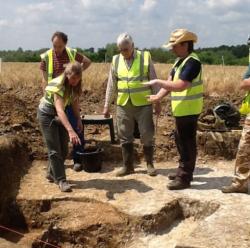 Bulmer - A community archaeology group has unearthed some interesting clues to the ancient history of an area on the outskirts of Sudbury.Stour Valley Community Archaeology (SVA) has just held its first excavation over two weekends at Goldingham Hall in Bulmer, on the Suffolk/Essex border.The site at Goldingham Hall was chosen because geophysical surveys carried out last year revealed many interesting features that were previously unknown. SVCA committee member Nick Moore said the dig concentrated on three features, which after many hours of backbreaking digging and sieving eventually revealed a large complex containing a food preparation area with six bread ovens and a series of ditches filled with burnt pottery and bones. Post-excavation analysis will reveal specific dates, but preliminary thoughts date the site to late Anglo-Saxon or Norman times.Mr Moore added: “Many finds were discovered, including an in situ medieval arrowhead, and most incredibly, a ‘flint face’ found at the bottom of the post hole of the structure. We are wondering if this could have been a good-luck charm placed in the foundations of the building. 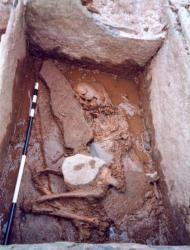 Portsmouth -A new dive to the remaining submerged sections of the Mary Rose has allowed archaeologists to survey the current state of the shipwreck in the Solent Experts described the investigation – the first major dive to the underwater remains of the Mary Rose shipwreck in nine years – as “very successful”. Coinciding with the anniversary of the new Mary Rose Museum, divers placed a datalogger on the seabed and a high-tech buoy on the surface of the water, beaming back information to scientists via satellite. “The visibility was not good, but it was good enough to position the monitoring equipment and for Serco Marine to carry out the dives needed to put new sinkers on the seabed and to replace the ageing wreck buoy that marks the protected wreck area.” “There are still significant numbers of timbers and objects buried in the seabed,” he explained. “The information collected will help us protect the buried materials for the future.’’

Cholula - Since its discovery in 1969 Los bebedores or The Drinkers, is a large pre-Hispanic mural that has remained hidden from public view. However, visitors can now see the mural at the Mexican archaeological zone of Cholula near Puebla for a limited period only.The mural measures over 60 metres long with an average height of 2.50 metres. There are 164 characters represented and all of them are participating in a celebration where pulque (alcoholic beverage made from the fermented sap of the agave plant) is overflowing. “So all are in a state of intoxication”, says Enrique Lozoya.The mural, located on a lower level of the Plaza of Altars, (dating to around 200 AD) was painted onto the façade of one of the buildings, so was originally in full view. About 150 years later these scenes were covered over and geometric designs were favoured such as can be seen in the Stars and Stripes mural. 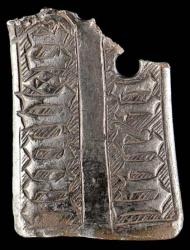 Hastings - An eminent battlefield archaeologist is to return to the site of the Battle of Hastings in an attempt to find the last archaeological remnants of the 1066 battle and preserve them from modern contamination. Dr Glenn Foard, of the University of Huddersfield, is developing a project with English Heritage designed to unearth any genuine material remaining on the 1066 battlefield site, which he says is being “contaminated” by the sheer number of battle re-enactments that happen there. A first stage, likely to take place in spring 2015, would see the top layers of soil machined away within a "substantial" area of the battlefield, eliminating modern artefacts. A search for genuine remains from the battle of 1066 would then begin.

Maryport - The excavations have been commissioned by the Senhouse Museum Trust after archaeologists last year confirmed the remains of a rectangular building on the site was almost definitely a classic-type temple. It was, therefore, the most north westerly temple known in the Roman Empire. Dig director, Professor Ian Haynes, said it was possible that the circular building next to it was a mausoleum of some kind, though he doubts it. He said the structure closely resembles Arthur’s O’on, a circular Roman temple discovered in Scotland which was destroyed after being excavated.

ROYAUME UNI - Petersfield Heath  -A four-year project to uncover the history of Petersfield Heath begins later this month.Experts and volunteers will investigate the 21 known barrows which form a barrow cemetery, one of the best perserved in England. The burial mounds date back to the Early Bronze Age and comprise a mix of ‘styles’ that are typical of Wessex, as seen around Stonehenge and Avebury. The project, named The People of the Heath, will be launched on June 22 with a meeting to lay out the aims and timetable of the project. The first excavations are due to take place in September. Katherine West, curatorial assistant at Petersfield Museum, said: ‘This project will uncover the history of one of the most impressive and complex Bronze Age burial grounds in the south-east of England.