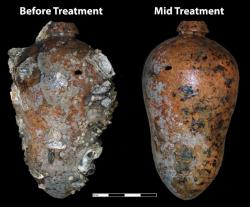 Patuxent River - On March 25th, watermen from Solomons Island Heritage Tours and Patuxent River Seafood recovered an 18th-century Iberian Botija/Olive Oil Jar from the Patuxent River. This amazing find was pulled from the water by their oyster tongs and is in remarkably good condition. The jar, standing almost two feet tall and shaped like a ribbed carrot, was heavily encrusted in oysters, barnacles and other marine life. Conservators at the Maryland Archaeological Conservation Laboratory (MAC Lab) have begun removing these encrustations and will continue to treat the object so that it can be made ready for study and display. While the MAC Lab's collections contain fragments of this ceramic type, it is very rare to find a complete vessel. The Spanish, Italians and Portuguese used this type of jar to transport olive oil to their colonies in Florida and further south. Recovering such an intact artifact in the waters of Southern Maryland is particularly interesting to archaeologists.

Ainsdale- Largely hidden by the shifting sandbanks, the Star of Hope lies south of Ainsdale, exposed at low water, but frequently hidden by the waves of the rising tides. The Star of Hope was wrecked in 1883 in atrocious conditions as it approached Liverpool from Wilmington in North Carolina with a cargo of cotton. Some sources indicate that in force 10 gales the Star of Hope collided with another vessel before her crew escaped the stricken craft to take refuge on the Crosby lightship. Unmanned, the Star of Hope then met her fate in the terrible storm, coming to rest on the sands south of Ainsdale, where she has since become a familiar local landmark. Surprisingly little formal surveying has been compiled on the remains of the Star of Hope, so an “Adopt-A-Wreck” scheme is now being launched by Sefton Coast Landscape Partnership with the help of the Nautical Archaeology Society. Over the weekend of May 9 and 10, experts from the Nautical Archaeology Society will be offering a free two day course for those who want to help survey the wreck, learn more about her and protect the site. 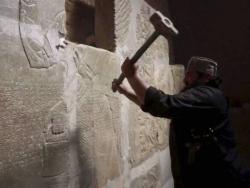 Nimrud - Daesh militants hammered, bulldozed and ultimately blew up parts of the ancient Iraqi Assyrian city of Nimrud, destroying a site dating back to the 13th century BC, an online militant video purportedly shows. The destruction at Nimrud, located near the militant-held city of Mosul, came amid other attacks on antiquity carried out by the group now holding a third of Iraq and neighbouring Syria in its self-declared caliphate. The attacks have horrified archaeologists and UN Secretary-General Ban Ki-moon, who last month called the destruction at Nimrud “a war crime.” The seven-minute video, posted late Saturday, shows bearded militants using sledgehammers, jackhammers and saws to take down huge alabaster reliefs depicting Assyrian kings and deities. A bulldozer brings down walls, while militants fill barrels with explosives and later destroy three separate areas of the site in massive explosions.