Zorats Karer - Known as the “Armenian Stonehenge,” Zorats Karer or Carahunge is a prehistoric archaeological site near the town of Sisian. This famous megalithic structure consists of hundreds of vertically arranged two-meter stones or menhirs that are stretched from the south to the north. Archaeoastronomers suggest the standing stones could have been used for astronomical observation. Seventeen of the stones were associated with observations of sunrise or sunset at the solstices and equinoxes, and 14 with the lunar extremes. Research by radiophysicist Paris Herouni and his research team in 1994–2001 led them to the now disputed conclusion that Carahunge is the world’s oldest astronomical observatory.

Lorestan - A group of cultural heritage and environmental activists have proposed to introduce the imprinted image on a 4,000-year-old stamp, found in western Lorestan province, as a symbol of the country's environment protection. A moulage of the ancient stamp, called Virdar (an ancient name meaning guardian), has been made by Amir-Hossein Kulivand, an artisan from Lorestan. Given that Iran’s environment has not a historically valuable symbol, this 4,000-year-old stamp can be regarded as the logo of the Department of Environment (DOE), researcher and archeologist Ata Hassanpour, told ISNA. The stamp depicts a man who has embraced two wild goats sympathetically and protected them from lions and leopards, he said, adding, this picture shows protection of animals, which was common among Iranians over the long sweep of history, he explained. The cylindrical stamp is made out of limestone, which is about 4 centimeters long with a diameter of 2 cm, which goes back to the late second millennium and early first millennium BC, he added. “The stamp can have a message to today's generation that our ancestors played roles in protecting animals they have not always been hunting and feeding, while in specific seasons such as the birth season known as "Verda" (meaning hug of mother) hunting was avoided, he concluded. 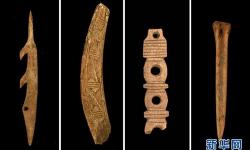 VIET NAM - Lien Khe  - Agencies in the northern coastal city of Hai Phong have filled in three excavation holes in Cao Quy field, Lien Khe commune, Thuy Nguyen district, where dozens of 13th century stakes were unearthed in November 2019. Do Xuan Trung, Director of Hai Phong Museum, said at present local scientists have no proper way to preserve the 36 stakes found in the field. “We decided not to excavate any more in the field, but examine surrounding areas,” he said. Between November 27 and December 19, the Vietnam Archaeology Institute in co-ordination with Hai Phong Department of Culture and Sports and Hai Phong Museum excavated three holes over a total area of 950sq.m. They found 27 firm dark-red wooden stakes buried in silt. All the stakes’ heads were broken. On the stakes, there are traces of nails for tying up string. According to radio carbon dating, the stakes were made between 1270 and 1430 AD. Scientists initially concluded that the field was on a stream leading to Bach Dang River, with big and small wooden stakes installed alternatively creating different layers. The site might have been part of a trap made by the Dai Viet [then Vietnam] army to repel Yuan-Mongol invaders’ boats in 1288. The stakes would have been deployed by Tran Dynasty (1226-1400) fighters as a trap to destroy enemy boats and divert them to follow their planned waterway to Bach Dang River, where another stake trap was installed to completely defeat the enemy boats. Dai Viet army won the battle that time, which was a historic victory to weaken the Yuan-Mongol empire and prevented them from invading Japan and Southeast Asia, according to historians. The empire invaded Dai Viet three times (1257-1258; 1284-1285 and 1287-1288), and lost it all. Traces of the same wooden stakes have been found in Yen Giang, Dong Van Muoi and Dong Ma Ngua in northern province of Quang Ninh./.