Phanagoria - An ancient Greek altar untypical of Greek colonies on the Black Sea coast has been unearthed at the site of the antique city of Phanagoria on the Taman Peninsula in Russia's southern Krasnodar Territory, Vladimir Kuznetsov, who leads the Phanagoria archaeological expedition, told TASS on Monday. "The complex is dated back to the mid-6th century B.C., or the period when Phanagoria was founded," he said. "This rarest find is one of the oldest and most unique ancient Greek sanctuaries in Russia. As far as I know, such complexes have not been found anywhere else on the Black Sea coast. Moreover, they are quite rare for the Mediterranean region in general," he said. "The layout of this altar is absolutely unparalleled - there have been found no other similar altars with so highly specific elements." The clay-brick building was entrenched in the natural soil layer to a depth of two meters. A stairway leading from the vault ended in a small platform in front of a rectangular altar made of bricks. An 80 cm diameter bowl was placed at the edge of the altar and a deep pit was dug near it, with the altar’s surface and the pit’s verge showing traces of fire and ash. "The complex requires serious study and our task is to try to understand how this structure functioned," Kuztensov said, adding that archaeologists believe the building used to serve as a sanctuary dedicated to gods associated with the underworld. According to archaeologists, the altar was used to place a sacrifice on it, with the blood trickled to the bowl so that it would not be sprinkled on the altar. The pit, judging by the bone finds, was used to dispose of flesh. The ancient city of Phanagoria was founded on the Taman Peninsula in the mid-6th century B.C. by the Greeks. For a long time, it was one of the two capitals of the ancient Kingdom of Bosporus (beginning from the 5th century B.C.), the most ancient state in the territory of today's Russia. The Greeks were driven out of the Taman Peninsula by the bellicose Hun tribes in the 4th century A.D. Archaeological excavations at the site have been conducted since the 19th century.
http://tass.com/science/1020851
BULGARIE –

Novgrad - Several days ago, archaeologists from the Bulgarian-German archaeological expedition near Novgrad, Tsenovo, in the central part of Northern Bulgaria, came across a tomb pit with a small human skeleton in a strange position: on their belly, with their legs bent. The working hypothesis of the specialists from NAIM to BAS and the University of Tübingen is that it is a representative of the local Thracian population from the first half of the first millennium BC, from the early Iron Age. Ceramic pots are also found to help with a more accurate date. The find is very interesting, as preserved funerals from this period are rare in the territory of present-day Northern Bulgaria. According to the preliminary conclusions of Assoc. Prof. Dr. Rousseva of the Institute of Experimental Morphology, Pathology and Anthropology at the BAS, there is a skeleton of a 7-year-old child living with health problems. There are organic traces of tape on his skull - a possible dressing or decoration. The place was chosen not by accident - there is a long-standing study (still by an international team) Roman castle Jatrus at the mouth of Yantra river. The main purpose of the expedition is now to trace what has happened to these lands since the 1st millennium BC. until I millennium BC. The period covers the life of the Thracian tribes and the establishment of the Roman power, as well as the transition to the early Middle Ages and the creation of the Bulgarian state. 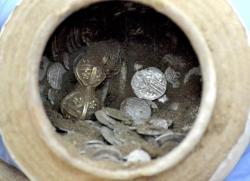 Kaliakra Cape - A fourteenth-century A.D. pot containing nearly 1,000 gold, silver, and bronze coins and artifacts such as buckles, earrings, rings, and buttons was discovered in the medieval Kaliakra Cape Fortress, which is located on Bulgaria’s northern Black Sea coast. Archaeologist Boni Petrunova of Bulgaria’s National Museum of History said the small, light coins reflect the decline of the Second Bulgarian Empire and Byzantium. For example, the 20 hyperpyrons, or late Byzantine gold coins, in the collection had been clipped, or made smaller by shaving metal from their circumference, to such an extent that it was difficult to identify them. Eight Venetian gold coins dating to the mid-fourteenth century were also found in the pot, along with a few coins from Wallachia, a Bulgarian ally to the north, and a single Tatar coin, all of which may have flown through local markets. The objects are thought to have been looted by a Tatar leader who quickly hid his treasure during one of the last Mongol invasions of the region, since there were still threads attached to the buttons, suggesting they had been ripped off a lavish garment in a hurry. 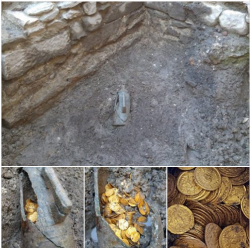 Como - Hundreds of Roman era gold coins have been discovered on the site of an old theatre in northern Italy, the Ministry of Culture announced. The perfectly-preserved coins, which date back to the end of the Roman Empire in the 5th century, were found in a stone urn in the Cressoni theatre basement in the city of Como.

Al Ain - A mosque, believed to be 1,000 years old, has highlighted what the UAE was like when the religion of Islam came to its shores. This was a period of time which ushered in a wave of change across the area that is now known as the UAE. The new religion brought with it a set of values and beliefs that have since defined the history of the country. Close to the construction site of the Sheikh Khalifa mosque in Al Ain, DCT Abu Dhabi archaeologists discovered several falaj (irrigation waterways), at least three buildings and, more significantly, a mosque which dates back to Islam's early golden age of the Abbasid Caliphate - 1,000 years ago. The mosque is the earliest yet discovered in the UAE. Experts have revealed that the buildings at the site, made from mudbrick, are the remains of a small fortress and several other structures. People living in these buildings would have obtained fresh water from several falaj that they constructed around the settlement. Falaj technology has a deep history in Al Ain, stretching back 3,000 years. In the early Islamic period, the people of Al Ain improved the existing technology by using fired bricks to ensure the stability and durability of the underwater channels. When excavated, these falaj were still intact. But the archaeologists believe it is the discovery and excavation of a mudbrick mosque that places Al Ain on the global map as an important centre during the early Islamic period.  Fragments of pots, which were likely used for ablution (ceremonial washing) and other ritual purposes, were found inside the mosque and date from the 9th to the 10th Centuries CE. These discoveries and a radiocarbon date from one of the nearby falaj confirm that the mosque is the earliest yet discovered in the UAE.
VIDEO =   https://www.khaleejtimes.com/news/general/photos-1000-year-old-mosque/-discovered-in-uae

Eleutherna - Potterymaking in ancient Greece was a male-dominated profession, but about 3000 years ago, one woman from the island of Crete broke the mold to become the only known female master ceramicist in antiquity. The finding, based on a lengthy biomechanical analysis of her skeletal remains, sheds light on the elevated roles played by women in at least some parts of the classical world. The master potter, who lived to be about 45 or 50, was buried in the city of Eleutherna on the slopes of Mount Ida, the legendary birthplace of Zeus. Ornate pottery in nearby graves suggests she lived between 900 B.C.E. and 650 B.C.E., after the fall of the Minoan and Mycenean civilizations (depicted above) and toward the end of the so-called Greek Dark Ages. On closer examination of her bones, archaeologists noticed some intriguing details: Compared with other women at the Orthi Petra burial site, she was unusually muscular, especially on the right side of her body. She had also worn out the cartilage in her knee and hip joints, which would have made moving a painful, bone-scraping affair. Curious as to what repetitive, lifelong motions would have led to that kind of wear, the researchers began to analyze the biomechanics behind the different professions of ancient women, pantomiming the motions with a human skeletal model and observing which muscles were involved. They tried clothes washing, bread baking, harvesting, and loom weaving—nothing panned out. Expanding their search beyond traditional female roles, they tried throwing pottery. As luck would have it, the daughter of a modern-day master ceramicist—and a potter in her own right—just minutes from Eleutherna agreed to model for the scientists. Analyzing her muscles as she worked, they were convinced that her profession was a match for their ancient artisan. Constantly flexing her leg to turn the kick wheel would have worn out her joints; repeatedly leaning to one side of the spinning clay to shape and sculpt it would have developed the muscles on that side of her body, the researchers reported at a May conference on Crete. Her lifetime devotion to the craft likely meant she was a master, the researchers say, blazing a trail for female ceramicists that continues on the island today.