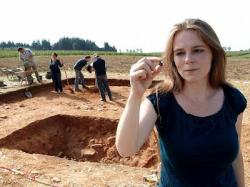 Hermeskeil - The remains of a Roman military camp in Germany have been linked to Julius Caesar, making it the oldest Roman site in the country. The ruins, near the present-day town of Hermeskeil in western Germany, was first associated with the Romans in the 19th-century but was thought to date from long after Caesar. In her first public presentation on the site, archaeologist Sabine Hornung explained on Monday how more than 70 rusty studs from the soles of sandals were discovered in the cracks between the cobbles of the camp gate, evidence that connects the site to the time of Caesar. Although there is no proof the general ever visited the camp, his forces had massed at the site during the Gallic War, in which Caesar conquered the Celts and extended Rome's territory to the English Channel and the Rhine River. "It's so lucky that we found these nails here," she said. "This moment in world history is now archaeologically accessible." The nails, resembling drawing pins, occasionally fell out as soldiers walked. They can be precisely dated to the Gallic War period, along with lost coins and fragments of broken pottery in the camp's rubbish tip. Much of the site has been levelled under fields growing maize, but a several metres high earthen wall, built by Roman soldiers with their spades, still exists in nearby woods. "To see remains like this of a Caesarean military camp is unique," she said. "It's incredible good luck to have found it." The Romans evidently picked the 26-hectare site - big enough to accommodate 5,000 to 10,000 soldiers - because it has its own spring. Hornung said she was still looking for evidence that the unnamed camp was constructed as a springboard to attack a major hilltop Celtic stronghold five kilometres away. "We would like to find catapult ammunition, because the commanding general's name might be embossed on it," she said. A dig at the site is expected to continue for five or six years. 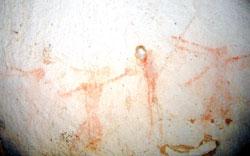 Ha Giang - Archaeologists recently found something unique in the northeastern province of Ha Giang: a set of five stone hoes dating back to 4,000 years ago. The set was first unearthed accidentally by family members of Nguyen Van Hoi in Yen Minh Town when they were preparing to build a house. The stone hoes were carved in quadrangle form and polished smoothly. The hoes were found displayed next to one another with traces of burnt coal nearby. After examining them carefully, scientists confirmed that the tools were made of hard riolit stone, which is abundant in the area. The tools measure 18cm in length and 7cm in width and are 2.5cm thick. Based on traces on the tools and their chipped edges, experts believe that they were tied to sticks, which served as handles, and used for quite a while. Scientists are still examining the surrounding area. Prof Trinh Nang Chung, head of the Research Department of the Viet Nam Archaeology Institute, confirmed that the tools were from the Late Neolithic - Early Metal Age, 3,500 to 4,000 years ago. "The finding marks the use of stone hoes in agriculture at the time, which was suitable to farming conditions in the local [Dong Van] karst plateau," Chung told Viet Nam News. The Dong Van karst plateau of Ha Giang Province covers four districts: Dong Van, Meo Vac, Yen Minh and Quan Ba. In the same expedition, the scientists examined drawings in Kho My Cave in Tung Van Commune of Quan Ba District. The paintings depict human figures with two horns on each head dancing with their arms open. They were found on the cave wall 30m from the cave gate, within the reach of a normal adult. Chung said the sketches were made with powder from local dark red stones mixed with resin and water. Yet the date of the paintings was still being researched, he said.

ROYAUME UNI – Stortford - A henge – or Prehistoric monument - may have been unearthed on the outskirts of Bishop’s Stortford. A report by the county council’s historic environment unit says: “Although these investigations are still ongoing (some of the trial trenches are visible from the Bishop's Stortford bypass and Farnham and Hazel End Roads), some interesting archaeology has been identified in both prospective development areas. “Interpretation is tentative at this stage but the Hazel End site, involving trenches on both fields alongside Hazel End Road, has identified the remains of a probable burial mound, of Late Neolithic (c4500-2500BC) or Early Bronze Age date (c2500-1700BC) several ditches, pits and post-holes of probable Bronze Age date, and, in the lower field next to the River Stort, a roughly cobbled surface covered with Late Iron Age and Roman pottery. “Investigations within the larger area, enclosed by the bypass, have identified an enclosure and ditches of probable Iron Age date (c800-100BC) an enclosure of possible Roman date (further excavation may clarify this) and also another prehistoric burial or possible henge (a ritual enclosure) of late Neolithic or Early Bronze Age date (c3000-1700BC). “This circular, ditched feature appears to contain several cremation burials in the ditch and it has a central feature that may also be a burial. If so, it is potentially, an important find.” The finds would have to be excavated in detail and recorded before new homes could be built.  Alternatively they could potentially be protected and preserved – barring new construction. 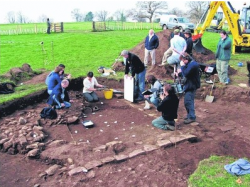 Tamworth - Maybe they could unearth remnants of King Offa's Dyke, an ancient town defensive ditch and rampart system which protected the townsfolk from unwelcome visitors in the 8th century? Or perhaps they could attempt to pin down the location of Offa's famous Tamworth palace?  If successful, that indeed would be a discovery of national importance. Modern thinking seems to point to the site as probably being beneath the parish churchyard on the north side of St Editha's Church. This, of course, makes it an impossible site to properly excavate. But just a few yards away is a site that is just waiting for people who really know what they are doing to put a serious shovel into the ground. It is mostly rear gardens today, but in the reign of King Henry VIII the area between St Editha's churchyard and Lower Gungate was a magnificent ecclesiastical Deanery. The site extends from the rear of the Stone Cross pub to as far as Little Church Lane. Of the once magnificent building, all that remains above ground are two parallel walls of rubble masonry. A section of one of the remaining walls – dating back as far as the 12th or 13th centuries – today forms part of a picturesque row of shops in Lower Gungate.  Sections of the other parallel wall can still be seen at the rear of the Cash Converter business and neighbouring Stone Cross pub in Church Street. Beneath the pub – one of the oldest in Tamworth – is a superb stone-built cellar of two bays, vaulted and groined with moulded ribs, having late 15th or early 16th century Tudor rose bosses. The cellar probably belonged to a large house and not to the Deanery although, conceivably, the house may have been connected with the latter. The main entrance to the Deanery was probably in Lower Gungate, roughly at the site of two houses at the rear of the former Arts Centre (now the town's registry office). 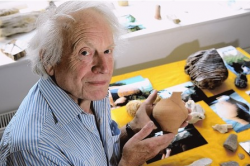 Sanderstead - A keen amateur geologist has spoken of his delight at unearthing Roman and Stone Age artefacts in his own back yard. Grahame Quiney says he was amazed to find two Mesolithic hand axes and a Roman urn among other items around his property in Blenheim Gardens, Sanderstead. Mr Quiney's other finds include a further broken hand axe, also from the Mesolithic era – between 7,000 and 12,000 years ago – and a flint chip from that or the later Neolithic period. He has also unearthed a rim of a Roman bowl from the late fourth or early fifth century – the final phase of the Roman occupation of Britain. An archaeologist from Surrey County Council said the findings from vastly different eras may, in fact, be connected. 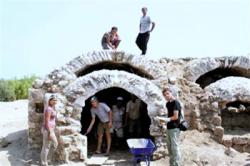 Elaiussa Sebaste -  An ancient bath from the Roman period has been found during excavations at the Hellenistic city of Elaiussa Sebaste in the southern province of Mersin’s Erdemli town. The 18th term excavations continue at the ancient city under Prof. Eugenia Eugini Schneider, the head of Rome’s Sapienza University Archaeology Department. Schneider said that the ruins of the Roman bath were very big and open to the public. Excavation teams are currently working on five different points in the area Prof. Emanuella Borgia, deputy head of the excavations said. “The 1800-year-old Roman bath is the most striking find this year. The bath has three rooms and is about 50 square meters. We have focused on the Big Bath, Byzantine Church, Small bath, Old Lantern, Byzantine Palace and settlement area. We are working with a team of 25 archaeologists and 30 workers,” Borgia said. She said that the area’s theater and agora would be illuminated in this year’s work and that the Byzantine Palace would be open to visitors. Excavations will end Oct. 19.