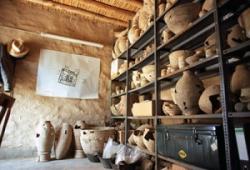 Tell Sabi Abyad - Archaeological finds collected over 25 years by Leiden University researchers in Syria may have been plundered, the University announces.  Between dozens and hundreds of boxes of artifacts were taken in “a dramatic development for 25 years of Leiden research”, says Peter Akkermans, Professor of Near Eastern Archaeology. The archaeological team has been busy with excavations on the Syrian site Tell Sabi Abyad since 1986. Their finds were stored in depots were stored in provincial capital Raqqa, in the North of Syria. Due to tensions during the civil war in the region, their research activities had to be abandoned in 2011.Artifacts found in the archeological dig included 6000-year-old pottery, art objects as well as animal and human remains. The Leiden team shared depots with English, American and German researchers.Recently, the Syrian Archaeological Service sent out an announcement that armed men had plundered the repositories. The service was not able to specify what or how much was stolen.

INDE - Chandrawati -Dedicated Freight Corridor Project, an infrastructure initiative by the Ministry of Railways, is feared to get entangled with ruins of an ancient civilization, which has led to a tiff between the ministry and the Department of Archaeology and Museums, Rajasthan.The ancient site of Chandrawati, a land spread over 45 hectares in Abu Road of Sirohi district, has some its portion falling in the acquisition of the railway department, where a rail line has been proposed as a part of an industrial corridor. The fort is a part of ancient Chandravati township, which probably may have been the residence of the erstwhile rulers. It's surely a very precious monument of our heritage, which will be destroyed, said Kharakwal. Jeetendra Soni, ADM, had also written a letter to the railway department asking them not to mess up with the land falling under the excavation site to save the heritage site from being destroyed further.

Grunwald  - Where exactly was the Grunwald battle fought, and is there a chance to find the graves of the knights at Grunwald - archaeologists will look for answers to these questions in autumn. The study will be a joint project of researchers from Poland, Denmark, Norway and Lithuania. Museum of the Battle of Grunwald has just signed an agreement to carry out research with the Danish historical association Harja from Odense. The search will begin in September."Under the agreement, Danish and Norwegian members of the association will assist archaeologists in the search of the exact location of the battle of 1410. Director of the Museum of the Battle of Grunwald Szymon Drej told PAP that scientists expect that this year’s search will help verify hypotheses concerning the location of the battle of 1410. So far it is not known exactly where the battle of Grunwald took place. According to written sources (Jan Dlugosz chronicles), one of the most important places of the battle was the Great Stream Valley, and the search will focus on finding this place. The first serious archaeological research Grunwald was conducted in 1911 and associated with the search for mass graves in the church in Stębark.Drej explained that at the time archaeologists selected 30 locations on the alleged battlefield area of 15 July 1410, that is, between the villages Stębark, Grunwald and Łodwigowo, and beyond. It was decided to also explore the areas, which the two armies coming to the battlefield were believed to cross, including primarily the Polish-Lithuanian town Dąbrówno, burned down before the main battle, the Teutonic Knights fortress in Gardyny, as well as the places some historians believed to be locations of Polish-Lithuanian and Teutonic camps. In the 1960s, about 200 skeletons were discovered in the vicinity of a Teutonic chapel. They bore traces of injuries. Some of the discovered the remains came from secondary burials, meaning that they were transferred from other places. Most likely, according to Drej, they were the remains found over time on the battlefield during the field work and transferred to the "consecrated ground" in the vicinity of the chapel. 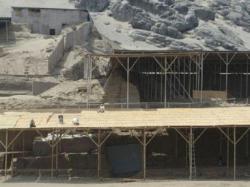 Cusco - The city of Cusco is facing yet another occurrence of graffiti at a historical site this week. Early Sunday morning, a vandal, armed with red spray paint, what appear to be his or her initials on Cusco’s famous twelve-angled stone. The twelve-angled stone, located in the historical center of Cusco, is an icon of pre-Hispanic Peruvian architecture, embodying the exactitude with which Inca masons cut blocks in order to ensure a perfect fit with surrounding stones. It is a common destination for tourists exploring the historical sites of the city. According to El Comercio, authorities are eager to catch the perpetrator of the crime, who was caught on security camera defacing the stone.

Glenrath -At a packed meeting in the Eastgate Theatre the Arthur Association announced the results of the 2013 archaeological excavations in Manor Valley. -The site covers 32 acresin Glenrath where outlines of ancient houses, yards and fields remain clearly visible. It is one of the most extensive settlements of its kind in Scotland and has survived, because after it was abandoned, the land was never ploughed. On the basis of archaeological evidence to date, it was generally believed that during the Roman period, ancient hill fort settlements were gradually abandoned and people moved down to live and farm in the valleys. A previous excavation in 1941 dated a cluster of roundhouses in Glenrath to around the Roman Iron Age (100-200 AD). Last summer the whole site was surveyed and a roundhouse chosen for excavation because it may have been later than the Roman period It was about nine metres in diameter with a cooking hearth near the centre and it gave the impression of having been occupied over quite a long period. A fragment of a shale bracelet suggested that the occupants had access to exotic goods. However radio carbon dating of finds and soil samples has subsequently turned the accepted archaeological dating for this Borders site on its head - it turns out that the house was built in around 1500 BC during the Bronze Age. A second building was also excavated. This was unusual in that it was rectangular rather than circular, and it proved an enigma. It appears to have been built in around the 11th or 12th century AD and augmented over the following centuries. Underneath this mediaeval building were traces of earlier activity stretching back to the pre-Roman period around 700-400 BC. So it seems that the location was used for over two millennia. But what was it – a byre or perhaps a food store? A similar building lies close by and this may help to provide the answers.