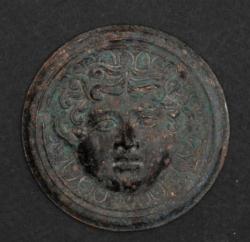 Eordea - The skeleton of a woman who lived in the 1st century BC lying on her bed was uncovered by archaeologists recently near the city of Kozani, northern Greece.The discovery was made in Eordea, Kozani. Archeologists say that the remains probably belong to a wealthy woman. Symbols for the Greek god Apollo were decorating her bed. One of the extraordinary objects excavated at the lignite mines was the bed and remains of a 1st century BC woman. Although there is evidence that people were often buried in their beds in ancient times, this was the very first time archaeologists excavated someone buried that way in Greece. Dr. Hondrogianni pointed out that during other excavations, bed accessories have been found but this is the first time an entire bed had been preserved. In 2020, an attempt was made by specialists at restoring the bed. Most of the bed was made of bronze, which is why it survived over the millennia. The wooden parts of the bed had unfortunately decomposed prior to being excavated. The identity of the woman whose remains were found continues to be unknown. However, she is notable due to her wealthy—and perhaps royal—status. Luxury objects were found buried around the woman, and she herself was found with golden laurel leaves around her head. Archaeologists believe that these may have been woven into a wreath for her to wear. The woman was middle-aged and is theorized to have belonged to a royal family, as there have been other archaeological discoveries in the wider area that point to royalty having settled there. However, there is also the possibility that she was someone with great religious authority, which would also explain the wealth of the objects buried with her. The ends of the bed were decorated with the heads of mermaids, but the decorations adorning the top of the bedstead hold particular significance. This part of the bed bears the symbol of an aquatic bird holding a snake in its mouth, a known symbol for the god Apollo because of the Greek myth which recounts him having killed the snake in Delphi, subsequently saving the world. The laurel tree and leaf is also sacred to Apollo, meaning that the leaves found on the woman’s head may have also been symbols for Apollo. Archaeological findings in nearby Mavropigi show the remains of a sanctuary for Apollo. Hvar - The gardens of a seventeenth-century Croatian palace were the unlikely setting for the recent discovery of an ancient necropolis where human remains were found buried in ceramic jars. In June 2021, archaeologists unearthed a vast ancient necropolis, or burial ground, which dates back to some time between the fourth and fifth centuries AD when the area was still populated by Greeks who had settled there after having come under the control of the Roman Empire some time prior. The beautiful Croatian island of Hvar has been continuously inhabited since the early Neolithic period. Greek settlers were the first to have founded colonies there as far back as 385 BC. The researchers stated in an announcement that they had discovered a total of twenty graves in the necropolis, along with the skeletal remains of 32 individuals, in an area measuring 700 square feet. In the course of their dig in the Palace gardens, archaeologists also uncovered a fragment of a stone wall dating back to the second century AD and a city gate which they believe is from the late fifth century.

Kukruse - Bones and antiquities found in the village of Kukruse suggest that the people of Northern Estonia and those living on the southern coast of Finland had close trade connections with each other, as long as 800 years ago. What was the language spoken among the Kukruse people? We know Kukruse is geographically located in northeastern Estonia, and in the 12th-13th centuries, around the time Kukruse people lived, who carried a similar material culture and probably spoke a similar northern Estonian language lived further to the west of the village of Kukruse. To the east of Kukruse village, however, a lot of archeological material typical of Votian culture has been found, which is why it can be assumed that the Votian language was spoken there. More objects similar to the western finds were found in Kukruse cemetery, but also some Votian-like objects. Therefore, it can be assumed that the village was bordering between two language groups. Apparently, Kukruse people spoke northern Estonian, but their vocabulary may have been intertwined with loan words from the Votian language. Did they distinguish between two different languages? What is certain, however, is that their language was rich - the material finds at the cemetery are abundant, and all these objects of their material culture had to have a word assigned to them. To make sense of the lives of people who have lived in the past just a few details are not enough; it is also necessary to grasp the entire socio-cultural background and their value-system. Genetic data allows us to determine several early migration patters: For example, the movement of Finno-Ugric people from their origins in the Ural Mountains to the Baltic Sea. We can see from the remains of the man from Kukruse that in his veins flowed both the blood of hunter-gatherers and Baltic Finns. Stable isotopes analysis of bones and of fat molecules found on cooking pots help to recreate their diets and daily lives. In the case of the lord of Kukruse finding and also other men excavated from the cemetery, what becomes evident that fish was an important part of their diet. However, the village of Kukruse was not a fishing village. Their life as farmers  is also confirmed by the food of Kukruse women that consisted primarily of land products such as milk and porridge. Thus, the role that Kukruse men played in their village took them on frequent expeditions, where the most easily available food was fish. According to one theory, the men of Kukruse crossed the Gulf on the southern coast of Finland in search of trade partners. This means that they crossed the bay with items of interest to the people of the other side or brought something of their liking back.

Weymouth - Remains of one of the very earliest homes to have been built in what was to become Weymouth have been unearthed. Experts describe the discovery of the back wall, yard and well of the late 13th century medieval house as 'particularly significant'. Also found the back wall of an early 19th century chapel, along with foundations to support a balcony when the building was the Theatre Royal in the mid 1800s, part of the grand entrance to the theatre and a theatre wall to support tiered seating for the cheap seats.  Archaeologists concluded that the 13th century house was a a wooden building built on a stone foundation slab and probably had a slate roof with decorated ridge tiles. The house would have had a long back garden gently leading down to the shoreline. By the 16th century, the back garden of our medieval house was built on, and old records show that this included three cottages that were known for holding religious meetings.

Hamidiya - An archaeological mission succeeded in uncovering a large number of rock tombs, during the implementation of the archaeological documentation and recording project for the rock tombs located in the Hamidiya cemetery in the eastern mountain in Sohag. The discovered tombs are of various types, are dug in several levels in the mountain, and include tombs with a well, several burial wells, or with a ramp that ends in a burial room. Those tombs date back to periods ranging from the end of the Old Kingdom to the end of the Ptolemaic period. Among these tombs is a cemetery dating back to the end of the Old Kingdom, consisting of an entrance that leads to a transverse hall, and a burial well in the southeastern part. It is a ramp leading to a small burial room, and the well was reused in later eras. The cemetery is characterized by the presence of an imaginary door with the remains of hieroglyphic inscriptions and illustrations of the cemetery's owner slaughtering sacrifices, and other people making offerings for the deceased. The excavations in that cemetery also resulted in the discovery of many pottery vessels, some of which were used in daily life, and others were funerary. They are small pots in spherical form, with remnants of yellowish paint on the outside. Among the vessels discovered were also many alabaster utensils, pottery utensils, the remains of a round-shaped metal mirror, many shards of pottery, and pieces of limestone with inscriptions that may represent the funerary paintings of the tombs' owners, spanning back to the Sixth Dynasty. 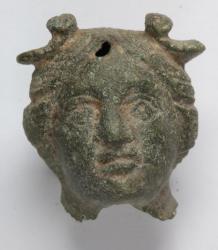