Southport - The Star of Hope was wrecked in 1883 in force 10 gales as it approached Liverpool from Wilmington in North Carolina with a cargo of cotton. Her crew escaped the stricken craft and the ship came to rest on the sands. John Dempsey, project officer with Sefton Coast Landscape Partnership, which promotes the heritage of the Sefton coast, said: “We are hoping the Adopt-a-Wreck weekend will allow people to get to know this fantastic wreck and help protect it in the future.” For more details, call Sefton Coast Landscape Partnership on 0151 934 2964, or email landscape.partnership@sefton.gov.uk

- When archaeology volunteer Margaret Wong pulled large ceramic pieces from the soil at an Empress Place excavation site near the Singapore River, she knew by their weight and smooth texture that they were centuries-old jade green fragments of high quality. But the enormity of her find sunk in only after Chinese porcelain expert Tai Yew Seng, who had been digging nearby, recognised the fragments as imperial-grade ceramics produced between 1368 and 1398. The pieces, which formed a 34cm diameter platter, turned out to be one of the most significant artefacts unearthed from the two-month dig that wrapped up last month. Such ceramics were bestowed by China's Emperor Hongwu of the Ming Dynasty only on overseas leaders from countries such as Siam (Thailand) and Champa (Vietnam), according to Dr Tai, a professor at the Nanyang Technological University's Confucius Institute. This led the team to believe that ancient Singapore, or Temasek as it was known, could have had an established government with a head ruler or chieftain as early as the late 14th century. Another platter of a similar design dating back to 1381 lies in Syria. The dig unearthed three tonnes of artefacts - the largest archaeological haul in Singapore in 31 years.

Loharehri -  A small baoli that was discovered five years ago in Dwarka has been restored. The project took about eight months of rigorous work. "Once we started excavating, we found the depth of the monument was more than we thought. About 34-55 steps were discovered. This was more than what was mentioned in the 1910 listing of this monument by Zafar Hasan, 22," said an official. Since the baoli got filled with waste and vegetation over the years, this hadn't been evident. Also Hasan had located it in village Loharehri.Once we reached the floor of the baoli, we made another interesting discovery. The kuchcha area at the base had an octagonal well. This was a unique discovery and rare to find in baolis," said an official. The newly conserved baoli has been fenced but visitors will be given access. An information board with details of the site is in the process of being installed.
http://timesofindia.indiatimes.com/city/delhi/Delhi-Dwarkas-Lodi-era-baoli-restored/articleshow/47218940.cms

Gedera - A statue that may represent a fertility goddess and a figurine of a full-figured woman were unearthed during a rescue dig in south-central Israel. The statues, estimated to be 7,000 years old, are similar to figures from the Yarmukian culture that are usually found in northern Israel. The culture in southern Israel at this time had been labeled the Jericho 9 culture. “I think that in the end this is one culture with difference in the way pottery is made. It seems they had a single system of beliefs,” Edwin van den Brink of the Israel Antiquities Authority told Haaretz. He and Yitzhak Mermelstein are in charge of the excavation. “The question is whether the figurines represent a single ritual world in which there is an image with a bountiful chest, wide hips and maybe pregnancy. The most important question is whether the figures were made in the south or brought from the north,” Marmelstein added. Chemical tests of the clay used to make the figurines could provide the answer to that question.

South Carolina - Moses, an assistant professor of anthropology and archaeology, is investigating the site of the Hume Plantation’s slave quarters on South Carolina’s Cat Island, specifically looking for items related to rituals and spirituality.  “I’m investigating ritual practices where slaves placed ritual magic deposits beneath their cabin floors to protect themselves from their European masters and for curative purposes,” Moses said. Some slaves participated in Hoodoo practices interspersed with Christian beliefs that they had been exposed to while still in Africa. Hoodoo magic, with its Native American and European influences, involves the use of spells and homemade charms. The Hume Plantation is an artifact rich site with pre-historic and historic-period deposits from Native Americans, Europeans and Africans. Early in the plantation’s history Native Americans were used as slaves and later mixed with Africans, whose descendants are referred to as black Indians.  In the late 1600s, slaves were brought in from the Congo and the Jamaican Islands where British Aristocracy operated sugar cane plantations and mining ventures. By the late 1700s, the Hume Plantation owners sought slaves from Africa’s Gold Coast because they were knowledgeable about rice harvesting, the plantation’s primary crop. Each slave group brought unique belief systems and material culture including pottery and personal adornments to the plantation. Moses’ research evaluates the blending of slave cultures and effects on ideas of protection and religious beliefs. The site of the former plantation is on an island that is now part of a wildlife refuge, leaving the artifacts relatively undisturbed. Along with the artifacts themselves, Moses is researching their frequency on the property and their locations. “I’m looking at how they are distributed throughout the slave quarter. There is a hierarchy among the slaves themselves depending on how close they lived to the mansion, which is a typical layout pattern found among many plantations,” Moses said. In addition to ritual deposits in the former slave quarter, Moses has unearthed contraband including handmade weapons, graphite pencils and slate used to teach reading and writing, an illegal activity among slaves because plantation owners feared rebellion. 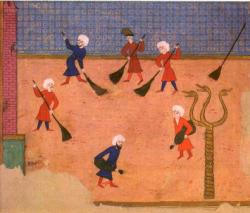 Delphes - A bronze replica of the Serpent Column supporting the tripod of the Battle of Plataea will be built and placed in the archaeological site of Delphi, after the unanimous decision of the Central Archaeological Council. The Serpent Column was initially an offering dedicated to Apollo at Delphi in 447 BC by the 31 Greek city-states which had fought in the Battle of Plataea. The rather complicated task is expected to attract visitors. It also meant to correct a “historic” mistake, which nevertheless proved to be necessary for the survival of the authentic monument. In other words, if the 26ft high bronze column of three intertwined snakes had remained in its initial position and hadn’t been moved to Constantinople by Constantine I the Great in 324, it would have been lost forever. In Constantinople, the Serpent Column was placed in the Hippodrome to decorate the spina (central line). There it stands to this day, a silent witness of the outstanding symbolic value it had for the new capital of the Roman Empire. The fact that it is the only bronze votive which has survived from the Greek Antiquity makes it even more important. The plaster cast of the snake-like support had been crafted in the past and transported from Istanbul to the Delphi Museum –where it remained stored since 1980– following an initiative of Professor Petros Themelis, former Ephor of Antiquities. It should be noted that the engraved inscriptions of the above mentioned Greek cities are preserved on this copy, while on the original column they are not visible, due to oxidation and its long exposure to weather conditions. The bronze Serpentine Column represented three intertwined snakes with the names of the cities which had participated in Battle of Plataea engraved on their bodies. According to Herodotus the column was built using the bronze of the melted-down Persian weapons. The heads of the snakes supported the golden cauldron, that the Phoceans melted to fund the Third Sacred War. From Ottoman miniatures it can be deduced that the column with the three snake-heads had been intact until the 16th century. Only one of the heads survives today, detached from its body, which is not preserved. The head is exhibited in the Archaeological Museum of Constantinople.