Laodicea - The western province of Denizli is home to 2,000-year-old bathes in the ancient city of Laodicea. According to the head of the Laodicea excavation, Pamukkale University head of the Archaeology Department Professor Celal Şimşek, said the ancient city had as much importance as Ephesus in terms of its trade, arts, culture and sports.  He said few of the Laodicea bathes had so far survived and the 12,000-square-meter bath in the south was the largest in Anatolia. “Bathes were prepared at noon for people to wash and later served as a school in the afternoon. They were places for young people at the same time. The bathes also hosted between 20-30 people for private meetings. The bathes were very important in that era because they were the places for meeting and education, as well as trade centers,” said Şimşek, adding the ancient city had four big bath structures and some have been slightly damaged.  He said Laodicea was the center of arts, culture and trade and that Pamukkale University had been carrying out excavations and restorations there for 11 years.  “It was one of the two mega cities in Anatolia. I estimate 2,000 years ago, Laodicea had a population of 150,000. The typical population for ancient cities fluctuates between 40,000 and 50,000. This shows that Laodicea was such a big city. Excavations are ongoing around the Laodicea Church, Holy Agora, Southern Portico, eastern pool and the Empire Septimius Severus Memorial Fountain. 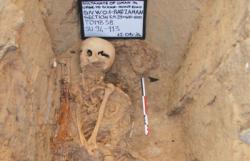 Sinaw  -  In what could be a major archaeological find for the sultanate, a grave - possibly 2,300 years old from the Iron Age and belonging to a chieftain - has been unearthed during excavations at two ancient burial sites in the niyabat of Sinaw in Mudhaibi. This one is said to be oldest found till now at the site. The graves, numbering in  hundreds, were discovered during digging work for the Sinaw-Mahout-Duqm road project of the Ministry of Transport and Communications (MoTC). Till now, the Ministry of Heritage and Culture (MoHC) has finished excavations of 35 graves along the road project site, 22km from Sinaw. A statement by Sultan bin Saif al Bakri, director of Exploration and Archaeological Studies Department, MoHC, said that the graves are spread over 100km and that survey activities were carried out in cooperation with MoTC. The graves, some having pottery and soapstone utensils, are in two clusters. The first mound dates back to the third millennium BC, particularly the transitional era between the Hafeet and Om al Nar periods. The second dates back to the first millennium BC. Bakri called the 2,300 year old burial chamber with the nearly intact skeleton the most important find at the site. It is being believed that the man may have died at age 50. A male and a female camel were sacrificed and buried in adjacent stone-walled chambers. On his right was found an 88cm long sword with its hilt like an eagle’s head, in addition to a robe and conical woollen headgear, suggesting he was a prominent figure. Two daggers were found on either side of his waist. The iron sword and daggers are lined with steel, a style indicating connections to the Indus Valley civilisation where, it is believed, the world’s first iron swords were forged. The technique then spread to other parts of the world including Oman. A detailed study on the weapons will throw light on mankind’s earliest iron sword makers.  The dead man’s head was laid on a pillow, he wore leather footwear and a bronze utensil was found on his left, Bakri said in the statement. 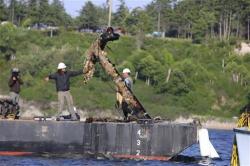 Whidbey Island - Experts will examine an anchor recovered from Puget Sound north of Seattle to determine if it was from one of the earliest ships to explore Northwest waters.The anchor was found six years ago by sea-cucumber diver Doug Monk, who formed Anchor Ventures with amateur historian Scott Grimm to bring it to the surface. It was in Admiralty Inlet off Whidbey Island. The Seattle Times and the Peninsula Daily News report the 900-pound anchor might be the one lost by the HMS Chatham, a Royal Navy survey brig. The ship accompanied the HMS Discovery as British explorer George Vancouver's charted the West Coast in 1792. The anchor was taken Monday to the Northwest Maritime Center in Port Townsend. It will be prepared for shipping to Texas A&M University in College Station, Texas, where experts will try to determine whether it's really the anchor lost 222 years ago.