- Shiloh, Megiddo, Gezer - PALESTINE - Tel el-‘Ajjul  - Archaeologists revealed that they had found the earliest proof of silver being used as money in the Levant, which includes modern-day Israel, Jordan, Lebanon, Syria, and the majority of Turkey. The earliest evidence of silver being used as currency in the Levant dates back more than 3,600 years, which is 500 years prior to previous estimates. According to researchers from the University of Haifa and the Hebrew University of Jerusalem, the silver hoards were discovered during excavations in Israel’s Shiloh, Megiddo, and Gezer as well as Tel el-‘Ajjul in the Gaza Strip. They date back more than 3,600 years, to the Middle Bronze Age, or about 500 years earlier than previously thought. The discovery, which was published in the Journal of Archaeological Science, demonstrates that ancient cities in the region had far more developed long-distance trade relationships and local economies than previously thought. 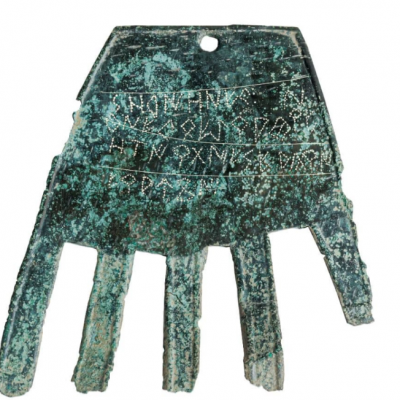 Pamplona - The Basque language is a non-Indo European language in Western Europe, spoken by people living in the mountains between France and Spain. The isolated language has flummoxed scholars for centuries. For many years, it was believed to only be spoken and had shown up in writing about 500 years ago. A recent archaeological find shows that written Basque existed much earlier than previously thought. The artifact was found in the ruins of a castle in Pamplona, t he heart of Basque country . and is called La Mano de Irulegi - the Hand of Irulegi. A flat engraved bronze hand, it has turned bluish - green through oxidation. There are five words etched into it, one of which is recognizable to modern basque speakers.Written in proto- B asque (or Vasconic), the word Sorioneku translates roughly as “of good fortune” or “of good omen.” In modern Basque, it's spelled as Zorioneko.The hand is the oldest example of written basque ever found. It dates back to 72 years before Christ, proving modern Basques’ ancestors lived in the region almost 1 ,000 years earlier than previously thought and is one more clue in understanding the history of the Basque language. 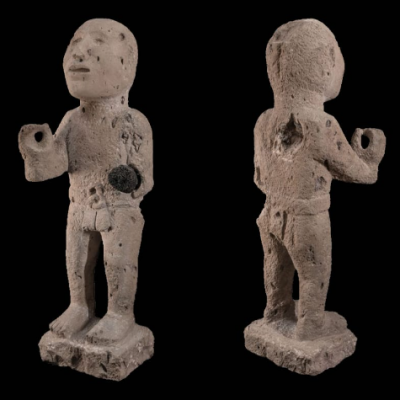 Moyotlan - Moyotlan – meaning “place of the mosquito” in Nahuatl, was a camp (zone) of the Aztec capital of Tenochtitlan. The city was divided into four camps: Moyotlan, Teopan, Atzacualco, and Cuepopan, centred on the ceremonial centre where the public buildings, palaces and temples, including the Templo Mayor were situated.The discovery was made in 2022, when archaeologists were excavating on Delicias street, in the Historic Centre of Mexico City. The statue measures 69 cm’s in height and is an anthropomorphic work from the Late Postclassic period (AD 1200-1521), that may be a representation of the Aztec deity, Xipe Tótec, “Our Lord the Flayed One”. Xipe Tótec was known by many names, including Tlatlauhca, Tlatlauhqui Tezcatlipoca, Yohuallahuan, and Yaotzin. Xipe Tótec was a life-death-rebirth deity, god of agriculture, vegetation, the east, spring, goldsmiths, silversmiths, liberation, and the seasons. Xipe Totec was believed by the Aztecs to be the god that invented war and is often depicted as being red beneath the flayed skin he wears, likely referencing his own flayed nature.

Shinnoye  - Archaeologists have unearthed a kurgan tomb and numerous bronze tools and artifacts from a previously unknown culture. The discovery was first made when workers bulldozed a small hillock during the expansion of the 19th-century Shinnoye cemetery near the city of Krasnoyarsk and unearthed a massive 2,000-year-old tomb containing bronze artifacts from a “newly defined culture.”The team discovered the remains of 50 bodies, buried alongside numerous grave goods, in a large rectangular pit lined with timber and carpeted in birch bark. The tomb most likely had a wooden roof, which was destroyed during the land clearance. The site dates from around 2,000 years ago and belongs to a previously unknown Scythian-type culture. The archaeologists discovered a variety of everyday tools as well as sacred artifacts and weapons that the deceased would have used on their journeys into the afterlife inside the tomb, which was designed to hold about fifty people. There were “miniature symbolic bronze daggers and battle axes” scattered among knives, mirrors, needles, and ceramic drinking and eating vessels. Large bronze beads and plaques were also found, one of which featured a stag, which the lead archaeologist says was a common theme in prehistoric Siberian Scythian art.

Cooper's Ferry site - Archaeologists at Oregon State University have made a significant discovery in Idaho: a collection of stone projectile points that are thousands of years older than any previously found in the Americas. 13 projectile points, which are razor sharp and range in size from approximately half an inch to two inches long, were carbon-14 dated to be from around 15,700 years ago. This is about 3,000 years older than the Clovis fluted points that have been found throughout North America, and 2,300 years older than the points previously discovered at the same site. The projectile points were found at the Cooper's Ferry site, located along the Salmon River and on traditional Nez Perce land known as the ancient village of Nipéhe. In addition to the projectile points, the archaeologists also found simple flakes and pieces of bone at the site, indicating human presence around 16,000 years ago. But, the discovery of the projectile points reveals a more advanced level of technological expression and thought among the first Americans at that time. The projectile points are also notable for their similarity to those found in Hokkaido, Japan, which date back to 16,000-20,000 years ago. This similarity adds further support to the hypothesis of early genetic and cultural connections between the ice age peoples of Northeast Asia and North America. 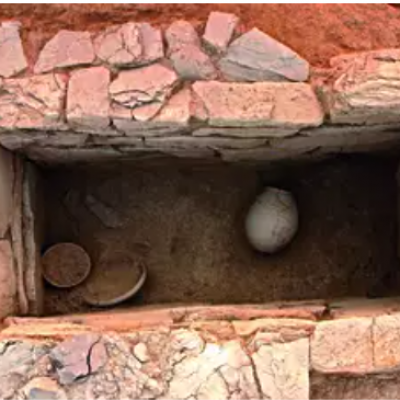 Juna Khatiya - The digging began in 2019 at Juna Khatiya village, about 30km from Lakhpat in Kutch district, and archaeologists found rows of graves with skeletal remains, ceramic pots, plates and vases, beaded jewellery, and animal bones that piqued their interest. Over time, it emerged as one the biggest Harappan burial sites, with the possibility of 500 graves, of which about 125 have been found so far. These are from 3,200 BCE  to 2,600 BCE, predating Dholavira—a Unesco world heritage site—and several other Harappan sites in the state. The site is important because others like  Dholavira  have a cemetery in and around the town, but no major habitation has been discovered near Juna Khatiya. The site demonstrates the transition from earth-mound burials to stone graves. The pottery from the site have features and style similar to those excavated from early Harappan sites in Sindh and Balochistan. “The artefacts can put the site in perspective of other pre-urban Harappan sites in Gujarat. The rectangular graves were made of shale and sandstone, which are common rocks in the area, and other than items like clay bowls and dishes, prized possessions like beads and bangles of terracotta, seashells, and lapis lazuli were interred with dead.“The majority of burial pits had five to six pots. In one, 62 pots were found. We have not found any metal artefact from the site so far,” said Rajesh. “Some of the burial structures have boulders of basalt as coverings. Pebbles of local rock, basalt, soil, sand, etc were used for construction, and clay was used to bind them together.

DANEMARK - Hune - Archaeologists uncovered the remains of what they believe may have been a Viking Age hall near the village of Hune in the north of the country. The hall, which likely dates to the last half of the ninth century or the beginning of the 11th century, measured up to 40 meters long and between eight and 10 meters wide, according to the researchers. The hall included 10-12 oak posts stabilizing its roof, each measuring up to 90x50 cm. Moreover, Knudsen said the hall was larger than typical homes, indicating it was a prestigious building. The hall bears a resemblance to houses found at castles belonging to Harald I, also known as Harald Bluetooth, the king of Denmark between 958 and 985 CE. The researchers believe the hall and nearby homes that have yet to be found may be part of a farm belonging to the family of Viking Runulv den Rådsnilde, which was one of the most powerful families in the area. "We only had the opportunity to excavate part of the hall, but there are probably several houses hidden under the mulch to the east. A hall building of this nature rarely stands alone," Knudsen said. The researchers reached this hypothesis because a Viking Age rune stone was previously found that is thought to have originated from the area, engraved with the words "Hove, Thorkild, Thorbjørn set their father Runulv den Rådsnilde’s stone."

ALLEMAGNE - Germering - A wood-lined well from 3,000 years ago during the Bronze Age was found during construction operations in Germering in Bavaria. Researchers found metal spirals, an animal tooth pendant and over 70 ceramic vessels in the sediment layers at the bottom of the well. The vessels include bowls, pots and cups of the variety often found in burials from the Middle Bronze Age, all of which were completely intact, indicating they were handled carefully. The researchers believe that the items were meant as sacrifices for the harvest. A study of sediments and organic material in the well suggested that it was used during an extended period of drought and poor harvest yields. The researchers believe this may be why the extravagant artifacts were left in the well as ritual offerings.